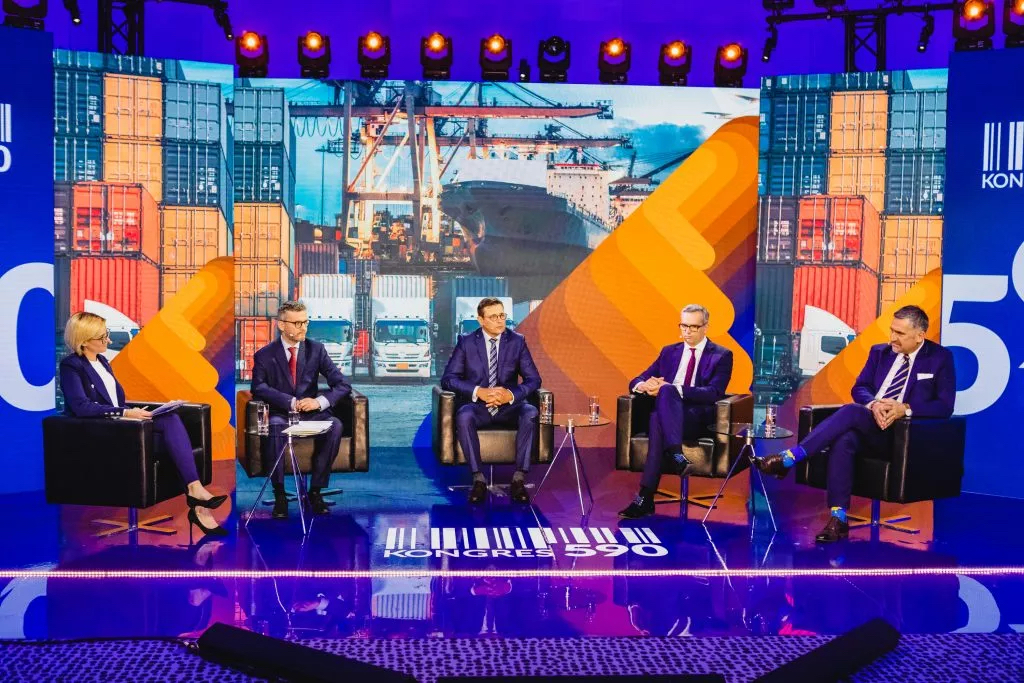 “The Port of Gdańsk as a window on the world of code 590 goods. Towards synergy and unleashing the potential of Polish exports” – this was the theme of a discussion panel that formed part of the 5th edition of Congress 590, held with the participation of Łukasz Greinke, President of the Port of Gdańsk, Grzegorz Witkowski, Under-secretary of State in the Ministry of Infrastructure, Krzysztof Drynda, President of the Polish Investment and Trade Agency and Tomasz Olenderek, a member of the management board of Krajowa Spółka Cukrowa S.A. The debate was chaired by Anna Drozd, press spokesman for the Port of Gdańsk.

During the panel, experts discussed how the pandemic affected supply chains, the opportunities and threats associated with this, as well as the dynamic development of Polish ports, their importance in Polish logistics, as well as increasing the potential of Polish exports.

Krzysztof Drynda, president of the Polish Investment and Trade Agency (PAIH), assured everyone that the Polish economy passed muster despite the pandemic. “Over the last 10 years, the volume of Polish exports has increased by about 130%, and since around 2015 we have had a surplus of exports over imports, which in the last year was over PLN 50 billion. Without a well-run maritime economy, without strong ports, we would not have had such investments as Northvolt in Gdańsk, which would not have had decided to build its factory in Pomorze without a well-functioning port.” The PAIH president reminded everyone about the agency’s cooperation with the port of Gdańsk. In 2018 the port opened a commercial office in the heart of the Chinese economy, in Shanghai. “Together we are attempting to gain new contracts for Polish entrepreneurs. Of course, this translates directly into the development of the port itself. Anyway, if we consider PAIH’s network of foreign commercial offices, and we operate in 70 markets, we can see that we are present in all those countries having the largest seaports in the world. If we check where ships sail to from Gdańsk, it coincides with the network of foreign commercial offices. The synergy effect is what we can achieve together in the context of increasing export volumes.”

Key issues were also raised by Grzegorz Witkowski, Deputy Minister of Infrastructure, who stressed how important was and is, from the point of view of the global pandemic, the flexibility of entrepreneurs and port operators. “It is essential for the whole of the operator activity to rely on several anchors. If a market or a cargo that the port used to specialise in collapses, it is very difficult to remodel the port within a few months so that it can continue to operate smoothly. That’s why the port never sleeps, it works all the time. The Baltic Sea is becoming a base for the enormous market of Central and Eastern Europe. Gdańsk and the entire coast are a large window on the world. That is why it is worth investing in ports.”

There have not been such large and high-cost investment programs in the port of Gdańsk since the 1970s. “Our task is primarily to create opportunities. We always try to understand our contractors and their needs so we can achieve our goals together. If cargo administrators are sure that we have a modern infrastructure that enables them to handle goods, Gdańsk will become the port of first choice. Figuratively speaking, we are like a beating heart that needs a circulatory system, the entire road and rail network,” explained Łukasz Greinke, President of the Port of Gdańsk. “Therefore, we need to modernise the port infrastructure so that investing in our port pays off, so that sending goods out into the world is economically viable.”

Currently, almost 5 km of the quays in the Inner Port are being modernised. The redevelopment of the road and rail system in the Outer Port has been completed. Over the last 5 years, investments have consumed over PLN 1 billion. Public institutions such as the Maritime Office (building new fairways to the port, new breakwaters) and PKP PLK (a railway system leading to the port gates) also invest in the port.
“The sum of all these investments is nearly PLN 3.5 billion. That is a really huge amount of money, and is already being put to real use in the port,” adds Łukasz Greinke.

Contractors also invest. One example of good cooperation with the Port of Gdańsk and the fact that Polish products can be present in the world is Krajowa Spółka Cukrowa S.A., which in the port built the most modern terminal in Europe. Thanks to this investment, Polish sugar reaches markets all over the world, right through the port of Gdańsk.

“Global business has begun to see and judge us in a completely differently way than previously. We now sell sugar ourselves in the most remote places in the world. In the port of Gdańsk there is a great atmosphere for doing business, as we already know through the partners with whom we cooperate. We conquered the Middle East market, we are sending sugar to Egypt, central Africa and Israel, because we are in Gdańsk. When buying sugar in Tel Aviv or Hebron, there is a 50% chance that it is Polish sugar,” said Tomasz Olenderek, a member of the management board of KSC.

Soon other contractors will join the port team. In 2019, on the occasion of Congress 590, the Port of Gdańsk signed an agreement with Cedrob, specialising in poultry production, for the construction of an automatic high-storage freezer in the port. “We are also talking to the dairy industry, because we see that food products are very successful in the world. We have a need for warehouses that are able to handle these types of cargo,” explained Łukasz Greinke during the debate.