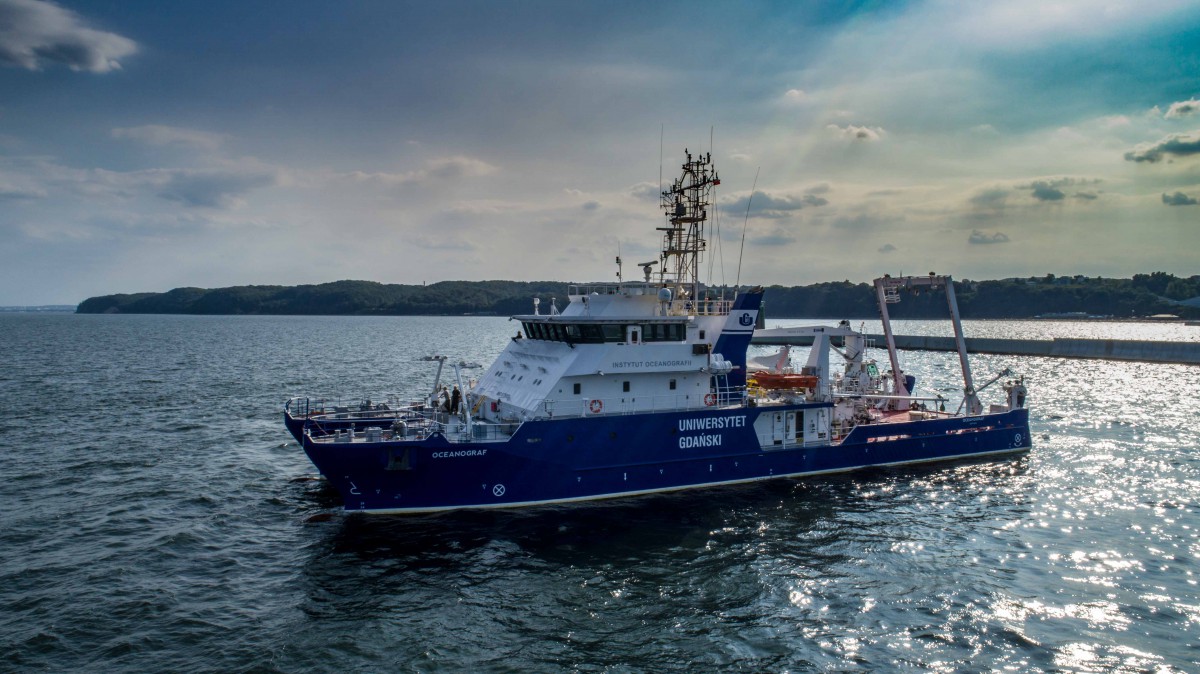 Oceanograf, a modern science and research ship of the Institute of Oceanography at the University of Gdańsk, started his duty. Although scientists are still exploring the vessel’s capability,  research into the environment and nature of the Baltic Sea is already being carried out there. We spent the day aboard this modern catamaran. It's truly impressive.

- Oceanograf has a very wide field of activity. It is equipped with equipment for testing the seabed and also for catching fish - trawls are used for this purpose. The range of possibilities is very large - says Daniel Sieńko, captain of the Oceanograf ship.

He added that the ship's capabilities can still be developed and it can be equipped with new equipment. - At the moment, ship sailed about 1.5 thousand miles on the waters of the Gulf of Gdansk - he said.

Oceanograf received a security card from the Maritime Office in Gdynia on May 15 this year, and a day later he set out on the first cruise on the waters of the Gulf of Gdansk.

The modern science and research ship of the University of Gdańsk is 49.5 m long, 14 m wide and 2 m deep. The side height of the unit is 3.8 m, and the height to the upper deck is 6.55 m. The ship has a diesel electric drive: Volvo units (two 420 kW and two225 kW) and Schottel propulsors (two stern Azimuth propulsors and two bow propulsors). The economic speed of the new vessel is 10 knots.

The range at an economic speed is 2 500 nautical miles, and the autonomy of shipping reaches 21 days. Oceanograf's home port is Gdynia. The ship can take on board up to 20 people.

The construction of the Oceanographer at the Nauta Remontowa Shipyard in Gdynia began in May 2013. Launching of the ship took place in June 2015, and it was christened in 2016.

As reported by dr. Aleksandra Brodecka-Goluch, assistant professor at the Marine Chemistry and Marine Environment Department at the Institute of Oceanography,  project currently is being carried out in cooperation with physicists from IO UG and IO PAN on the presence of methane in the Gulf of Gdańsk sediments and the environmental consequences associated with it. The project manager is prof. Jerzy Bolałek.

- Methane is a compund that tells us a little about how eutrophication is going, whether this bottom zone is contaminated or whether we can expect oxygen deficits - says dr. Aleksandra Brodecka-Goluch.

She reported that if methane is present in the sediments, "then we can say that the bottom, sedimentary environment is degraded, there is a lot of organic matter that decomposes." The project will be implemented by mid-2020. Its results will allow for the control of the studied areas in terms of various geochemical and physical parameters, and observation of changes in the marine environment.

Oceanograf replaced the worn-out K / H Oceanograf-2 vessel. The ship is designed to conduct interdisciplinary research on the environment and nature of the Baltic Sea: biological, chemical, physical and geological research, and to conduct didactic classes for students in the oceanography and other fields. Vessel contains laboratories: wet, measuring, sterile, thermostated, as well as a seminar and computer didactic room. The region of the catamaran is the Baltic Sea, but excursions to other regions are not excluded.

In addition to scientific and didactic goals, UG also offers extensive opportunities for commercial use of the ultra-modern ship in business projects.

The Institute of Oceanography, Faculty of Oceanography and Geography of the University of Gdańsk, conducts interdisciplinary research in the coastal zone of the shelf seas. They are concentrated mainly in the area of the southern Baltic and the Gulf of Gdansk, as well as in the polar regions. Thanks to the conducted research, the Institute collects and develops the knowledge necessary to support the sustainable use and protection of the marine environment. At present, there are 1,454 students and PhD students studying at the Faculty of Geography and Oceanography at the University of Gdańsk.