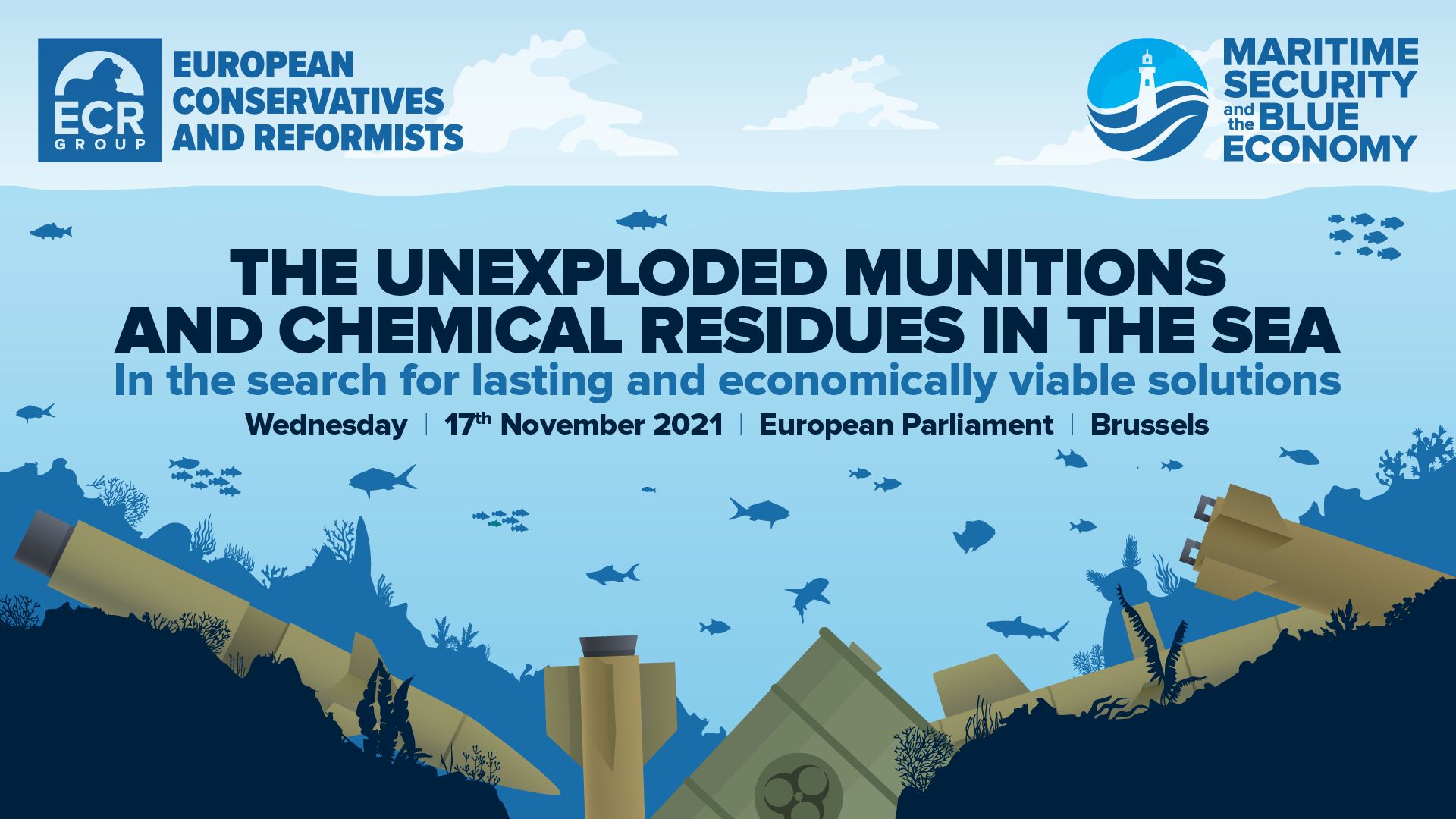 Fisheries, Aquaculture, Marine Ecology
The ECR Group in the European Parliament invites to an online conference about unexploded munitions and chemical residues in the sea [AGENDA]

The European Conservatives and Reformists Group (ECR) in the European Parliament invites everyone on Wednesday (November 17) from 10.00-15.45 for the online conference "Maritime Safety and the Blue Economy. The unexploded munitions and chemical residues in the sea – in the search of lasting and economically viable solutions". The organizers encourage to submit your own questions today. The event will be hosted by MEP Anna Fotyga. What's on the agenda of this important to the maritime industry debate?

The organizers provide for the possibility of asking questions in writing or in a short video form. They should be sent to: ECREvents@europarl.europa.eu.

- The complexity, scale and threat of sunken chemical weapons requires action at the European level - argues MEP Anna Fotyga, who will host the ECR Maritime Security and Blue Economy conference devoted to this alarming threat.

And, as she points out, in many places around the world, unwanted chemical and conventional ammunition was discharged into the sea. Most of the episodes of dumping the materials occurred after the end of world wars, when unused war supplies needed to be disposed of. These threats did not disappear deep beneath the sea. They still affect the Baltic Sea, the North Sea, the Adriatic Sea, as well as the Atlantic coast of the United States and Canada.

- Munitions dumping in the past decades continues to be a problem for Australia and Japan. Conventional and chemical weapons endanger human life and the marine environment. These compounds also threaten fishing and navigation. They hinder the development of offshore energy, aquaculture, shipping, tourism and other blue economy sectors. Due to, inter alia, incomplete documentation regarding the number and places of dumps, it is not possible to determine the exact amount of chemical munitions lying on the seabed - the politician enumerates.

Landfills contain toxic substances such as mustard gas and pose a serious threat to the environment and people. In addition to ammunition, there are also hundreds of shipwrecks where progressive corrosion poses a risk of leakage of fuel, petroleum products and poisonous warfare agents. All of this could cause an ecological disaster in many European waters, especially in the large poisoned areas of the Baltic Sea, which many consider to be the most polluted waters in the world.

- That is why last year, together with dozens of MEPs from six political groups from all Baltic countries and beyond, we called on the President of the European Commission, Ursula von der Leyen, to take urgent action, proposing nine precise recommendations - reminds Anna Fotyga.

- The entire European Parliament intensified our appeal with a special resolution adopted a few months ago. The document was supported by 660 MPs, with only eight votes against, a clear signal of broad political support for urgent action.

The European Union has many years of successful experience supporting de-mining activities around the world, including in the Balkans, Africa and Asia. So there is a knowledge and experience base that can be drawn from and that can be adapted accordingly.

- I am convinced that dumped ammunition and chemicals can be another example of a positive and effective EU commitment in this regard, especially as this threat lies in many European waters. This problem is not unknown to the European Commission. In 2019, I took part in a colloquium on the challenges of unexploded ordnance at sea, which was an important step in the exchange of experience and knowledge between stakeholders. We expect a stronger follow-up set after the in-depth study launched by the Commission this year, he points out.

She adds that even today such measures are fully in line with the objectives of the EU Maritime Security Strategy Action Plan (EUMSS), under which Member States and the Commission promotes exercises and training programs, including the involvement of relevant regional organizations, to optimize the removal of dumped chemical munitions and unexploded ordnance. There is, of course, a wider legal framework that requires action, such as the Marine Strategy

Framework Directive or the HELCOM Convention for the Protection of the Baltic Sea.
Removing chemicals from the sea is a must

Experts and stakeholders agree that removing old conventional and chemical weapons from the seas and oceans is a must. Elements that also press for acceleration and decisions in this area are changing ocean temperatures, salinity and density levels, which have an unknown effect on dumped munitions.

- If we add to this the progressive expansion of the use of the sea by humans for energy, aquaculture and other resources, we will face an increasingly urgent question of solving the problem of ammunition and chemicals in the seas. As it is an extremely complex and delicate challenge, views on how to deal with it are divided, and engineers, scientists, policymakers and financiers are currently debating the best strategies for the safe destruction of weapons. Some experts say the ammunition should be left in place, but it should be properly secured against leakage and corrosion, others say it should be removed or neutralized - argues Fotyga.

The ECR focuses on maritime safety

The Group of European Conservatives and Reformists pays particular attention to maritime security and the blue economy. This year, in recognition of the importance of the problem, the pressure of time and the need to raise awareness of the threat among policy makers, the annual maritime conference will be devoted to this topic, hosting stakeholders and leading experts from around the world. Guests will evaluate the legal framework and global attempts to counteract the threat, and will present the most up-to-date knowledge.


Panel II: Unexploded ordnance and chemical residues in the Baltic Sea - the state of play and call for further actions @ 12:30 CET

Ambassador Vaidotas Verba, Head of Mission of the Republic of Lithuania to the International organizations in Vienna

Claus Böttcher, Ministry for Energy Transition, Agriculture, Environment, Nature and Digitization of Schleswig-Holstein, Coordinator of the Knowledge Hub "Munitions in the Sea"


More information is available on the website of the ECR Group.

Save the date and send your questions in written format or a short video to ECREvents@europarl.europa.eu.