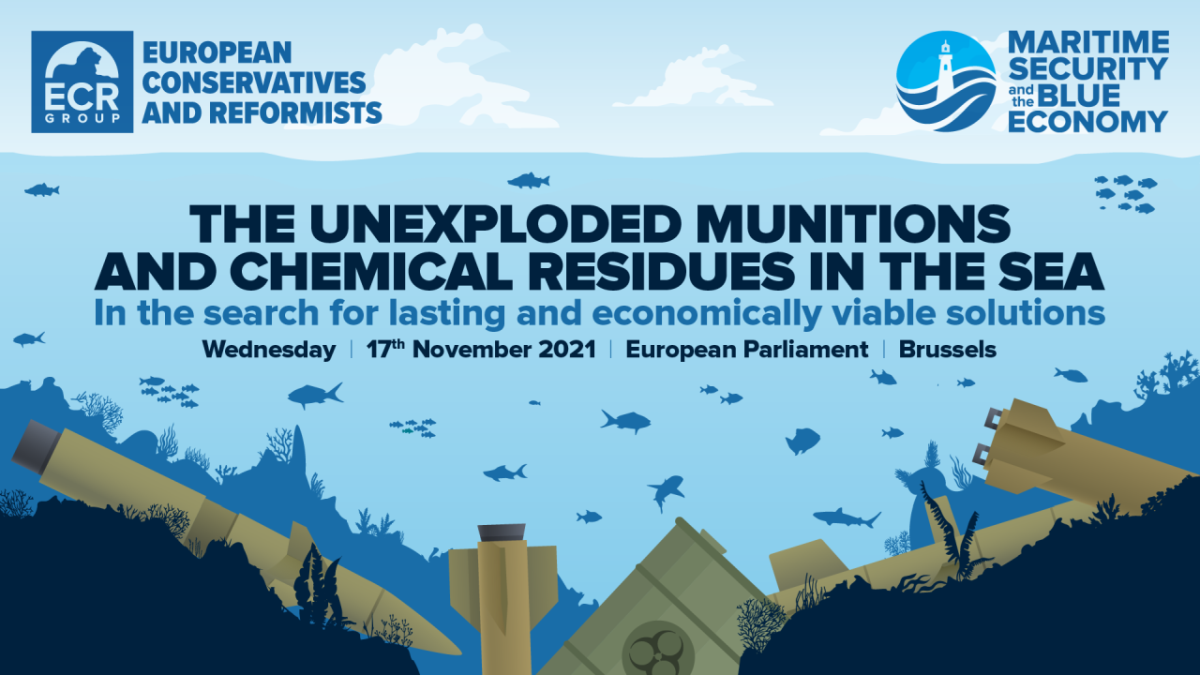 Maritime Affairs, Law, Policy
In Brussels about weapons sunk in the Baltic Sea. Removal technology is ready, now let's all work together

For many years, research has been carried out on the Baltic Sea in terms of dumped ammunition. However, there are still no specific actions aimed at neutralizing combat assets, as well as international regulations concerning them. The international community, however, finally addressed the problem.

One of the activities aimed at exchanging knowledge, searching for cost-effective solutions to the problem of the ammunition lying on seabed and establishing a platform for international cooperation, was the conference "Maritime safety and the blue economy. Unexploded munitions and chemical residues in the sea - in the search for lasting and economically viable solutions", which took place on November 17, 2021 in the European Parliament. The conference was organized by the European Conservatives and Reformists Group (ECR) and hosted by MEP Anna Fotyga. It was possible to participate in the meeting live thanks to the online broadcast.

The conference began with the speeches of the EU Commissioner for Environment, Seas and Fisheries, Virginijus Sinkevicius, and Poland's Deputy Prime Minister Jacek Sasin. Both politicians emphasized the importance of the problem and the need for joint, coordinated actions.

- As a result of the war that has been fought for almost 6 years, now there are approx. 50,000 tons of chemical weapons, 500,000 tons of conventional weapons and even 10,000 wrecks with fuel leaks at the bottom of the Baltic Sea. Today, more than 76 years after the end of the war, sunken chemicals, ammunition and wrecks are a ticking ecological bomb that can release deadly substances at any moment. Their leakage may cause an ecological disaster on an unimaginable scale, and the Baltic Sea as we know it today will cease to exist. This is a real threat to the generation of our children and grandchildren. We cannot wait and pass this responsibility on to future generations. The Baltic Sea is our national good - said Sasin.

The Deputy Prime Minister emphasized that Poland was taking steps to solve the problem, but would not be able to deal with it alone.

- Poland cannot be left with this problem alone, because, it should be emphasized, it was a victim of the countries that own the weapons that are currently at the bottom of the sea. Due to the enormous threat, the involvement of the European Union, NATO and the United Nations is indispensable - he said.

Panel I. International agreements do not deal with the removal of sunken weapons

The first panel at the conference was devoted to outlining the rank and size of the problem. Terrance P. Long, CEO of the Canadian International Dialogues on Underwater Munitions, in his introduction recalled where the problem of sunken weapons actually came from - until the 1960s it was considered that sinking was the best way to get rid of it.

The discussants focused on legal issues related to the problem. Fredrik Haag confirmed that official regulations have so far not addressed the problem of extracting and neutralizing the ammunition lying at the bottom. Herman Lammers talked about the differences in procedures that may occur between military and civilian organizations and Cpt. Bartłomiej Pączek reported on the work on disseminating the basic rules of conduct in the event of encountering dangerous materials, e.g. by fishermen.

An interesting and important voice was the report from Dr. Margo Edwards who participated in the program of a search for unexploded ordnance ped near Hawaii. Edwards described the seabed surveys carried out as part of it and their results. Mustard gas missiles were ped near the island of Oahu after World War II. The team, which Dr. Edwards was part of, tried to find as many of them as possible, determine the degree of their corrosion and their impact on the natural environment. This was possible thanks to the use of manned submarines, later changed to remotely operated ROVs.

The panel began with an introductory speech by Ambassador Vaidotas Verba, Head of Mission of the Republic of Lithuania to the International Organizations in Vienna. Verba began by saying that the dangers of unexploded ordnance and sunken chemical weapons are obvious, but not everyone is aware of it. He also described the steps taken by the European Commission to encourage the various parties to look at the problem.

All panel participants emphasized that despite the actions taken by various institutions at the national and international level, top-down initiatives are needed. Iglika Yakowa described the research process that began after the 2019 munitions colloquium, which already produced a preliminary map of landfills in the Baltic Sea. Yakova assured that the results of the research will soon translate into actions. Ambassador Poznański reminded that the issue of creating a special team to deal with this issue was raised, as well as the impact that the objects from the seabed have on human health. - We must collect all available data, we must summarize it and conduct a comprehensive risk analysis - added Poznański.

The research conducted by her team was also reported by prof. Paula Vanninen. The result is a map of pollution in several areas of the Baltic Sea and the discovery that the samples contained other chemicals from weapons, much more toxic than those previously described in the literature. - All our research is based on hypotheses. It may be that the chemicals are biologically processed and transformed into other compounds. 14% of the aquatic animal muscle samples analyzed contained contaminated particles -Vanninen said.

Prof. Jacek Bełdowski called for a pan-European program with adequate funding. He also mentioned that there is a technology that could solve the problem, but is not necessarily ready. Each of its elements should first be tested in the environment in which it will be used.

Professor Bełdowski also referred to the known weapons dumps in the Baltic Sea. The largest of them are located in the Gotland and Bornholm Deep, but there is also a landfill in the Gdańsk Deep. - Before, there were only rumors and stories passed between seafarers and scientists. But when we went to the site and examined the sediment samples, we saw that chemical agents typical of warfare agents appear there - he said.

Panel III. We don't have to invent anything anymore

The third discussion panel was important from the point of view of future activities aimed at clearing the Baltic from weapons. It was devoted to technologies that can provide cost-effective solutions. The moderator of this part was MEP Kosma Złotowski. The conversation was started by Claus Böttcher from the Ministry for Energy Transition, Agriculture, Environment, Nature and Digitization of Schleswig-Holstein, Coordinator of the Knowledge Hub “Munitions in the Sea”.

- There's nothing we need to think of. These technologies already exist - Böttcher began. - We have certain solutions, concepts and prototypes that allow us to deal with dangerous objects under water or to dispose of chemicals contained in weapons on the sea floor - he added.

Böttcher presented several of these technologies, including an air curtain to mitigate underwater explosions, multi-purpose remote-controlled underwater robots, and special devices that can help lift objects from the bottom. He also said that there are already prototypes of special underwater rovers that are being tested and have brought mines from the seabed to the surface.

These words were confirmed by subsequent performers. Charles Diggs, CEO of the American company Dynasafe, proposed several concepts and showed, among others, the concept of a flat-bottomed vessel for extracting and decommissioning weapons from the seabed, proposed by Polish shipyard Remontowa Shipbuilding. He also described step by step the entire process, which begins with locating the weapons at sea and examining them. Subsequently, it should be excavated, inspected and stored in appropriate conditions until work on its destruction begins, possibly already on land. For this purpose, it will first be re-inspected and disassembled into appropriate elements, and finally destroyed in a manner dictated by the type of weapon. The final stage is waste disposal.

Łukasz Porzuczek from the GeoFusion Group described a robot that is able to get closer to the sampling site without the propellers causing a cloud of contamination, as well as chemical weapons storage containers. President Porzuczek mentioned that for various technical reasons, not all chemical weapons could be detected. Therefore, the unit on which the entire weapons decommissioning system is installed is to be on duty during the entire investment process of building the wind farm. - The unit is to be on duty 24 hours a day, 7 days a week and in the event of contact with chemical weapons, arrive, decontaminate and dispose of - he said. The system is housed in containers with the dimensions of standard sea containers, so it can be installed on any vessel with adequate space.

The last panelist was Anna Lutek, PR and Communication Director at the Enea Group. Lutek talked about the educational campaign concerning ammunition at the bottom of the Baltic Sea, which Enea plans to organize. - We want to monitor the test results. I think there will be tons of information that we will be able to pass on to the public - said the representative of Enea.