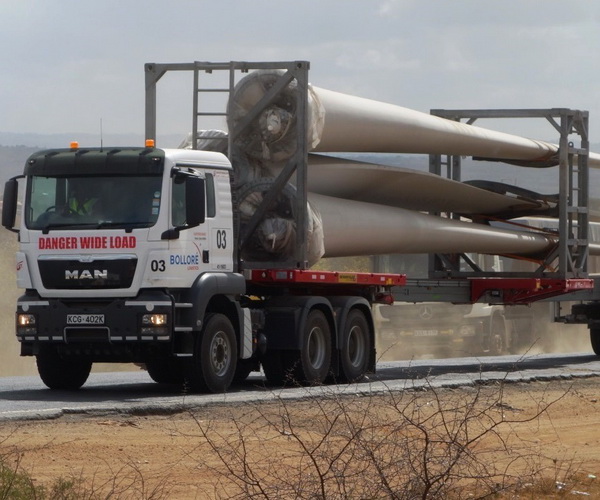 The delivery of 365 Wind Turbine Generators at the Lake Turkana Wind Power Project has been completed. Bolloré Transport & Logistics Kenya subsidiary which was contracted to provide customs clearance and logistics services for the Lake Turkana Wind Power Project transported 365 Wind Turbine Generators in 360 days, 5 days before the scheduled completion date. ​The project, which began in March 2016, involved customs operations, vessel discharge and transportation of wind turbine generators from the port of Mombasa to the project site in Loyangalani District, Marsabit West County, located 1,220 km from Mombasa. The highly sensitive shipments were massive in weight and size, and required specialized equipment to handle. To reach those requirements, Bolloré Logistics invested in heavy assets including 40 extendable trailers, 60 6x4 trucks, and 20 low loader trailers, all with air suspension as well as specialized cranes. Speaking at an event hosted by Vestas Wind Systems, one of the project’s co-developers and suppliers of the turbines, Bolloré Transport & Logistics Regional CEO for East Africa, Jason Reynard commented on the massive scale of the project: “Our fleet of trucks and trailers successfully made 1,340 trips from Mombasa, covering 3,320,000 km over a period of 360 days to deliver the 365 Wind Turbine Generators. I am happy to report that all this was done with zero accidents or lost time injury reported.” A team of 200 operators were dedicated to the project, including 31 persons specifically hired from the communities around Loyongalani. A total of 373,700 man hours were spent on the project since September 2015, and no lost time injuries were reported. “Bolloré Transport & Logistics is very proud to be associated with this flagship project which will result in cheaper, cleaner energy to fuel Kenya’s development” said Jason Reynard. Once complete, the Lake Turkana Wind Farm is set to become Africa’s largest wind power plant, providing an additional 310MW of power to Kenya’s supply grid, enough energy to power an additional 1 million Kenyan households.