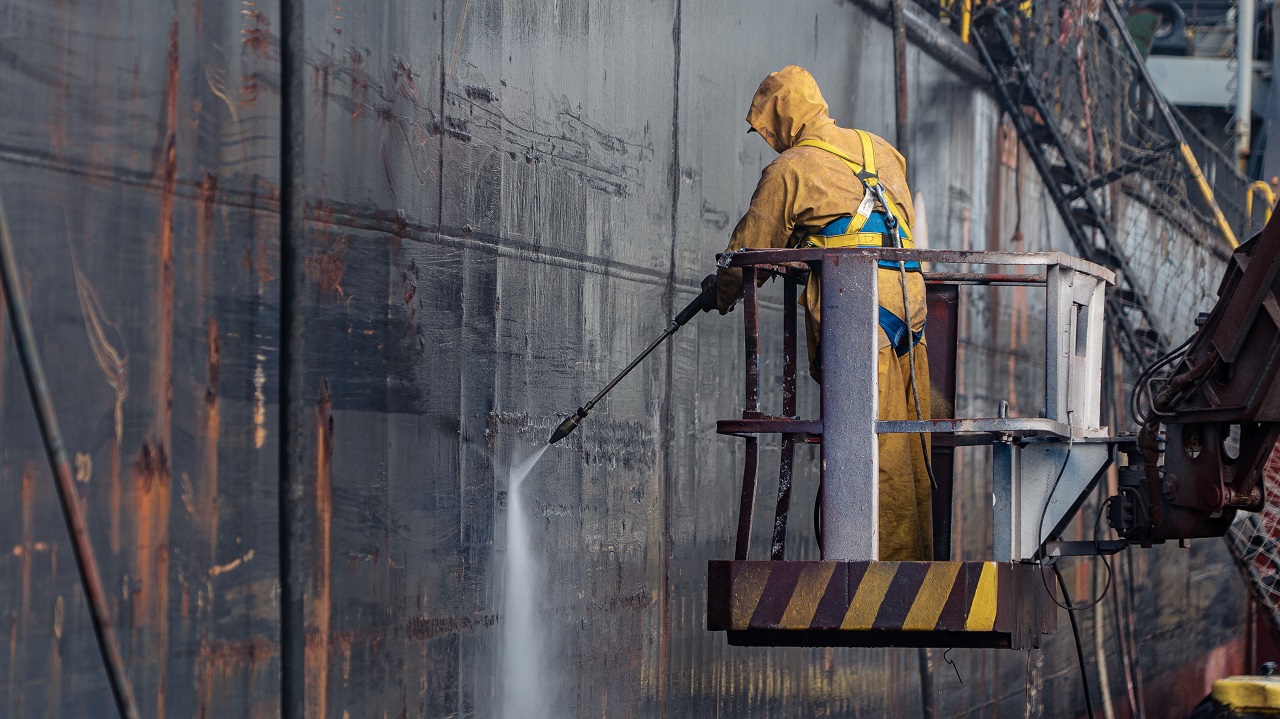 Maritime Education and Training, Crewing
The Gdynia Maritime School prepares you to work safely in offshore. There are still many gaps in the regulatory field

Polish regulations concerning the safety of future employees of offshore farms are in a vacuum. The regulations on the use and introduction of equipment to work in the Polish economic zone in the Baltic Sea also require studies. - The maritime administration must create a permanent expertise algorithm that will be objective and, above all, include high safety standards. We should not allow the basic version of these regulations to be created by investors. The costs of accidents at sea due to failure to comply with safety requirements will be on the Polish side - appeals Alfred Naskręt, director of the Gdynia Maritime School.

The construction of offshore wind farms in Poland is approaching fast. At the same time, the topic of who will design and build a self-lifting unit for the construction of Polish turbines at sea is open. Polish companies still have such a possibility, but it is possible that the jack-up will come from abroad.

The key thing, however, is that in each of these cases, this four-legged vessel must meet the requirements necessary to work in the Baltic Sea. The case is complex for several reasons.

- Simply put, not every jack-up can work anywhere and set legs anywhere. The owner of the vessel, before starting work, must receive a detailed analysis of the seabed, showing what its features are and whether the vessel's work will be compatible with it, safe for the crew and the marine environment - explains Przemysław Szczepanik, a captain with 20 years of work experience in offshore. - Choosing the right jack-up is therefore extremely important in the process of safe and timely construction of a wind farm.

As it turns out, the bottom of the Baltic Sea is not a very simple material to work with. It resembles the North Sea with its multi-layered, relatively soft structure.

- Such expertise and seabed research are carried out by external companies. Obtaining them is also necessary to provide insurance for the unit. Thanks to them, we obtain a number of extremely valuable data. One of the most important information is how deep the legs of our vessel will sink to the ground. And it depends on the loading and the weather conditions prevailing in a specific water area - says the captain.

Legal regulations for offshore. There is a lot to do

There are regular discussions on the requirements that jack-up owners must meet, including during the webinars organized in Scotland since the beginning of the year under the patronage of the Foreign, Commonwealth & Development Office. They are attended by, inter alia, companies that will take part in offshore investments.

- I participate in them too. These lectures can be used by everyone involved in the process of building farms in the Baltic Sea. It is a platform for sharing knowledge and experiences for everyone in the industry. Just go to the sdi.co.uk website - informs Przemysław Szczepanik.

However, there are a number of courses and training that must be completed by those who work both in the construction of farms and their further servicing. And all this to ensure the safety of farm operations.

- For example, if the captain of a ship makes a mistake and consequently causes a sea collision with the structure, the vessel is no longer usable because the jack-up leg collapses. The crew is evacuated and the legs are most often damaged. You can only cut them off and dismantle the structure, you need a new jack-up to work. And these are enormous costs for the owner of the vessel, not to mention the safety of the crew. Hence, adherence to legal rules and the so-called good sea practice is so crucial - emphasizes the captain.

What rules are we talking about and who is imposing them?

The legal regulation that is already in force in Poland on the basis of the Journal of Laws is the regulation on the promotion and production of energy. According to it, the following expertise is required: navigation, technical (how the marine farm will affect the area) and expertise in the field of the impact of marine farms on the National Security System.

- And here we have a big problem. Currently, it is still unclear how we, as Poland, will secure the rescue of wind turbine workers. Laws are needed, for example, on how people will be assisted in the event of numerous incidents that may occur in the workplace. How to act when an employee suffers a heart attack, collapses or sprains his ankle? Will he even be "imprisoned" due to bad weather that made it impossible to change the crew for several days? All these procedures must be prepared by the maritime administration, and in our case it is the task of the Maritime Office in Gdynia - reminds the captain.

It is necessary, inter alia, to form a rescue plan providing for the scope of duties in the event of an accident at sea, or a dynamic system of permits to undertake work on a wind farm, taking into account the possibilities of the offshore vessel and weather conditions.

Pollution generated by farms is another matter.

- We are talking, for example, about potentially emergency situations, such as oil spill into the sea or its leakage. Today, we do not know how such events will be classified, whether wind turbines will be artificial islands, or whether they will be treated as drilling rigs that are subject to MARPOL regulations, who will be obliged to secure them, and who will be responsible for consequences. There are no local regulations that will leave no legal doubts in the resolution of the above-mentioned events - says Szczepanik.

Courses for offshore workers. Gdynia Maritime School already has them

Training according to GWO standards is a basic safety course.

- Everyone who enters a wind farm must take a GWO course - emphasizes Alfred Naskręt, director of the Gdynia Maritime School, recalling that his institution has been conducting such courses for almost ten years.

- The next training is STCW. It is dedicated to seamen and crews of ships serving the farms. Yet another important course concerns rescue from a sinking helicopter, known under the banner of HUET/BOSIET, as well as DP(Dynamic Positioning) training for deck and engine officers who keep navigation and engine watches on vessels equipped with DP systems.

- We can boast of mobile simulator of a self-supporting unit, accredited by Nautical Institute. Thanks to training with its use, students can practice all the tasks that are performed on a vessel at sea when building wind turbines, as well as in the port when loading their elements - explains director Naskręt.

- It must be clearly stated here that these standards are not imposed in Poland. There may be times when specific offshore companies require them. Nevertheless, for work in Polish offshore to be safe, we should use the experience of other countries, not ignore them and adapt them to our conditions, which, as already indicated, are not so friendly - explains Przemysław Szczepanik.

- So there are two possibilities. Adopt the basic standards and adapt them to this "for good measure". However, the maritime administration must impose these legal rules and then require them - adds Alfred Naskręt.

Currently, the procedures for employee safety (the above-mentioned GWO and STCW courses), as well as the use and introduction of equipment to work in the Polish economic zone in the Baltic Sea, are an open issue.

- The issues of saving people from wind farms need to be clarified. The basic question is, how is our SAR rescue service prepared for typical wind farm accidents? Let's face it, dangerous events are rare. However, statistics say that 31 percent of accidents is the result of the instability of the sea soil - reminds the captain.

The interlocutors point to the possibility that the expert opinions on all these regulations - in the event of slowness on the part of the maritime administration - can also be created by the investors themselves.

- And that wouldn't be the best scenario. We are afraid that then the regulations will be created in an extremely poor version, which is closer to the interests of investors. And this, of course, depends on time, because time is money. We believe that the safest option would be to create a permanent algorithm for such expertise that will be objective and, above all, include high security standards, argues Alfred Naskręt. - Otherwise, the costs resulting from accidents at sea due to failure to comply with safety regulations will be on the Polish side - warns the director of the Maritime School.

Maritime Office. There are seven sites for offshore wind farms

We asked the Gdynia Maritime Office about the stage of the works - what has been done and what is still ahead of the administration.

As part of this plan, seven locations have been designated where it is possible to establish offshore wind farms.

- It is an area with a total area of 2,310 km2. In terms of approvals and permits, our office is authorized to issue location decisions for laying submarine cables in the area of internal sea waters and the territorial sea. We have issued seven such decisions so far. We also issue opinions on location arrangements issued by the Minister of Infrastructure for the buildings themselves - he informs.

And, adds director Piotrzkowski, as part of the entire project of building the OWF, the Maritime Office in Gdynia will also approve expert opinions and plans for navigation, as well as the impact of the farms themselves on the GMDSS PL emergency communication system, on the SAR operational communication system, on the National Maritime Safety System, as well as their impact on the rescue plan and the anti-pollution plan, for which the SAR service is responsible.