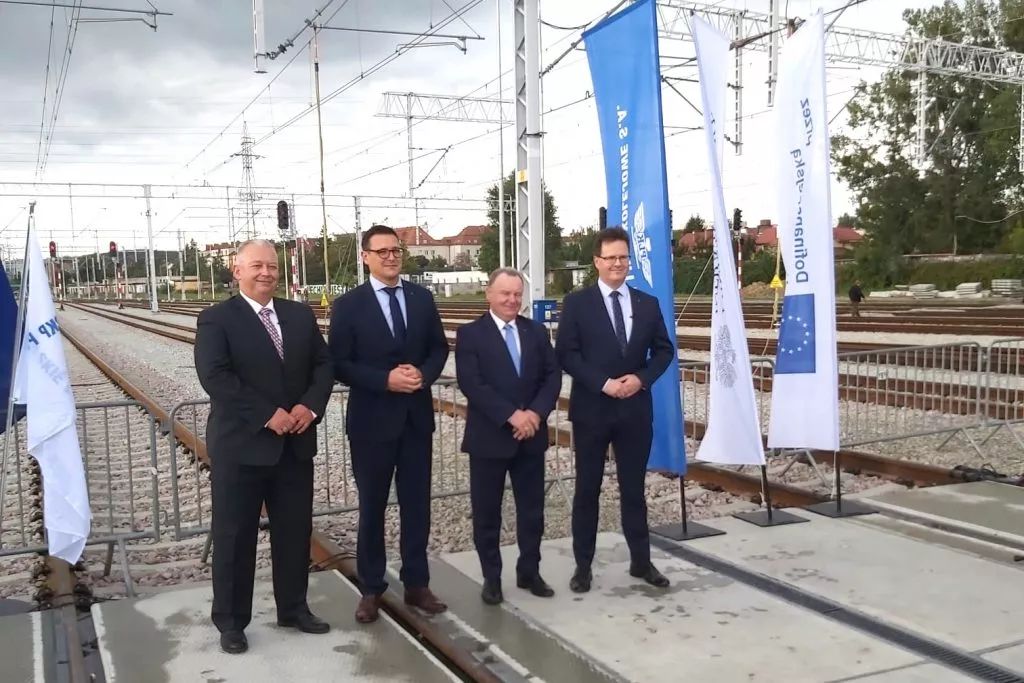 More efficient railway to the Port of Gdańsk

The investment of PKP Polskie Linie Kolejowe S.A., amounting to more than one billion PLN with the participation of the Union CEF Connecting Europe Facility, improves the link between the quays and the rail network, increases the potential of Polish ports and the development of the economy. Exhibition tracks used at TRAKO Fair are more available.

The exhibitors and visitors of the TRAKTO Fair use the converted exhibition track ground near the Gdańsk Stadium Expo stop. It is an area of around 6 thousand sq. m. Four tracks provide an attractive display of rolling stock. As part of the investment, PKP Polskie Linie Kolejowe S.A. prepared slab tracks and passages between displayed rolling stock.
Rail – green and more efficient transport of goods to ports

– Rail investments to Polish seaports, carried out by PKP Polskie Linie Kolejowe S.A., considerably increase the handling capacity of ports and the transport of goods by rail and foster the development of the economy. Projects effectively use the EU funds of CEF Connecting Europe Facility for the development and enhancement of the capacity of rail, being the ecological transport mode – said Andrzej Bittel, State Secretary at the Ministry of Infrastructure.

– We are effectively implementing rail projects which increase the opportunities for travel and the transport of goods. Investment in the access tracks to the port in Gdańsk will not only increase the possibilities for handling goods in the port and the efficiency and safety of rail transport but also improve communication in the city and allow for a better exhibition on the tracks next to the International Gdańsk Fair – said Ireneusz Merchel, CEO of PKP Polskie Linie Kolejowe S.A.

– We are pleased that the PKP Polskie Linie Kolejowe S.A. prepared a railway connection to the Gdańsk port and thus increased transport capacity. It is very important that communication and service to the port were ensured during the works. By expanding access infrastructure from the land, the largest Polish port raises service standards, increases competitiveness and strengthens its position at the Baltic Sea – Łukasz Greinke, president of the Port of Gdańsk Authority S.A.

– It is the first time that rolling stock and rail machines are exhibited in the new exhibition tracks space of Gdańsk Zaspa Towarowa station. Thanks to the investments of PKP Polskie Linie Kolejowe S.A., the quality and comfort of exhibition during the trade fair are considerably improved. This creates even greater opportunities for using the AMBEREXPO space and the Polsat Plus Arena Gdańsk stadium – said Andrzej Bojanowski, President of the International Gdańsk Fair S.A.

At Gdańsk Port Północny, freight trains use 32 new tracks. Space is being prepared for the next group of tracks. More than 50 km of tracks and 165 junctions have been built on the lines to the Port of Gdansk. Embankments and access routes are being built to the new collision-free road overpass at ul. Ku Ujściu. A 100-meter-long overpass between the Gdańsk Kanał Kaszubski – Gdańsk Port Północny stations will improve road and rail safety and transport in the city.

Completion of the project named “Improving railway infrastructure access to the Port of Gdansk” will increase line capacity and allow more goods to be transported. Longer, even 750-meter-long, and heavier train compositions of 22.5 tons axle load will reach the quays. Thanks to the new railway traffic control devices, goods will arrive faster and safer.

The value of the works implemented in Gdańsk by PKP Polskie Linie Kolejowe S.A. is over PLN 1.1 billion net. Almost 40% of that amount is EU funding under the Connecting Europe Facility (CEF). The works are planned to be completed by the end of 2021.