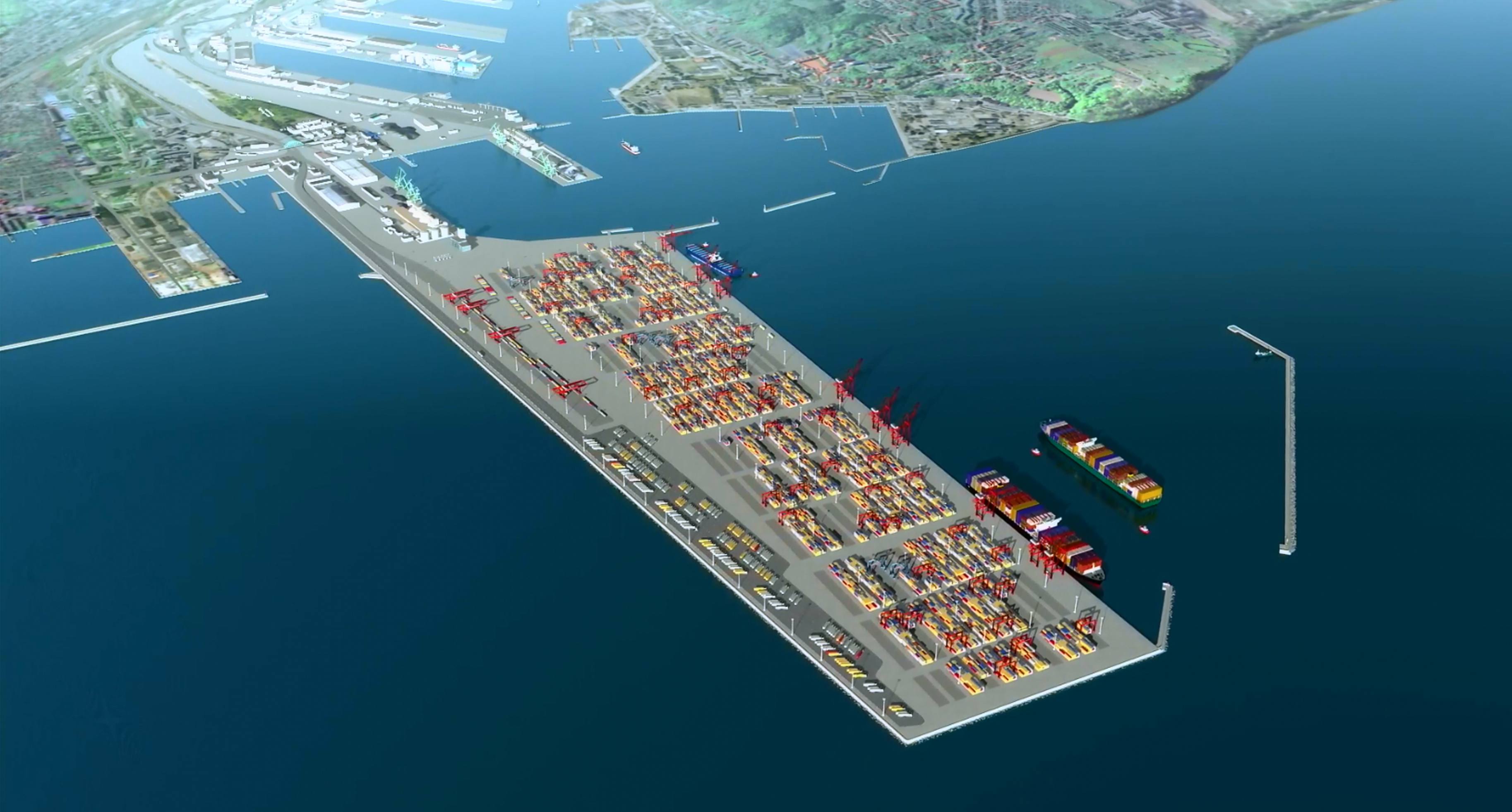 Port projects of the future at your fingertips

The increase in transshipments and long-term forecasts are forcing the boards of the largest Polish ports to seek opportunities for further development. Bold expansion plans move in one direction only - out to sea. Below are three concepts of port development, which not so long ago seemed to be projects of a distant future. Today, they are becoming more and more real and it seems that current port management boards will take every step to implement them.

A gigantic project worth 2-2.5 billion euros is going to be implemented by the Port of Gdansk's Maritime Authority. The Central Port is a new investment to be created between the mouth of the port channel and Naftoport. It concerns the allocation of several hundred hectares of the area of the Gulf of Gdansk to new, universal terminals in connection with the development of the port. It is anticipated that transshipments in the Port of Gdansk may increase to 100 million tons per year, where today they are 40.6 million tons.

- We take the subject of the construction of the Central Port very seriously. At the moment we are working on a detailed concept based on hydro technical solutions, in parallel with the Maritime Office and the Maritime Museum, and we are working on a plan to extract wrecks that lie within the investment area. In addition, we maintain a constant dialogue with potential investors who will want to participate in this project - says Łukasz Greinke, President of the Board of the Maritime Port of Gdansk.

The government support that this project has received is very important. This will certainly facilitate conversations with potential operators and users of the future Central Port. - We want to implement this project as soon as possible. Competition between the North and Baltic Sea ports requires rapid action. We are fighting not only for customers from Poland, but also from the Czech Republic, Slovakia and northern Ukraine. I am convinced that in just five years, one or two terminals should operate within the Central Port - Łukasz Greinke assures.

- A project of such a large scale means that it will be created in stages. We will probably use the formula of a Public-Private Partnership, because the skillful involvement of private funds will help optimize the shape and equipment of individual terminals in the Central Port - the President explains.

- I am convinced that the completely new infrastructure will be adapted to the current market trends, which show the increased importance of ships, and the pressure of ship owners for even faster reloading means that deep-water infrastructure located in open waters is the most attractive in this respect. What's more, the Central Port will create excellent opportunities to develop tomorrow's technologies, such as ships powered solely by electric engines or LNG, or support for autonomous vessels that are intended to navigate waters with no crew on board. That is why the Central Port is a great tool for keeping the Port of Gdansk in the club of the most modern ports in the world - says Łukasz Greinke.

There is a great challenge ahead of the Port of Gdynia. Throughout the years, the intensive development of both the Port and the city of Gdynia has caused a shortage of land for further development of the port. The panacea for this challenge is the concept of building an Outer Port. The key investment project of the Port of Gdynia assumes the creation of a deep-water Outer Port extending above the current protective breakwater on artificial land, based on the existing quays: Śląskie and Szwedzkie. The concept of the construction of the Outer Port was recognized as a project worthy of implementation by Marek Gróbarczyk, Minister of Maritime Economy and Inland Navigation. The project of building a structure going out to sea has gained a great opportunity not only for the dynamic development of the port, but also for maintaining its competitive ability and high position on the market of port services in the Baltic Sea Region.- We received a "green light" from the ministry and preparations for the construction of the Outer Port as part of the Port of Gdynia 2030 program have gained momentum - stresses Adam Meller, President of the Port of Gdynia Authority SA. - The Outer Port - defined universally - will be a typical container terminal, with equipment for handling and storage and access to modern land infrastructure. The new quays will also be able to accept passenger ships - he adds.

As for now, it is a stage of local research in the Port of Gdynia with the support of external consultants. Pre-investment environmental research will be carried out, along with a natural inventory and research on the cleanliness of sea-bed sediments in the area of the future Outer Port. Analyses of wavelets and the impact of the planned investment will be carried out on neighboring bank sections. An initial feasibility study and a multi-variant concept study will be prepared, taking into account the various functions of the planned Outer Port. After conducting the aforementioned tests, the Port of Gdynia Authority SA will make a decision regarding the formula and scope of the construction of the Outer Port.

- We take the subject of building the Outer Port very seriously - emphasizes A. Meller - we are currently working on a detailed concept of hydro technical solutions and we are talking to potential investors who show an interest in the implementation of the project. We are aware of the fact that going into the sea is a historic moment in the life of the port and a chance to raise its competitiveness.

A new turntable, the deepening of the port basins and the approach to 16.5 meters, as well as the construction of the Outer Port is the nearest future of the Port of Gdynia, which, due to the lack of free land, must literally and figuratively go out to sea.

- Annual transshipment records mean that we must do everything possible to ensure further dynamic development of the port in Gdynia - adds A. Meller. - The Outer Port will be our key to success.

The Port of Szczecin and Świnoujście SA Authority, with a view to ensuring further dynamic development of the seaports in Szczecin and Świnoujście, has made efforts to initiate the development of the port infrastructure for a deep-water container terminal in Świnoujście. This initiative is the result of global and regional changes in the maritime and transport industries. The terminal is to be located in a new outer port, which is to be located east of the LNG terminal.

It is planned to build a pier, which should be separated from the sea by a breakwater. The infrastructure and superstructure of the terminal is to enable the handling of 1.5 million TEU per year (handling capacity of about 2.0 million TEU). At the same time, the terminal concept assumes the simultaneous operation of 2 units with a length of up to 400 m and 1 unit with a length of up to 200 m.

Thanks to such parameters, the largest oceanic container carriers with a length of 400 meters and a width of 60 meters will be able to be handled in the terminal.

It is anticipated that around 150 of the largest container ships in the world and around 300 smaller feeder vessels may annually enter the new terminal. The concept also assumes a place for container barges.

According to preliminary estimates of the Ministry of Maritime Economy and Inland Navigation, the construction of the terminal would cost about EUR 500 million.