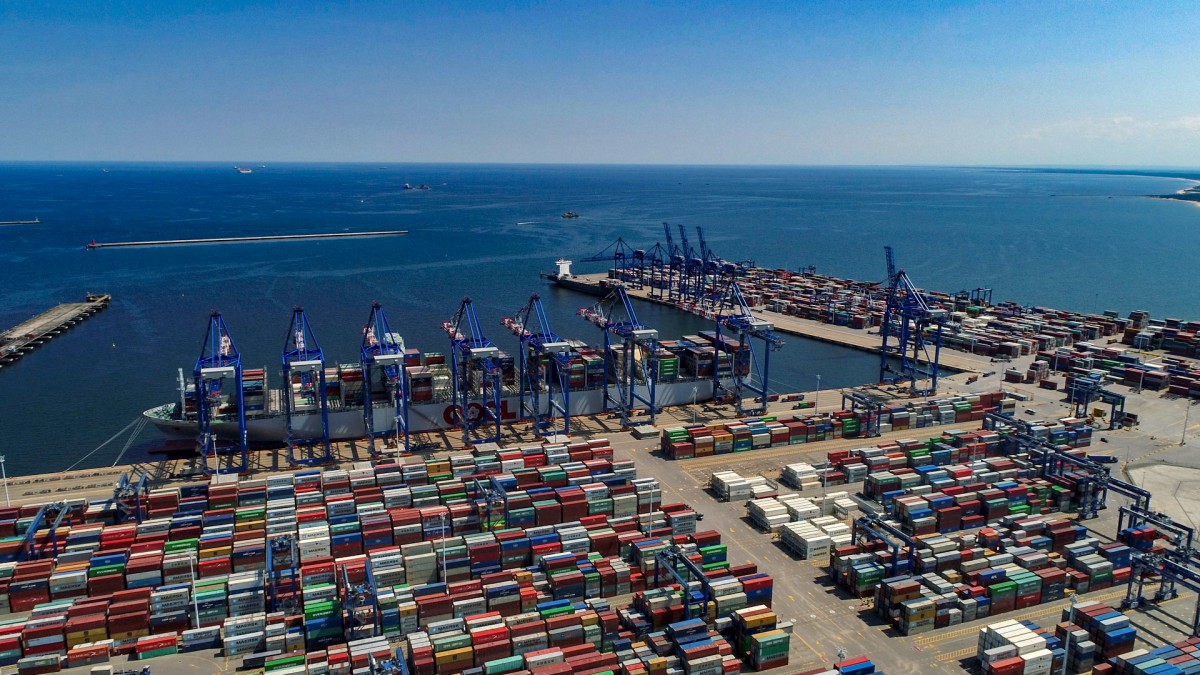 Record-breaking first half of 2019 in the Port of Gdansk. Port transshipped 27.3 million tons of goods

Port of Gdansk set another record. In the first half of 2019, 27.3 million tons of goods were transshipped there. It is 9% more compared to the first six months of 2018.

- It is really optimistic result because in the first half of the year we crossed the magical number of 27 million tons, which means that we can jump over 50 million tons in the whole year - Łukasz Greinke, CEO of Port of Gdansk, said.

The Port of Gdansk is currently the 4th biggest port in the Baltic Sea. It is only 2 mln tons behind third place occupied by Russian Primorsk. In the first half of this year, increases were recorded in virtually all load groups.

- 41% of reload goods we can assign to the containers, but Naftoport also recorded growth in liquid fuels reloading. It helped secure the production of our two refineries and two German ones. At the end of 2019 we want to be 15-20 biggest port in Europe. This will draw the attention of the largest operators in the world, the largest business partners. We achieved very dynamic growth in last decade - we tripled reloading and we are a very interesting place to invest - Adam Kłos, commercial director at the Port of Gdansk, said.

Fuels were the leading cargo group at the Port of Gdansk in the first half of the year - they achieved a growth rate of 21.5% in comparison to the previous year. Naftoport is experiencing increased demand for crude oil transshipment. Kłos informed that during the last "chloride crisis" oil had to be pumped at the level of 100,000 tons per day. Therefore, the port authorities expect another increase. Due to this situation, the expansion of the Northern Quay will not be implemented in its original form, because it would limit the development opportunities of Naftoport. The modernized quay should be shorter in order to allow Naftoport to build another loading station.

The Port of Gdansk has beaten its own record

In the first half of the year, the Port of Gdansk reloaded  4% more goods than was expected. The May and June of this year were also record-breaking - monthly transshipments exceeded over 5 million tons. The third dominant load group is currently coal - in the first half of the year almost 3.5 million tonnes of this resource were handled. A good result was also achieved in general cargo handling: 11.3 million tonnes,  4.2% more than a year ago. Over 10.3 million tonnes of this result can be attributed to containers. The Gdansk port also recorded increases in transshipments in ro-ro cargo (+ 24.3%) and in wood transshipment (+ 41.4%).

- This is a very big achievement in terms of a sharp increase in revenues to the state budget. It also means more jobs, new technologies, bunker - cooperation between the energy industry and ports. At this moment, billions PLN are being invested in railway connections - Dorota Arciszewska-Mielewczyk, chairman of the Polish Commission on Maritime Economy and Inland Navigation, said.

The future plans of the Port of Gdansk assume that the transshipments will increase even more in the following years. And this is due not only to the reconstruction of existing areas, but also thanks to plans for the construction of the Central Port. Work on the implementation of this project will begin this year, and the first new terminals may appear as soon as 2029. After launching this investment, the Port of Gdansk will handle up to 100 million tons of goods a year.

- The growth in Polish seaports clearly shows that one should invest in infrastructure. That is why we prepared special act, which will accelerate the investment in external ports, and this will result in an even greater increase in transshipments - Marek Gróbarczyk, Minister of Maritime Economy and Inland Waterway Transport, said.

The Central Port of Gdansk will be built in the formula of Public-Private Partnership. The project received government support, including from Ministry of Maritime Economy and Inland Navigation, Prime Minister Beata Szydło and Prime Minister Mateusz Morawiecki. The investment is worth 12 billion PLN, taking into account the expenses of maritime administration for the construction of breakwaters, turntables and waterways.

The Port of Gdansk Authority is managing the seaport in Gdańsk, which is a key transport hub in the region. The port infrastructure includes eight quays with a length of over 20 km.