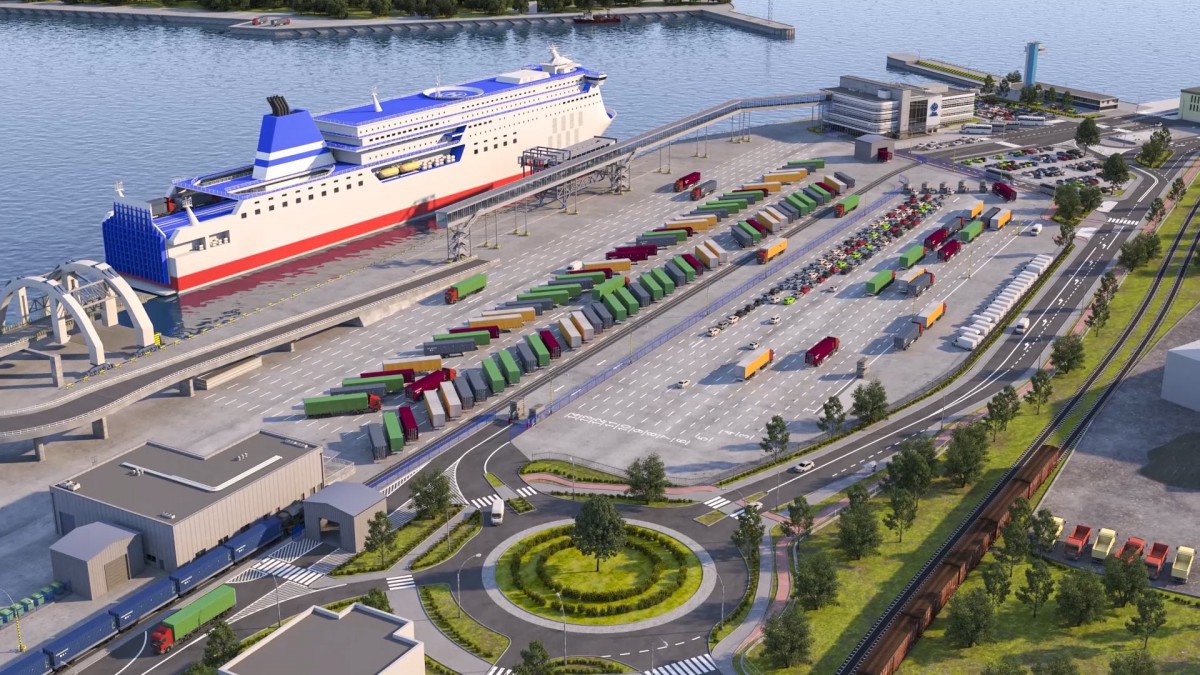 Seaports, Shipping, Logistics
Port of Gdynia begins a new chapter in the history of ferry transport on the Baltic Sea (photo, video)

In the moments when history is being created before our eyes, symbols are particularly important, especially those that directly determine our identity. During the ceremony of laying the foundation stone for the construction of the Public Ferry Terminal at the Port of Gdynia, the Port of Gdynia Sea Authority (PSA) together with invited guests reminded of one of the most famous Polish transatlantic liners - MS Piłsudski.

The concept of the cornerstone in the form of an anchor that is a replica of the one that was on the side of MS Piłsudski reminds that the construction of the Port of Gdynia and the development of maritime trade were among the strategic goals of the reviving Second Polish Republic. The badge of the First Piłsudski Brigade, which was located on the transatlantic bow and immortalized on the cornerstone, also became a symbol. It contained an erection act, today's issue of the daily press, 5 zloty coin issued by the National Bank of Poland on the occasion of the 100th anniversary of Poland regaining independence, and an electronic storage medium with the PORT GDYNIA exhibition - THE POLISH INDEPENDENT INVESTMENT exhibition by the artist, Tadeusz Urbaniak.

One of the highlights of that time was the Sea Station at the French quay, where the flagship ship of the Polish passenger fleet moored - a symbol of modernity, vision and courage. In the area of passenger traffic, the construction of the public ferry terminal in Gdynia is the first such large investment since then, constituting another milestone in the development of the city and the country.

The investment will enable receiving more ferries and will facilitate maneuvering of 240-meter ferries. The time associated with the ship's entering the port will be shortened (the time counted from the beginning of mooring to the departure of the vessel from the port will not exceed 120 minutes).

New terminal location will provide connection with the most important local and national roads that are an important element of the international trade corridor. The location of the terminal also means benefits resulting from shortening the time of navigating in the port. Saving time and improving transport accessibility are significant aspects of the logistics chain, which will ultimately increase the port's competitiveness.

Grzegorz Witkowski, Undersecretary of State at the Ministry of Maritime Economy and Inland Navigation said at the ceremony: "The Port of Gdynia is changing. For several years we have seen radical development of port infrastructure. We are opening a new chapter in the history of ferry transport on the Baltic Sea between the Tri-City and Scandinavia and we hope for more such investments. "

“The port and the city of Gdynia will benefit greatly from the new terminal. A larger number of ferries, and thus passengers, will contribute to the development of local tourism and related industries. The opportunities that our investment creates are directly related to increased revenues for us as a company and for the state budget. We want to continue to develop the idea of the Polish-Scandinavian sea route as part of the TEN-T corridor”, comments Adam Meller - President of PGA SA.

Maciej Krzesiński, director of marketing and foreign cooperation at the Port of Gdynia Authority, admitted that "the public ferry terminal will enable to serve more than one operator. We are already conducting talks with shipowners and see great interest."

The construction of the Public Ferry Terminal is the largest investment in the port of Gdynia in nearly 50 years. Grzegorz Dyrmo, Vice President of the Port of Gdynia, informed that the total cost of building the terminal is about PLN 290 million. The net cost is approx. PLN 235 million, of which approx. PLN 117 million came from EU funding. Over the are of 7 hectares investor will build: a waterfront capable of receiving ferries up to 240 meters long will be built, a terminal building with an area of over 5 thousand. m2, warehouse building with an area of about 900 m2, parking for passengers and terminal employees with over 200 spaces, a maneuvering area of over 6 hectares and a two-level loading ramp.

“Works on the construction of the terminal are proceeding according to the schedule”, says Karol Zduńczyk, President of the Management Board of DORACO. “We have now reached the ceiling level above the ground floor of the terminal building, previously the building was built on piles - for this purpose we used 182 piles with a total length of over 2000 running meters. In the same way, we prepared the foundation for the warehouse building. At the same time, sanitary, electrical and teletechnical networks are being installed. Hydrotechnical works are also underway - including concreting steel pipes.”

The President of the Board of DORACO adds that "at the moment there are over 500 people working on the construction site. We strive to hire subcontractors from our local area, from Gdynia or Gdańsk. They are the best hydrotechnicians and contractors with whom we have been cooperating for years. We will use nearly 2,000 tons of steel, as well as 20,000 m³ of concrete to finish the works”,

Completion of work is scheduled for 2021.