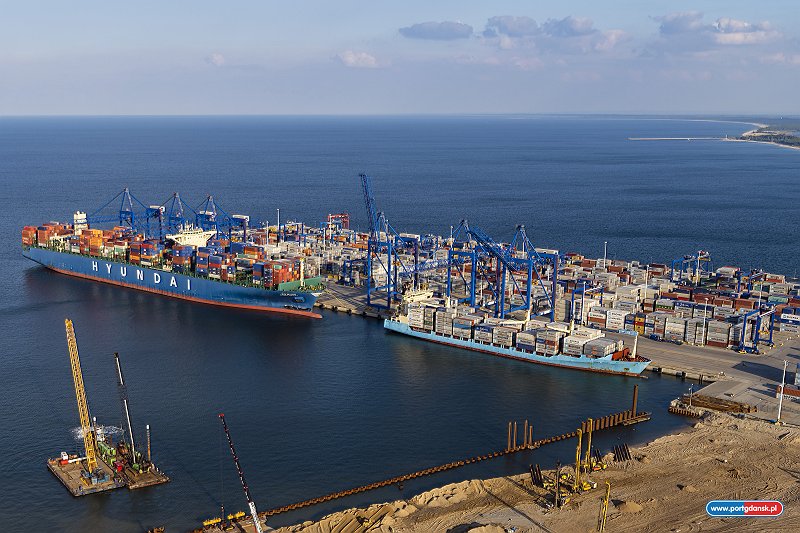 Nearly 36 million tonnes of goods handled, an 11% year on year increase in goods turnover and more than 100% increase in just eight years, a doubling of the size of commercial vessels within a decade and hundreds of millions of zloties invested in just 12 months - in brief, this is the summary of the last year at the Port of Gdansk.

The past year was in the Port of Gdansk was also marked by impressive results in the handling of general cargo, despite the fact that the general cargo market, particularly the container segment, was not among the most successful worldwide. Having summarised the whole of 2015, the Port of Gdansk noted 11.8 million tonnes of general cargo, i.e. 5.2% more than in the record year 2014. At the same time it is worth noting that this is the first time in the Polish maritime economy when the Port of Gdansk slipped into the lead in terms of handling general cargo among the Polish ports, and this is mainly due to the transshipment of containerised cargo. As shown in 2015, the Port of Gdansk successfully held its position in the face of the container crisis, while maintaining a high second place on the Baltic Sea, despite a 10 % decline in the number (TEUs) of containers handled. This decrease was offset, however, effectively by the high tonnage of containerised cargo, which exceeded the level of 2014 by more than 3%.

A 35% growth in the transshipment of coal was noted, which in 2015 amounted to 4.5 million tonnes. Most consisted of coal exports, whose share in the total coal transshipment at Gdansk rose year on year by 8%.

A slightly drop in cargo handling in comparison to 2014 was recorded during the past year only in the group of other bulk cargo (-4.6%) and cereals (-10.7%), with the difference that in 2014 on the quays of the Port of Gdansk cereal transshipment was relatively balanced in terms of export and import, whereas 2015 witnessed a distinct dominance of exports, of which 41% consisted of Polish wheat. It is worth mentioning that despite the decrease in the number of overloaded cereals, the results achieved in this group in 2015 was the third best in the history of the Port of Gdansk.

Particularly noteworthy is the fact that during 2015 there was a 16% increase in the size of commercial vessels, which over the past decade means a doubling in the size of the vessels serviced at the port.

The records goods turnover was also accompanied by significant investment projects, including the quays of the Gdansk port in particular.

Among others, the project stage was completed for the expansion programme worth over 1 billion PLN for the quays along with the deepening of the fairway in the Inner Port of Gdansk and the construction of a new universal quay in the Outer Port. A project worth 18 million PLN was Initiated to strengthen the base at the Coal Pier, whose completion is scheduled for 2016. The large-scale project to modernise the steel piles at the Ore Pier was continued. In addition, at the end of 2015, the PGA S.A. signed agreements to deepen the manoeuvring area between Ore Pier and the Container Terminal, which is a project worth approx. 30 million PLN to be completed in 2016. A vast and technologically complex investment to improve the quality and reliability of the power supply and telecommunications at the Port of Gdansk was completed, resulting in an increased network capacity of 30 MW at the port.

In the past year work began on another important investment for the future port worth over 100 million PLN, i.e. the expansion of the road and rail infrastructure in the Outer Port, in order to improve the functioning of the integrated transport system designed to support intermodal transport and boost the accessibility of the TEN-T core network in terms of Baltic-Adriatic relations. In the fourth quarter of last year the task of obtaining the appropriate environmental decisions for the project was completed and an invitation to tender for the contractor of construction documentation was issued.

However, this is not the end of the long, over 100 item-long list of investment projects carried out by the Port of Gdansk Authority S.A. over the past year. In just 12 months, the PGA invested almost 100 million PLN, i.e. 3 times more than a year ago. When the numerous investments made by transshipment operators and other companies operating at the port are added, the total capital invested in the port would amount to well over 1 billion PLN.

The end of the year also brought some great news concerning the decision made in December by the Pomeranian Voivodeship approving the content of the agreement between the PGA S.A. and the President of Gdansk in the proceedings to determine compensation for the Port of Gdansk Authority S.A. for the real estate expropriated under the implementation of urban road investments. Finally in the course of the settlement agreement the PGA S.A. was awarded substitute real estate with an area of over 12 hectares located on the hinterland of the Przemyslowe Quay, near the tunnel built under the Dead Vistula.

To sum up, undoubtedly all these projects will bear fruit in strengthening the role of the Port of Gdansk further not only in the Baltic, but also in the European arena. It can be expected that the rewards will be reaped in the form of further transshipment records and that the years to come, like 2015, will go down in history as a Port of Gdansk success story.