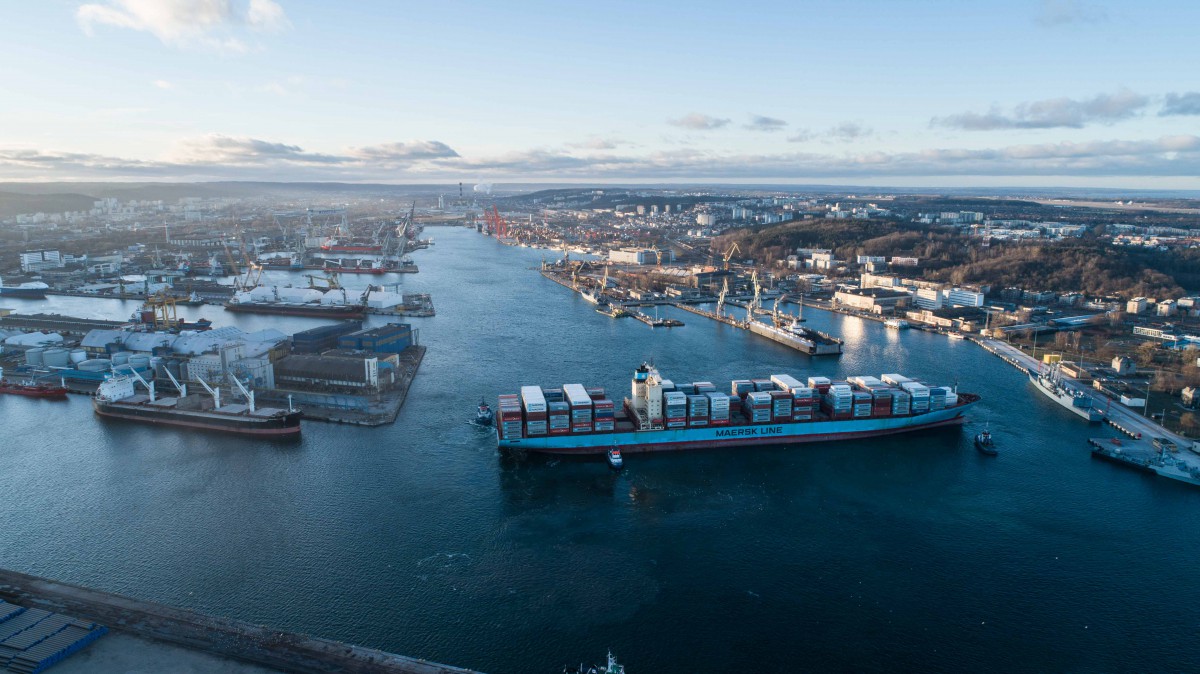 Record investments, including a new turntable, deepening of the harbor basins and reconstruction of the quays are key elements of the development of the port of Gdynia. These are investments of structural importance for Poland and trans-European transport networks.

The main purpose of deepening the approach runway and internal water basins of the Port of Gdynia is to enable the hovering of larger vessels, with a maximum length of up to 400 meters, width up to 58 m and maximum draft up to -15 m (current maximum draft is -13 m) and to improve navigation conditions and safety hydrotechnical constructions.

Works on the implementation of the first stages of the investment has been carring out since September 2017. The first element was the reconstruction of Turntable No. 2 along with the reconstruction of Pier No. III and dredging works. As part of the work, the Navy Shipyard will be moved to a new position.

The main task was to create turntable no. 2  with increased parameters - the diameter increase from 400 metres to 480 metres.

To increase the navigational safety of ships and maintain the right width of the Canal, it is necessary to widen the Pilot Entrance to achieve a bottom width up to 140 metres and rebuild the Northern Spur in the Port of War and the Port Quay with a wave saver. At the same time, the Maritime Office in Gdynia will carry out works on the approach track to the port.

Adam Meller, president of the Port of Gdynia Authority S.A. informs that we are expierienced a new opening of the Gdynia port: "For me, this new opening means lifting the restrictions that Port Gdynia has today both in terms of length as well as the width and draft of the vessels served. With this project, these restrictions we actually endure, it is extremely unusual for us important because I think it will bring us many customers, that we haven't been able to serve so far."

Meller emphasizes that this project will be implemented thanks EU funds: "We are pleased that UE funds gave us opportunity to change infrastructure of the port in order to mantain competitiveness of the port service market. This investments will allow containerships to get to the port directly from Far East and other continents.

The total cost of the project "Dredging the approach fairway and internal reservoirs of the Port of Gdynia", as well as the reconstruction of the quays is estimated at PLN 556 940 377.83 gross, while co-financing from the European Union is PLN 273 000 000.

The construction of the Public Ferry Terminal is the largest investment in the Port of Gdynia for nearly 50 years. The total cost of terminal construction is about 290 million PLN gross. The net cost is approx for 235 million PLN, of which 117 million zlotys are provided from EU Funds. On an area of ​​over 7 hectares, a waterfront will be built capable of accepting ferries up to 240 meters long, terminal building with an area of ​​over 5 thousand. sq m, warehouse building with an area of ​​about 900 sq m, parking for passengers, terminal employees for over 200 spaces, a maneuvering area of ​​over 6 hectares and a two-level loading ramp.

During the ceremony of laying the foundation stone for the construction of the Public Ferry Terminal in the Port of Gdynia, the Port of Gdynia Sea Authority together with invited guests reminded one of the most famous Polish transatlantic liners MS Piłsudski.

The concept of the cornerstone in the form of an anchor similar to the one on the MS Piłsudski reminds that the construction of the Port of Gdynia and the development of maritime trade were among the strategic goals of the reviving Second Polish Republic. The badge of the First Piłsudski Brigade, which was located on the bow of the transatlantic liner and immortalized on the cornerstone, also became a symbol.

Construction of the External Port in the PPP formula

In 2019, the Port of Gdynia Authority together with the Ministry of Investment and Development selected a transaction advisor who will provide consulting services to the Company in design areas, taking into account primarily economic, financial, legal and technical issues.

The PPP formula allows to use capital, knowledge and experience of the private sector in financing public investments. According to "policy regarding the development of public-private partership"" adopted by the Council of Ministers, the Port of Gdynia Authority intends to implement a strategic investment from the point of view of further development increasing the port's reloading potential and competitive position in the Baltic Sea Region. Cooperation with an experienced advisor guarantees the selection of the best private partner to implement this undertaking.

On an artificial land, based on the existing Silesian and Swedish quays will be built a deep-water External Port, going beyond the current protective breakwater, increasing the port area by 151 ha and transshipment capacity by 2.5 million TEU. Thanks to the construction of the External Port, over 700 new jobs will be created. It is estimated that the revenue for the city of Gdynia will amount to 22 million PLN.

Key investments improving rail access to the Port of Gdynia

In 2019, Port of Gdynia Authority SA and the Center for EU Transport Projects have signed an agreement for EU funding for the project "Expanding rail access to the western part of the Port of Gdynia - reconstruction and electrification". The planned total investment costs will be eastimated about 70 million PLN. As a result of the signed contract, this investment received EU support in the amount of approximately PLN 20 million. By electrifying rail access, the investment will improve the functioning of the inland transport of the Intermodal Container Terminal.

There has also stared the PKP PLK investment project "Improving rails access to the seaport of Gdynia", under which 115 kilometres of tracks will be rebuilt and electrificiation of access to the port gates. The reconstruction will salo cover 13 kilometres of roads, a railway bridge and two rail-road crossings. Communication will facilitate construction of two railway viaducts

Works last at the Gdynia-Port station too, where old tracks, swithes and overhead contact line are dismantled and earthworks are carried out. For the needs of the investment, over 120000 foundations and over 210 thousand tons of crushed stone.

Bringing out to use a new house storage warehouse

Considering the constantly growing market requirements, especially in the area of ​​logistics and storage facilities, the Port of Gdynia Authority has successfully completed the construction of a modern high-storage warehouse in 2019.

The magazine is the first of four of this type and will be one of the key elements of the Intermodal Logistics Center. In addition to warehouses, an area of ​​30,000 m2 will also include storage yards and necessary road and rail infrastructure. Investments in this area of ​​the Port are directly part of the Gdynia 2027 Port Strategy. Our goal is to create favorable conditions for the development of the Trans-European Transport Network (TEN-T).

The warehouse with a usable height of 10.5 m is intended for storing highly processed general cargo in packaging. Logistics services will be related to storage, acceptance, storage, completing and packaging as well as issuing stocks in the cross-docking system. Divided inside into four storage chambers with an area of ​​2500 - 4000 sq m, each chamber will be adapted to the dimensions of pallet frame racks with ensuring the width of the working corridor for transport devices - lift trucks with retractable masts. The roof structure of the building is adapted for photovoltaic installation on the entire roof surface.

A record 500 000 TEU in Baltic Container Terminal in Gdynia

In December 2019 Baltic Container Terminal sp. z.o.o in Gdynia, for the first time in its history exceeded the level of 500,000 TEU of annual transhipments. This record was achieved thanks to excellent cooperation with shipping companies and shippers who have been using services of Baltic Container Terminal for years. The port of Gdynia is getting better and better transshipment results every year. This year, it is expected to exceed 24 million tons, including 900,000 TEU.