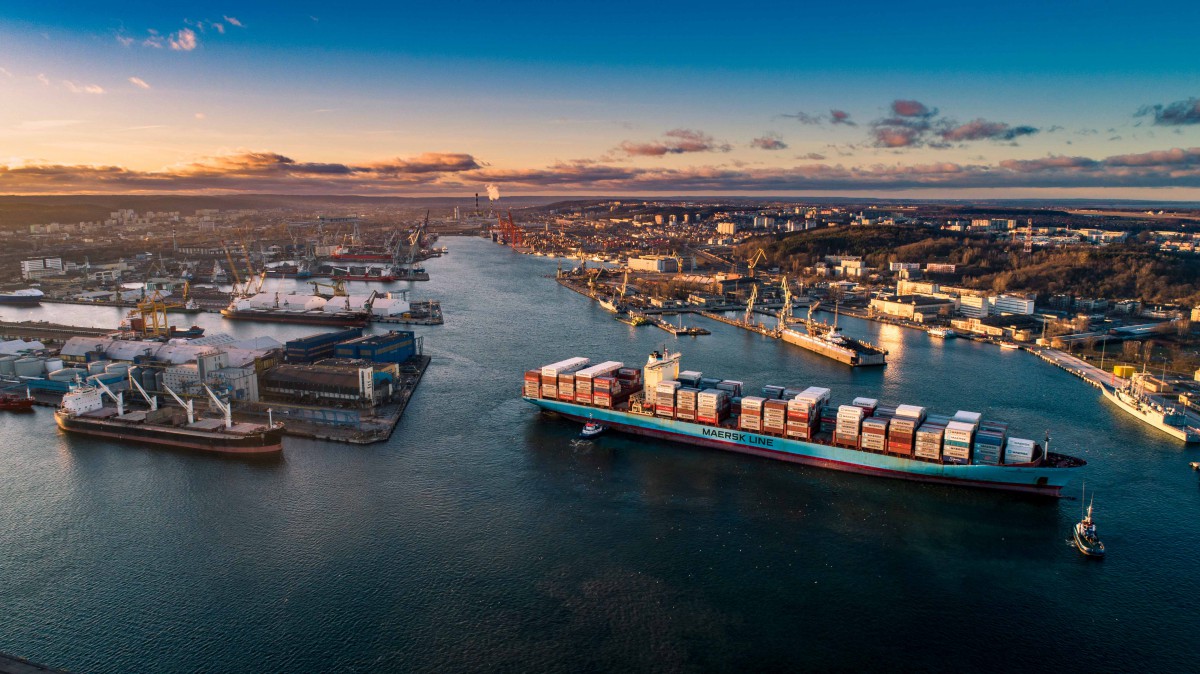 23,492 million tonnes of handled cargo – with that historic record Port Gdynia have closed previous year. This means a 10% increase compared to 2017. And that's not the end. The Port of Gdynia Authority (PGA) announced major investments in the coming years, thanks to which the results of the Gdynia port will be even better in the future. This includes construction of a public ferry terminal and deepening of the port basin.

- We managed to achieve another transshipment record, we managed to earn good amount of money, so I consider previous year at the port of Gdynia very successful. We handled a lot of bulk goods, while we achieved record at wood transshipment- an increase of over 400% compared to previous years. I am also happy with the container handling - says Adam Meller, president of The Port of Gdynia Authority

General cargo was the main cargo group handled at the Port of Gdynia, it was responsible for a 59% share in the total turnover structure. Last year, in this cargo group, 1.36 million tons of goods were transshipped, which is mainly related to the number of containers handled. The increase was also recorded in the transshipment of general cargo handled by ro-ro vessels.

The second place in transshipment belong to grain – 2,944 million tonnes, the third place belonged to coal and coke. The increase in transshipments in this group is related to significantly better coal imports. The share of this cargo group in the port turnover structure in 2018 was about 11%. The transshipment of other bulk cargoes has also increased by over 20%. The aforementioned coal has reached the result of 979 thousand tonnes. In other cargo groups, there were slight decreases in cargo handling compared to 2017.

Marek Gróbarczyk, Polish Minister of Maritime Economy and Inland Waterway Transport, who was present at the conference, positively assesses the current situation of Polish ports. Last year, as a result of their operations, 40.6 billion zlotys went to the state budget.

- Looking historically at what has been going on in recent years, we can see that Klaipeda is not a competitor for us, but ports of Western Europe. Therefore, I think that we can achieve a certain synergy here, through the development of Via Carpatia, rather than competitiveness in the collection of loads. We hope that this investments will double the transshipments in our ports and we will achieve 200 million tons of cargo handling in coming years - says Marek Gróbarczyk, Minister of Maritime Economy and Inland Waterway Transport.

Among the key investments at the Port of Gdynia, there is construction of a public ferry terminal, the Outer Port and the Logistic Valley. Adam Meller also stressed that there are very good chances for the construction of the Red Road. This investment is necessary for the development of the Port of Gdynia and it will have a length of about 7 km. The design of its construction is divided into two stages. The first covers about 3.5 km from the Gdynia Północ junction in the area of Pucka Street to the Baltic Container Terminal. The second one is to be an extension of this section for another 3.5 km to the Karlskrona roundabout in the vicinity of which a new ferry terminal is planned. The Red Road will be connected to the two-lane Via Maris road, which will start at the end of the Gdynia-Chylonia beltway and run to the border with Rumia.

Meller added, that the Port of Gdynia will also enter ship bunkering market. First bunkering, in cooperation with PGNiG, will be performed next month. Ultimately, LNG terminal with a gas power plant will be built at the end of the Outer Port. The project also includes construction of a barge designed for bunkering LNG to other vessels.

Port of Gdynia also achieved very good financial results. Profit from the basis of operations increased in 2018 compared to the year of creation by  2.6 million PLN (7.8%), thanks to growing basic obligations on port fees (12.5%) and, to a lesser extent, from the increase in rental sources (1.7%). Due to the current situation on the global financial market and investment expenditures,
result of financial activity ped to 28%. The decrease was also similar to other operating activities (down 19%). As a result, the Port Gdynia net profit for 2018 was 10.8% lower than year before and it  amounted to 67 mln PLN.

Meanwhile EBITDA increased in 2018 by 1.5% compared to the previous year and amounted to 106.1 million PLN. Together with EU funds, this money provides financing for an ambitious port modernization and development program.

- We plan to spend 1,2 billions PLN within three years, assuming that we will receive half of this amount from EU funds. Companies operating at our premises generate 6-7 billions PLN from customs and tax - says Piotr Nowak, vice-president of the Port Gdynia.

The total value of investment expenditures in 2018 achieved 183 million PLN. Thanks to that funds port carried out part of the modernization of the maneuver area at  the turntable no. 2. In addition port purchased some land, including land belonging to Nauta Nautical Shipyard Yard, allowing for further investment and development works at the Port of Gdynia.

The value of contracts signed last year reached 256 million PLN. It mainly concerns a key investment - deepening the port area -  which will be completed by the end of 2021. This will allow Gdynia in the near future to enter the group of deepwater ports, and thus significantly improve the competitiveness of the port through the possibility of accepting ships with greater draft. The contracts signed for the modernization of two wharf are important part of this investment. The Port of Gdynia Authority also took care of the implementation of projects at the port's back, where a modern high-bay warehouse is being built.

A modern ferry terminal in Gdynia in two years

During the result conference on Thursday, a contract for the construction of a Public Ferry Terminal in the Port of Gdynia was signed.

- This is a project that will allow us to moor larger vessels, up to 240 m. The terminal will also be adapted for the inter-modal transport: railway, road and public transport - says Grzegorz Dyrmo,  vice-president for infrastructure in PGA.

The contractor for the new terminal will be the DORACO Construction Corporation.

- It is a very good challenge, because it consists of three parts. The cubature, the terminal - it is designed as referring to Gdynia modernism, the second part is the road system, which is also crucial for this project and the third one that we like the most, engineering and hydro-technical part. The end of works is planned for the fourth quarter of 2021 - says Karol Zduńczyk, president of the DORACO Building Corporation.

The modern ferry terminal will be built in the central point of the Eastern Port, at the intersection of the main arteries: Polska and Chrzanowskiego Streets, joining the Karlskrona Roundabout. As a part of the project  access roads to the new terminal will be built, along with railway tracks, turnouts and two quays, to ensure their durability in connection with the planned access of larger vessels to the Gdynia port. Parking lots, platforms for public transport, parking spaces for taxis, minibuses and public transport buses as well as for private cars will be built in front of the terminal building.

The location of the terminal will allow easier maneuvering of ferries and shorten their time of their stay in the port and will significantly help ferries get access to the center of Gdynia.

The new ferry terminal is being built primarily to achieve possibility of servicing much larger passenger ferries entering the market, up to approx. 245 m long - the current terminal handles ferries up to approx. 175 m long. The estimated cost of the investment is approx. 180 million PLN, of which 116 million PLN will be financed from the European Union.