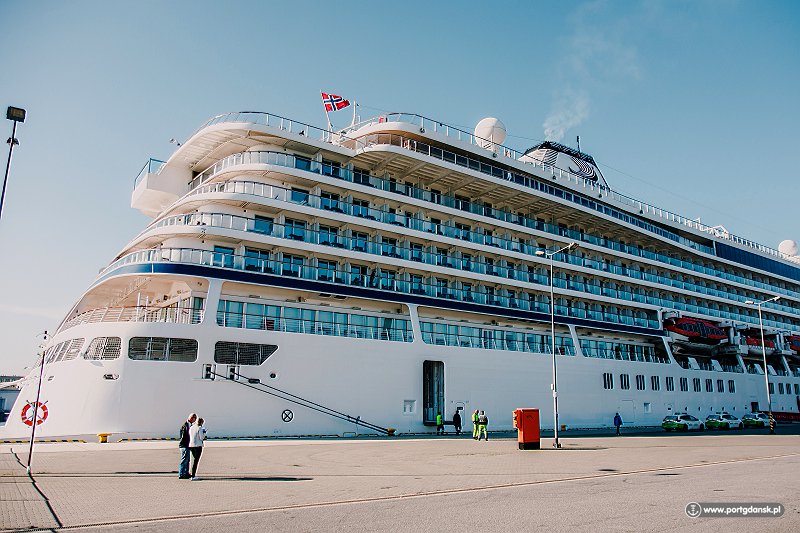 Seaports, Shipping, Logistics
A record number of passenger ships and more than 31,000 tourists at the Port of Gdansk

This season, the Port of Gdansk Authority broke its record for the number of passenger ships to call at the port. From the beginning of the year to 16 September, 63 cruise ships called at the Port of Gdansk. The last vessel of this type in the 2017 tourist season was the nearly 230-metre long Norwegian Viking Star.

The Port of Gdansk summed up this year's cruise season and broke yet another record. In 2017, a total of 63 passenger ships called at the Westerplatte and WOC II (Duty Free Zone) terminals. The last, 64th call is scheduled for 29 December 2017, but this falls outside of the tourist season. This is a record for the number of cruise ship calls at the port. In previous years, an average of 30 vessels have called at the port. The Port of Gdansk's passenger terminals are enjoying growing popularity among tourists from Germany, the UK, the USA, Italy, France and Spain, among others.

Enlarge"This year, more than twice as many cruise ships as in previous years called at the Port of Gdansk. In the 2018 season, we are expecting yet another record. We will support this trend - we are planning to develop the port's infrastructure with tourist services in mind. In our plans, as part of the construction of the Central Port, we would like to locate a terminal enabling border clearance and reception of ships even larger than at present. We want to make use of the region's appeal and Gdansk airport in order to make the Port of Gdansk even more attractive. The investment will surely open up new business opportunities for entities operating within the Port premises. After all, these "floating towns" will have to be supplied with various goods and fuel. A professional terminal also makes it possible to carry out crew and passenger exchanges, and minor service work on the vessels, and the proximity of the shipyard lets shipowners think about comprehensive repairs. We are planning to begin the implementation of the project in 2020," says Lukasz Greinke, President of the Board at the Port of Gdansk Authority SA. "The investment will not only make Gdansk's offering more attractive to foreign tourists, but also benefit the local community. Roads and railways, which constitute the necessary access infrastructure, will be modernised. The Port's expansion towards the east will undoubtedly influence the Stogi district, as accommodation and catering facilities will develop there," adds Lukasz Greinke.

In 2017, the Port of Gdansk recorded over PLN 1 million revenue from cruise ship handling. Sea tourist traffic also constitutes an increasingly important source of the Tri-City's revenues. In 2017, more than 31,000 tourists came to Gdansk on board 63 vessels. Average expenditure per passenger amounts to about EUR 80 per person*, which is spent on sightseeing, transport, souvenirs and other purchases. It is worth noting here that according to the data of the Gdansk Tourist Organisation, a total of more than 236,000 foreign tourists visited Gdansk between June and August. Over the same period, ships carrying a total of over 22,000 passengers called at the Port of Gdansk. A comparison of these figures highlights the important role that the Port plays in handling foreign tourist traffic in Gdansk.

Viking Star, which landed at the Obroncow Westerplatte Quay on 16 September, is owned by a Norwegian company called Viking Ocean Cruises, is 228.3 m long, and is one of the largest passenger ships calling at the Port of Gdansk. Cruise ships usually stay at the Port for several, to several dozen hours. During this time, passengers typically explore Gdansk and attractions in its vicinity, including Malbork Castle, the European Solidarity Centre, the Stutthof Museum and the Museum of the Second World War.