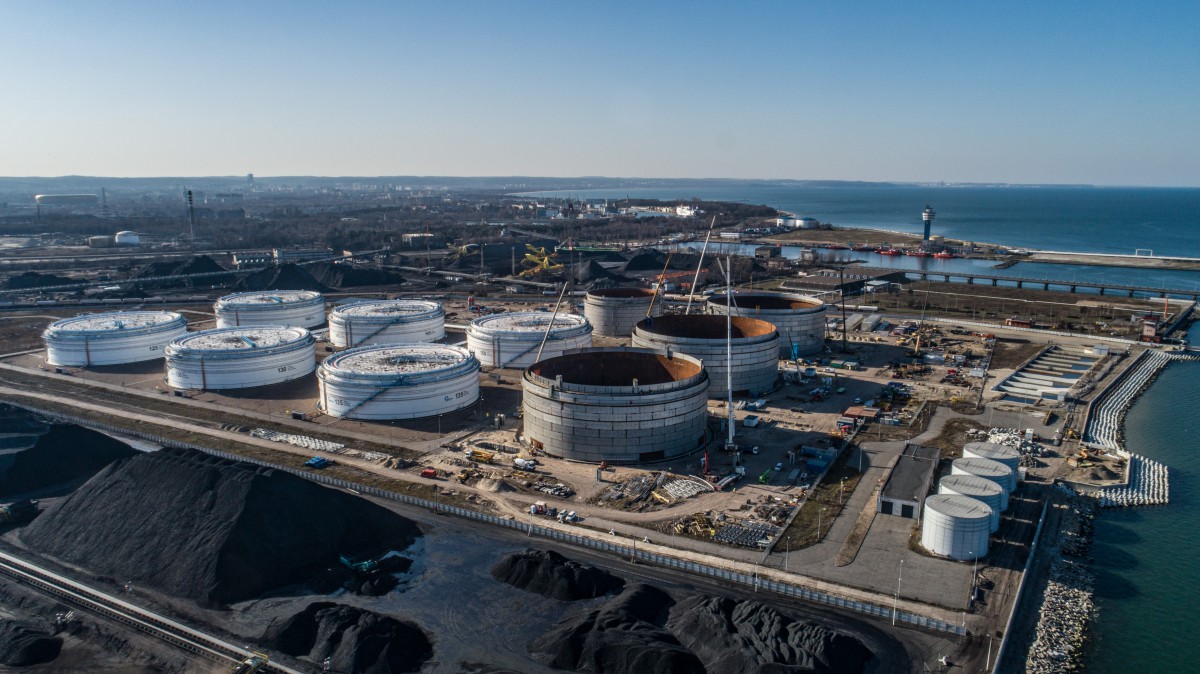 Seaports, Shipping, Logistics
Another investment at the Port of Gdansk is entering the main phase of implementation - leak testing of PERN Oil Terminal tanks [photo, video]

Expansion of Oil Terminal at the Port of Gdańsk, a project owned by PERN Megainvestement, is reaching the final stage. Works on steel structure of three tanks are being finalized: 170, 175, 180, each with a capacity of 100,000 m³. The hydrostatic test of the first tank No. 190 with a capacity of 45,000 m³ has also been completed.

The hydrostatic test of the tang is carried out as a part of obligatory technical tests. It includes checking the strenght, tightness and deformation of the steel structure and settlement of the tank foundation under full load.

During the test, the shell and the cover are filled simultaneously, which allows even loading of foundations, whose settlement is measured and analised during the entire test.The quability of the settlement is particulary important for a tank with a floating roof, because it prevents tank shell deformations, that could cause wedging of the floating roof.

A tank with 45 000 m3 capacity, with an inner shell with diameter of 50m and height of 24,6 m is currently being tested hydrostaticly. Its outer shell has a diameter of 54 m and a height of 21 m.

Due to the very difficult soil conditions, the foundation of the TNG tank is composed of direct and indirect foundations.

Stage II of the expansion of the Oil Terminal, belonging to the PERN Megainvestments program, involves the creation of five tanks for oil storage: three with a capacity of 100,000. m³ each and two with a capacity of 45 thousand m³. Thanks to this, the storage capacity will be increased, as well as the possibility of separating various types of crude oil supplied by sea to Naftoport.

Tanks No. 170, 175, 180 and 190 will be commissioned in October this year. Tank No. 185 with a capacity of 45 thousand. m³, due to the need to remove an obstacle encountered at a depth of 4 to 10 meters, which is a remnant of the granite strengthening of the coast, will be included in the existing infrastructure in August 2021.

The Port of Gdansk in 2019 for the first time in history crossed the barrier of 50 million tons and transhipped over 52 million tons of cargo. 2019 was also record-breaking in oil transhipments. A total of 16.8 million tonnes of raw material and liquid fuels were transhipped in Naftoport.

The expansion of the PERN Oil Terminal is one of the numerous investments currently carried out at the Port of Gdansk area. At the back of the Northern Port, the Port of Gdansk Authority is implementing a number of investments in rail and road infrastructure. In the next three years, the PGA is going to spend nearly PLN 1.3 billion on investments. In 2019, it allocated nearly PLN 390 million, of which PLN 51 million came from the European Union budget.