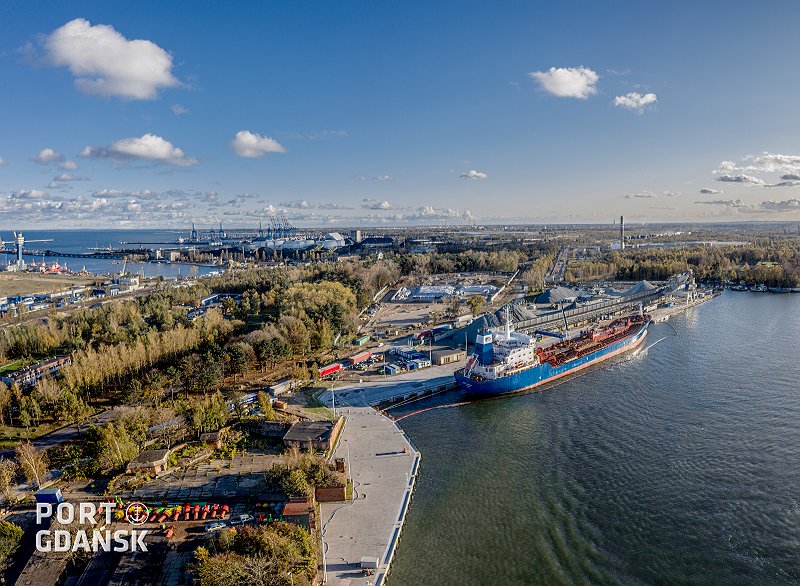 Seaports, Shipping, Logistics
Another stage of quay modernisation at the Port of Gdansk completed

Two renovated quays were commissioned at the Port of Gdansk as part of the port's ongoing quay and fairway modernisation project. On 15 November, Vice-President of the Board and Director of Infrastructure at the Port of Gdansk Marcin Osowski ceremonially announced the completion of one of the stages of work where the revitalised Mew Quay and Obroncow Poczty Polskiej Quay meet and officially commissioned both quays.

Completion of the 1st stage of expansion of the Obroncow Poczty Polskiej Quay consisted in the redevelopment of half of the quay's length. The remaining part of the quay is still under renovation, which will result in its extension from 345 to 391 metres. The technical depth at the quay was considerably increased to 11.2 metres, making it possible to handle ships with larger draught. Currently, the quay is used primarily to handle the transshipments of aggregates, fuel and base oils, and sulphur. Two vessels can be handled at the OPP Quay at the same time.

The Mew Quay was also redeveloped, as its previous condition made it impossible for ships to berth here. Now, after the completion of work and structural modifications, the quay gained a parking function. Small vessels with draught up to 5.3 metres may now berth here.

Enlarge"The completion of Stage I consisted in the execution of construction work along a total of 286 metres, including 174 metres of the Obroncow Poczty Polskiej Quay and 112 metres of the Mew Quay. Timely completion of the work is the result of the successful cooperation between the General Contractor, Contract Engineer, and the Ordering Party. It also makes it possible for the operator to use the quay without interruptions and for us to move to Stage II of the work," says Marcin Osowski, Vice-President of the Board and Director of Infrastructure.

The value of the investment completed at Stage I amounted to more than PLN 26 million. Stage II, the cost of which will come to PLN 16 million, involves complete renovation of the Obroncow Poczty Polskiej Quay. The expected final completion date within this section is the end of 2020.

EnlargeThe general contractor performing all of the construction work is the DORACO company, with which the Port of Gdansk Authority signed the contract in 2017. The value of the investment exceeds PLN 40 million. Stage I involved the performance of construction work including hydrotechnical construction, road surfaces, a stormwater drainage system, a water supply and distribution network, an electricity network, lighting, conversion of crane girders, and dredging work with bottom reinforcement. The work schedule was adjusted to the frequency of transshipments within the terminal area, so as not to cause any downtimes in the operation of other companies.

"The modernisation of the OPP and Mew Quays was one of the more demanding hydrotechnical projects completed by DORACO," says Radoslaw Preiss, Board Member at DORACO. "The location of the historic Szaniec Mewi fortifications by the Mew Quay required additional tests and constant geodetic monitoring, as well as the use of a special piling technology in order to prevent soil destabilisation and destruction of the facility.

The investment was completed as one of the tasks within the framework of the "Modernisation of the fairway, quay expansion, and improvement of the conditions of navigation at the Inner Port in Gdansk" project, which involves investments totalling EUR 110 million. The project includes redevelopment and modernisation work over the total length of 5 km, which will result in the improvement of navigation conditions at the Port of Gdansk.