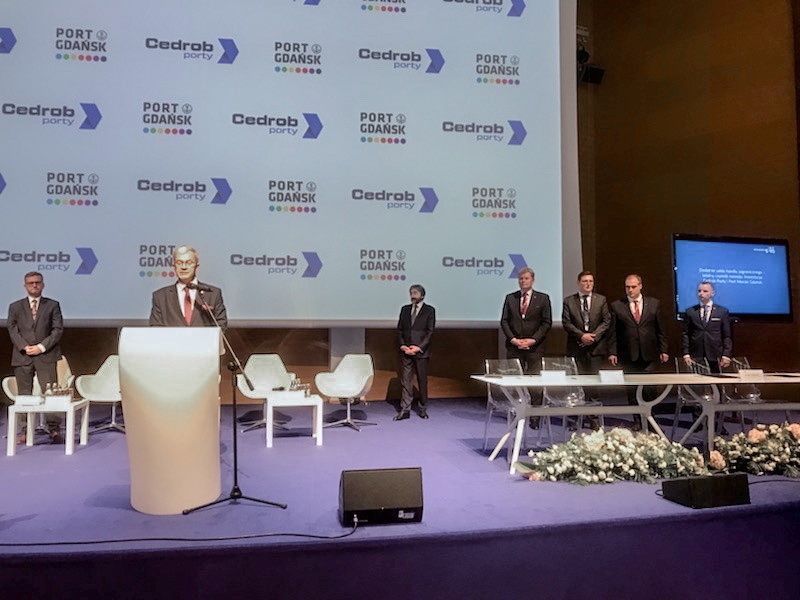 Seaports, Shipping, Logistics
Cedrob Group will invest 100 million in a cold store at the Port of Gdansk

The main event of the first day of Congress 590 in Jasionka near Rzeszow was Cedrob Porty Sp. z o.o. and the Port of Gdansk Authority SA signing the preliminary agreement for the construction of a high-storage cold store. It is a strategic investment for which Cedrob Group, the Polish leader of the meat sector, will allot PLN 100 million.

EnlargeThe boards of Cedrob Porty Sp. z o.o. and the Port of Gdansk Authority SA signed the preliminary agreement earlier today. Minister of Investment and Economic Development Jerzy Kwiecinski and Grzegorz Witkowski, Undersecretary of State at the Ministry of Maritime Economy and Inland Navigation were present at the ceremony.

The Cedrob Porty company will build the cold store within the premises of the Port of Gdansk Authority SA. The facility with a capacity of about 30,000 pallets will be located near DCT Gdansk SA, which is the largest container terminal in the Baltic Sea and the primary transshipment hub for Central and Eastern Europe and Scandinavia in Euro-Asian relations. The budget for the project will amount to a minimum of PLN 100 million. Completion of the investment is planned for the second half of 2021.

The state-of-the-art, fully automated cold store will hold meat intended for export. The latest technological solutions will make it possible to make optimal use of the available space, increase efficiency, and ensure high competitiveness. All of the operations in the cold store will be carried out 24 hours a day, 7 days a week, enabling loading and unloading of a large number of containers. The construction of the company's own cold store at the Port of Gdansk will streamline the transport of meat to Cedrob Group's foreign business partners and enable an even larger increase in production. But the investment is important to the entire food sector - ultimately, Cedrob Porty's cold store will also serve external producers.

Export and investments are the two main pillars of Cedrob Group's development plan. The Polish meat tycoon is increasing its sales abroad each year. Today, Cedrob Group's products are available in more than 60 markets and the total income from export amounted to more than PLN 1 billion in 2018. Rapid development and record sales results were possible thanks to a well-thought-out investment strategy. Last year alone, the value of capital expenditures came to PLN 310 million, and within the last six years - as much as PLN 884 million.

The Port of Gdansk is an important international communication hub. Gdansk's DCT terminal handles the largest container ships and is among the world's top three terminals in terms of the number of containers transshipped during a call of a transoceanic vessel at the port. The Port of Gdansk improves its transshipment record each year: in the first half of 2019, more than 27 million tonnes of goods were handled here, which is a 9% increase compared to the same period of 2018.

Cedrob Group is Poland's largest producer of meat, a leader in the production of poultry and pigs, and a recognised producer of cold cuts. It has 28 years of experience in the sector, which is a guarantee of high quality of production. Thanks to the consistently implemented sustainable development strategy, today, the company is a global food supplier. It exports its product to more than 60 markets across the world.