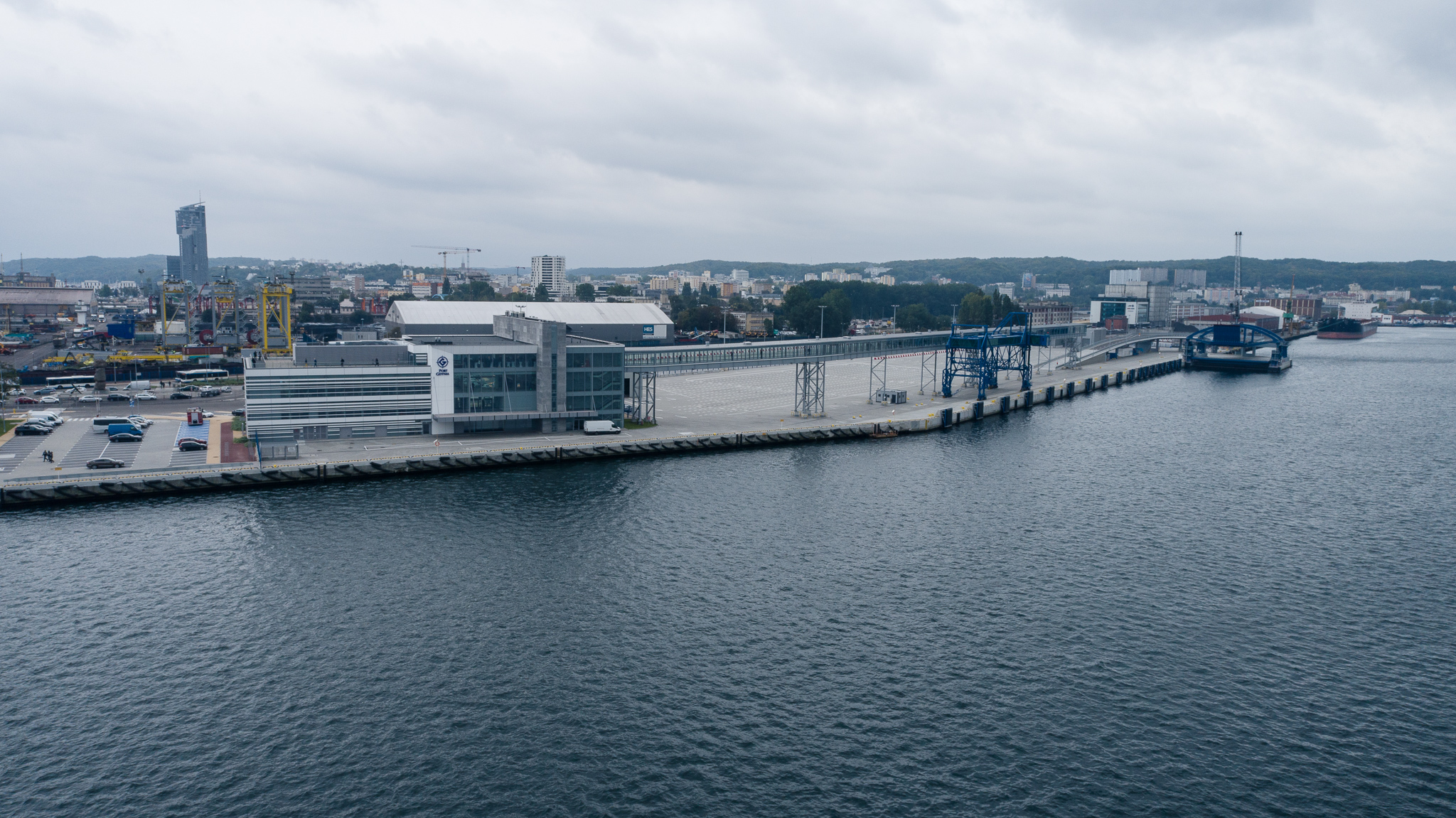 Seaports, Shipping, Logistics
Completion of the construction of the Public Ferry Terminal in the Port of Gdynia [VIDEO, PHOTOS]


On September 23, 1922, Sejm (lower house of Polish parliament) adopted an act authorizing the government to build a seaport "at Gdynia in Pomerania, as a public utility port". 99 years later, an important ceremony related to the development of this port took place at the Port of Gdynia – the official completion of the construction of the new Public Ferry Terminal at 4 Polska Street.


The ceremony was attended by representatives of the central authorities, local government, institutions related to the Port of Gdynia and the granddaughter of the port builder, engineer Tadeusz Wenda, Hanna Wenda-Uszyńska.


The ribbon was cut jointly by Jacek Sadaj, Chairman of the Board of the Port of Gdynia Authority, Marcin Horała, Deputy Minister of Infrastructure, Undersecretary of State in the Ministry of Infrastructure Grzegorz Witkowski and Karol Zduńczyk, President of the Management Board of Korporacja Budowlana Doraco.


– This ferry terminal is a response to customer demand. And the customers, shipowners, whom we always warmly welcome and think about, deserve this type of building – said Grzegorz Witkowski. – We are satisfied with each completed investment, which increases the potential of the port in Gdynia. The ferry market, which is constantly growing in the Baltic Sea, requires investments in this type of modern terminals – added the Undersecretary of State.


During the ceremony, Marcin Horała read a letter from Prime Minister Mateusz Morawiecki. The head of government congratulated and emphasized that the construction of the terminal was an important event: "We are proud to say that the new terminal is one of the most modern facilities of this type in the Baltic Sea basin and in the whole of Europe," wrote Morawiecki.


The modernity of the facility was also emphasized by Jacek Sadaj, Chairman of the Board of the Port of Gdynia Authority. – The building is impressive with technical solutions that will have a significant impact on the amount of goods that will be reloaded and transported by us. It is worth mentioning that the largest ferry units will be able to maneuver freely and safely – he said during the ceremony.


The new facility will allow e.g. to reduce harmful emissions to the atmosphere thanks to the implementation of the Onshore Power Supply system. It allows the ship to be supplied with electricity directly from shore while it is in port, so that the vessels will not have to use their engines and thus create exhaust gases.


The Mayor of Gdynia, Wojciech Szczurek, emphasized the importance of the new terminal for the city: – We are happy that the port is developing, that a great investment has been completed, but also that this new location of the ferry terminal brings it closer to the city center. A little longer walk takes you to Świętojańska Street. I think that many guests who will come to Gdynia through this very modern place, the new ferry terminal, will want to visit our city. This becomes another element of Gdynia's showpiece – he said.


– Building the potential of the port in Gdynia, we feel a serious thrill that we are also building increased revenues to the Polish state budget, that we are this important element of the logistics chain between land and sea, between oceans and other continents – said Kazimierz Koralewski, vice president of the Port of Gdynia Authority. – Looking at the present, we can see that our future, the future of Poland as an exporter and importer, will be better.


Wenda would be proud


Participants of the ceremony had the opportunity to visit the facility and view the port from the observation deck located on the third floor. Volunteers also took part in a cruise on the inner waters of the Port of Gdynia. A film about the investment was also shown. Mariusz Karbowski, the manager of the EU projects department at the Port of Gdynia, told in detail about the new terminal.


Hanna Wenda-Uszyńska, the granddaughter of Tadeusz Wenda, watched with interest the photos accompanying the opening. – He was an extremely modest man, so he would probably be somewhere on the side, but his engineering eye would be looking at this beautiful terminal – she said. – I think that everything is developing according to his vision, because the technical thought was very far reaching. We can see in these wonderful photos, which are shown here at the exhibition, under what conditions the engineers worked at that time. And yet they wanted to do it for Poland – emphasized Wenda-Uszyńska.


The lines are already waiting


The construction of the new Public Ferry Terminal began in autumn 2019. Korporacja Budowlana Doraco was responsible for the works. – This is one of the largest investments in the port for many years – important, beautiful, large and improving the comfort of work of the port employees, but also the future users of this facility – passengers. This is something that makes us very happy. Being a company from the Tri-City, we are happy that we could contribute to building our small local homelands – said Karol Zduńczyk, President of the Board of Korporacja Budowlana Doraco.


During the works, over 7 hectares of the waterfront have been developed. Once the terminal is open, it will be able to accommodate ferries up to 240 meters in length. In addition to the terminal building, a warehouse building, parking lots, a maneuvering yard and a loading ramp were also built. The investment cost amounted to PLN 290 million, with PLN 117 million covered by the European Union.


The terminal will be used by two ferry lines – Stena Line and Polferries. – We are proud that we can enter this area, where in the 1930s our flagship MS Batory started sailing to the United States – said Andrzej Madejski, president of Polska Żegluga Bałtycka - Polferries. In turn, Marek Kiersnowski, Managing Director of Stena Line Polska, emphasized the uninterrupted 26-year cooperation between the lines and the Port of Gdynia. – Today I can declare that on January 1 next year at 9 p.m. one of our ferries will sail from here on its inaugural cruise – he said.


The terminal will be ready to service carriers. As Jacek Sadaj, president of the Board of Port of Gdynia Authority, said, "last modifications" are underway. – It is only arrangement works that will lead to the fact that two operators will be able to function in harmony here. During the day, we will have four calls, four slots, in which ferries will operate their connections with Karlskrona and Nyneshamn.


The work is not over yet


Jacek Sadaj, President of the Board of Port of Gdynia, said that the completion of the construction "is a good sign" and declared further investments. – Wenda built the port for 100 years, we have to expand it for another 100 – he said.


The plans were confirmed by Grzegorz Witkowski, Undersecretary of State in the Ministry of Infrastructure. – All our Baltic ports are construction sites right now, but in Gdynia it's just the beginning, not only in terms of ferry terminal, but also offshore investments. There will be a really big construction site here – he said.


Witkowski also revealed that the Port of Gdynia Authority is preparing a package of investments, which are discussed at the Ministry of Infrastructure with Prime Minister Morawiecki. – The “Polish Deal” reform program is ahead of us, where large funds are also saved, both for the port fleet, the fleet for shipowners and the seaport terminals – Witkowski said, emphasizing that the new terminal was built in a very efficient way. – I think that the most important challenge we face in the coming years is the preparation of an installation port for the offshore industry in Gdynia – he added.


Before the ceremony of completing the construction of the Public Ferry Terminal, another event related to the Port of Gdynia took place. In the center of Gdynia, a mural depicting engineer Tadeusz Wenda has been unveiled on the wall of the building located at Władysława IV 11 Street. The painting covers an area of 210 square meters and will remain on the wall for at least a decade. During this time, it will be regularly maintained. The author of the mural is Krzysztof Iwański. The unveiling of the mural was attended by the Chairman of the Board of Port of Gdynia Jacek Sadaj, Vice President of Port of Gdynia Kazimierz Koralewski, Vice President of Gdynia Katarzyna Gruszecka Spychała, granddaughter of the commemorated engineer Hanna Wenda-Uszyńska, director of the Gdynia City Museum Karin Moder, chairwoman of the Gdynia City Council Joanna Zielińska and leader of the Maritime Economy Forum Sławomir Kalicki.