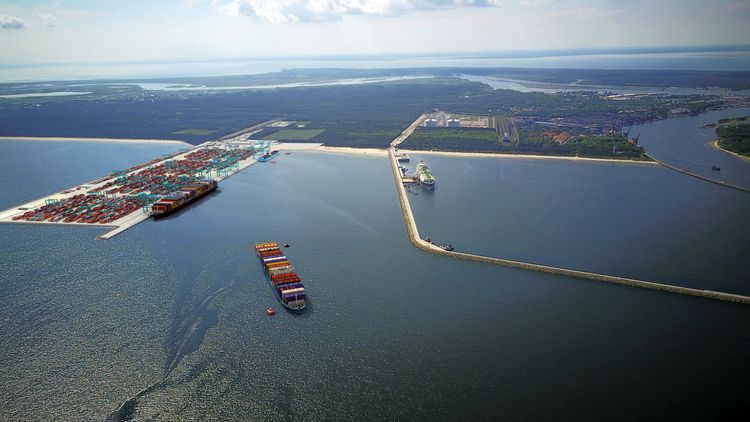 Seaports, Shipping, Logistics
Container terminal in Świnoujście – an opportunity for the port and city developent

It will be a modern and environmentally friendly terminal. New road junctions, terminal access system and railway network will bypass the districts of Warszów and Łunowo, to avoid being a nuisance for residents. The connection of the terminal with the hinterland will be divided between the express road No.3, rail and in the future inland waterway transport systems. In the economists’ opinion - the terminal is needed! Container delivery already accounts for more than 60% of global transport, and the Baltic area has been showing record growth for years.

Prof. Dariusz Zarzecki, an economist at the University of Szczecin points out, that the mentioned 3 million TEU in fact were handled in the ports of the Tricity, especially in Gdansk. The construction of a deepwater container terminal in Świnoujście will change this situation.

Does this project have an economic rationale?

"Definitely yes," says the economist. Deepwater container terminal fits perfectly into market expectations. And the example of Gdansk is the best confirmation of how quickly a port with a low initial number of container volumes can become one of the European leaders.

- Container volumes in this port in 2019 compared to 2007 increased by astronomical 2039.5%, moving Gdansk to 15th place on our continent – reminds professor.
The expert points out that the western geographical location of Świnoujście distinguishes that port from other Baltic competitors.

"This is the shortest maritime route from Central and Eastern Europe to Scandinavia," says Professor Zarzecki. - The container terminal in Świnoujście may certainly be an important place for handling of goods sent to and from the East German provinces and the Berlin metropoly, as well as the southern Poland (mainly Wielkopolska and Śląsk) the Czech Republic and Slovakia. It is also obvious that large mainline container ships entering the Baltic Sea, choosing port of Świnoujście located closer, instead of ports of Gdansk or Gdynia, will save both time and money. According to the expert, the economic advantage of the new terminal in Świnoujście may prove to be deciding in taking over existing, as well as acquiring new container transports.

Ocean ships sailing through the Danish Straits, choosing Świnoujście instead of the ports of Tricity will gain 11 hours one way, both ways would save practically full day. In the ship's operational expenses account, for shipowners this means savings of between $120,000 and $150,000 per trip. These are very strong arguments for investors.

The sense of the project is confirmed by Prof. Horst Linde, a member of the Institute of Land and Maritime Transport of the University of Technology in Berlin.

-The operation of one large container terminal located at the southern coast of the Baltic Sea, compared with at least 5 terminals in the southern North Sea between the Elbe and the Rhine/Meuse/Scheldt rivers means, that there is enough space for the next terminal, in Świnoujście, points out a maritime transport expert from Berlin.

According to the Professor, the terminal in Świnoujście will fill up the gap between Hamburg and Gdansk and offer convenient access to the wide hinterland of Western Poland, Eastern Germany and areas in Southern Europe. Such terminal will be available at relatively short transport distances, and the availability of all means of transport.

- Particular attention should be paid to direct access to the Oder Waterway system, i.e. inland waterways and the possibility of transferring cargo from road/rail to waterways – emphasizes Professor Horst Linde. - Industrial areas in Upper Silesia will be accessible in a more sustainable way than from Gdansk, and access toBerlin/Brandenburg may be better than from Hamburg.

Jerzy Wójtowicz, President of C.Hartwig Szczecin, a forwarding and transport company active on the international market for several decades, has emphasized the necessity to build a deepwater container terminal for years. Global transhipments in all ports exceeded 790 million TEU. According to the calculations of the various institutions, the growth rate in the coming years will remain at 5%, which means a global increase in container volumes over 5 years by around TEU 240 million. Port development plans indicate that they will be able to handle additional 125 million TEU. What about the potential of 115 million TEU?

The question is rhetorical, especially that – as the businessman points out, the Baltic region is the growing faster, and the increases of container volumes will be even higher here.

Świnoujście is a specific place, where the port coexists with the city and spa area. Local authorities, sanatoria and resorts owners do understand the need and benefits of economic development. However, they want to be absolutely sure that port investments will not disrupt the sustainable development of the area, will not disturb the peace of the local community, nor will they harm their tourism and spa businesses.

Therefore, in projects such as the future container terminal, it is fundamental to have the proper port communication and access infrastructure developed.

Łukasz Lendner, Director of Szczecin branch of the General Directorate for National Roads and Motorways (GDDKiA), assures that the development of expressway and motorway network is progressing on time, and that the investments which are carried out will significantly improve the road connection of Świnoujście with the rest of the country and the south of Europe.

- Next year commencement of construction works on the new, two-lane expressway S3 directly at Świnoujście area is planned. Part of that investment is to create a Łunowo junction, which in future shall provide access to the container terminal, and junction for LNG terminal - informs the Director. He adds that the location of road corridor was consulted with the local residents, many suggestions were taken into account, and all transit traffic will bypass residential areas.

Last August GDDKiA have signed contracts for the construction of S3 sections: Świnoujście-Troszyn according to the “design and build” formula, the value of the investment is more than PLN 1.5 billion. According to the plans, in 2024 the expressway, with two lanes in each direction is to be ready on the entire length, from Świnoujście to the Czech border.

Railway companies’ investments are in place too. PKP PLK SA is modernizing the railway network in both ports, Szczecin and Świnoujście already.

- This is an investment for PLN 1.5 billion – informs Ryszard Magdziak, deputy Director responsible for investments in PKP PLK SA. The Director also recalls the modernized railway lines: Szczecin-Świnoujście, and E59 to Poznań. There’s also perspective of modernization of CE59 line (so-called Nadodrzanka), connecting the capital of Western Pomerania with Silesia. Feasibility studies of the various stages of that investment are created.

All these infrastructure investments are already being made. Let's add very important modernization of the Szczecin-Świnoujście waterway with a value of PLN 1.4 billion implemented by the Maritime Office in Szczecin, and investments adapting the internal berths of Szczecin port to the new parameters for a total of PLN 700 million.

Delivery by water, road and rail

Szczecin and Świnoujście Seaports Authority in mid-April will open offers of parties interested in designing, building and then operating of a new container terminal in Świnoujście. According to the plan, the project can be completed by the end of 2024. At the moment the container terminal in Świnoujście is launched, all access and communication infrastructure will be ready, and the diversification of transport routes will enable fact, that additional truck traffic caused by the operations of the terminal will not be noticed by the inhabitants of Świnoujście and tourist.

This can be confirmed by simple mathematical simulations. Assuming annual volumes at the terminal at the level of 1.5 million TEU (equivalent of 20-foot container) - in a month the average turnover shall amount to 125 thousand TEU. Due to the operation of the transhipment hub, approximately half of that volume should be taken over by maritime transit (ship to ship). Therefore about 62,5 thousand TEU per month will be left for inland haulage. If we assume an equal distribution of the 20 and 40-foot containers in circulation, we get about 42 000 containers per month, counting in pieces. It can also be assumed that 60% of this quantity (25 200 units) will be transported by truck transport, and the remaining 40% (16 800) will be taken over by rail.

Of the 25,200 containers per month, the daily average is 840 vehicles, which means 35 trucks per hour. That number of trucks for the collision-free two-lane S3 expressway, bypassing housing areas – is practically no burden.

It is worth adding that the port investments stimulate the development of infrastructure of the whole region, and both the expressways to Świnoujście and the tunnel under Swina River will definitely improve the comfort of driving. We will also commute to Świnoujście by train faster and more comfortably, because the modernization of rail lines means benefit not only for cargo related services, but also for passenger trains.

Competitors do not sleep

All serious players are aware of the potential of the container Baltic market. For example, the Hutchison Group (operating also at the Port of Gdynia), last year launched Port Norvik in Stockholm with a deep-water quay with draft over than 16 m, for 400-meter vessels.

Investments in this area are announced by the ports of the Gdansk Bay. Gdynia, which already includes two container terminals in the inner port, is planning a new one - in the external port. Gdańsk DCT operates in the North Port on two quays and is also planning the third phase of terminal expansion.

Offers can be submitted until April 15th this year.

Proceedings are ongoing to identify the investor and the subsequent operator of the deep-water container terminal. Interested parties may submit their offers until April 15th 2021.