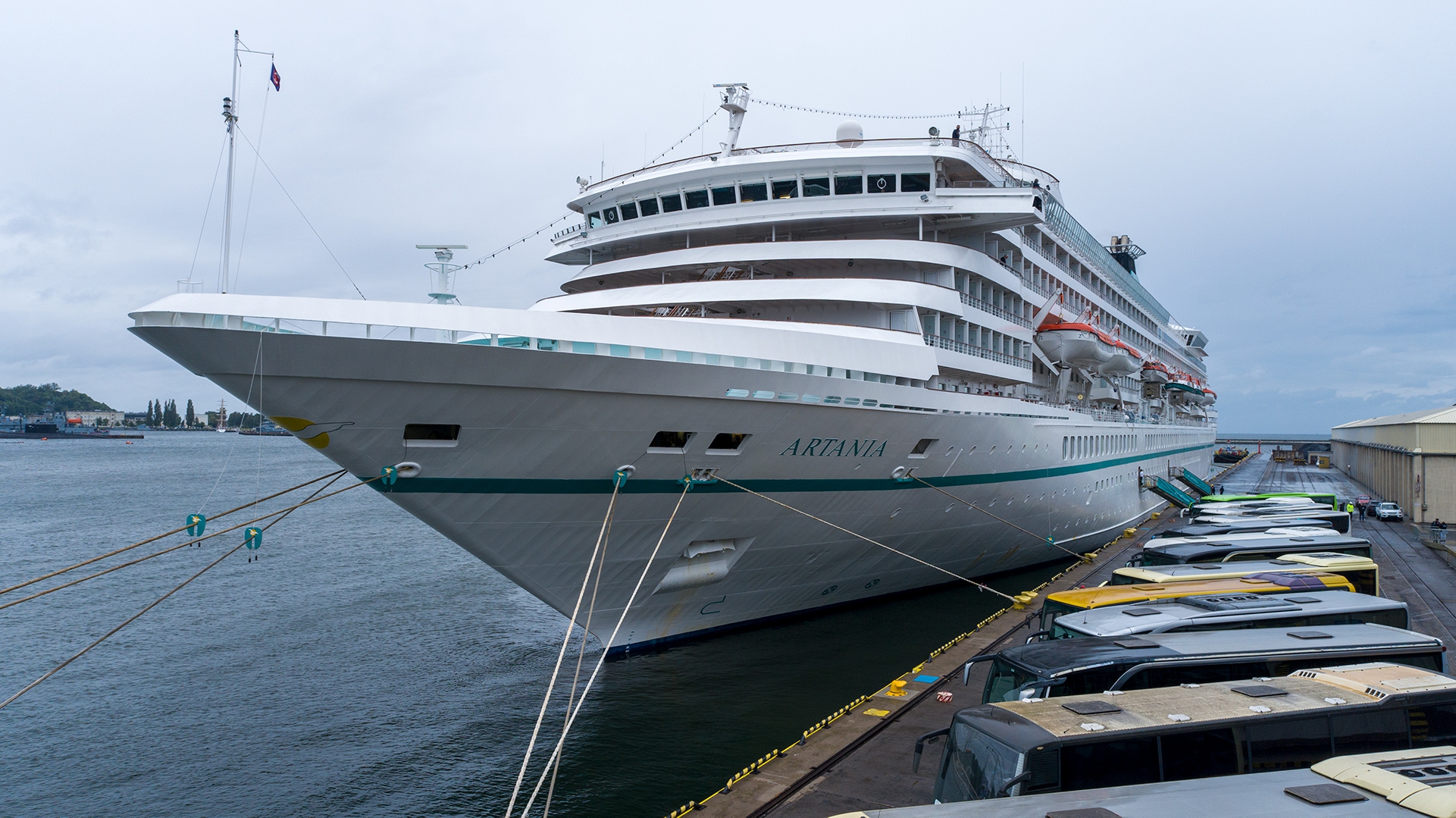 On Tuesday morning, the 230-meter cruise ship Artania arrived at the Port of Gdynia. The ship moored at the French Quay. This is the first cruiser call to Gdynia this year.

Artania came to Gdynia from Klaipeda. The passengers spent a day in the city, then at 5 p.m. the ship set off for the city of Rønne on the Danish island of Bornholm. There were 677 passengers and 480 crew on board the cruise liner.

Artania was built in 1984 in Helsinki by the Wärtsilä shipyard, commissioned by the American cruise company Princess Cruise. Originally, the ship was called the Royal Princess, given to it during a ceremony in honor of Diana, Princess of Wales. The vessel is just over 230 meters long and 32.50 meters wide, and its draft is over 8 meters. Its carrying capacity is 4,661 tons, and the gross capacity is 44,656 tons.

Ships sails under the flag of the Bahamas and is currently operated by Phoenix Reisen, a German cruise line company with three more cruise ships in its fleet. Artania is the biggest of them. Phoenix charters the vessel from MS Artania Shipping.

Gdynia is a port of large cruise ships

The Port of Gdynia occupies the position of the most important and safest Polish passenger port, hosting the largest cruise ships sailing on the Baltic Sea for many years.

The Port of Gdynia hosts about 50 large cruise ships annually, the average length of which is almost 260 meters. Gdynia is also visited by over 100,000 passengers of large cruisers each year. These data refer to the seasons until 2019. In 2020 and 2021, due to the coronavirus pandemic, shipping of large cruisers was reduced to a minimum.

The biggest cruiser that has visited the Port of Gdynia so far is m/v Norwegian Getaway. The vessel is 325 meters long (GT 145.655) and is one of the largest cruise ships in the world - the ship has more than two thousand cabins and apartments for almost four thousand passengers, with over 1,500 crew taking care of them. The vessel was built in 2014 and its owner is the Norwegian Cruise Line.

Since 2001 at the Pomeranian Quay in the Port of Gdynia tourists can find the only one in Poland Passenger Ships Alley.

Port of Gdynia Authority S.A. conducts systematic activities for the development of Baltic cruise shipping, by promoting the port itself and the tourist attractions of the city and the entire Pomerania. It is the tourist offer of our beautiful region that is the main magnet attracting more and more tourists from all over the world. Representatives of the Port of Gdynia Authority S.A. participate in the industry fairs which are very popular among shipowners and the tourist industry, ie SeaTrade Cruise Global in Fort Lauderdale, USA, which are an excellent opportunity for the Company to establish new business contacts.