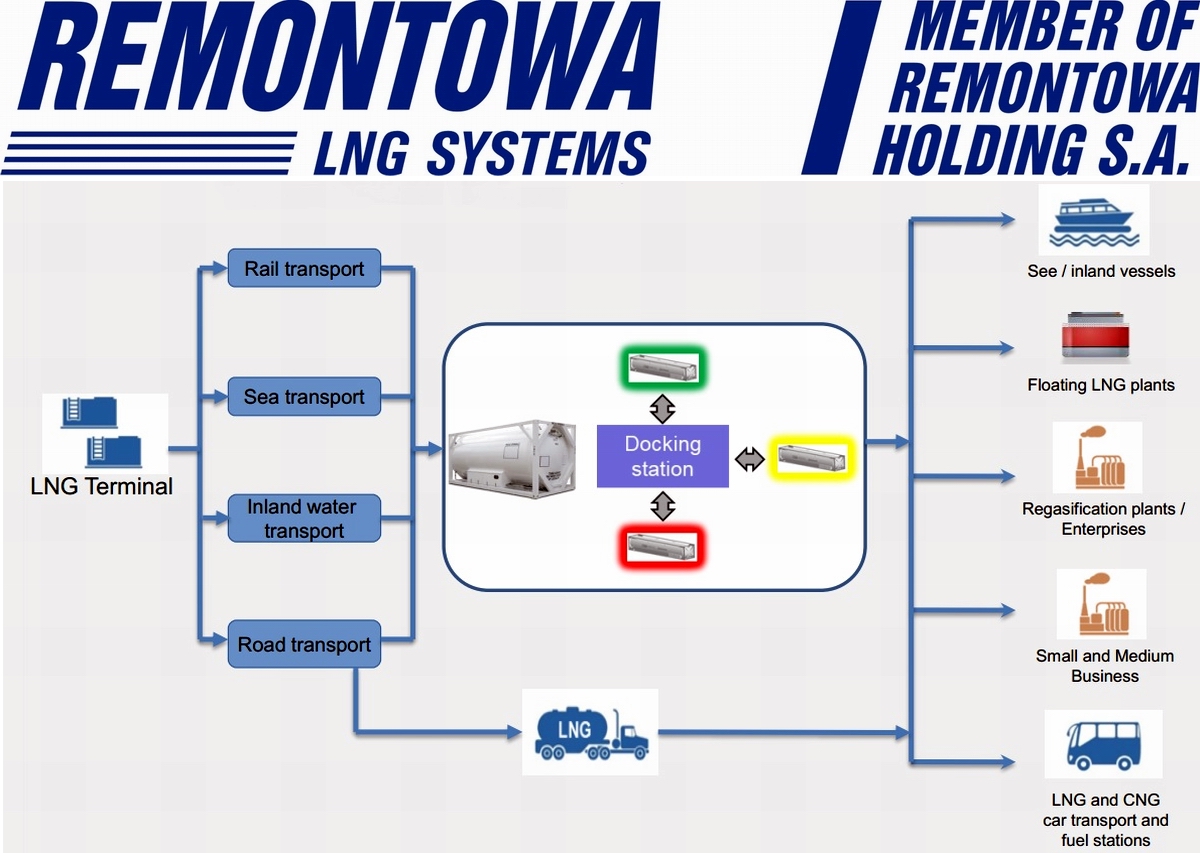 Seaports, Shipping, Logistics
Development of LNG distribution via cryogenic tanks. Launching of a pilot project on construction of a docking station

On December 1, 2017 Remontowa LNG Systems Sp. z o.o. commences implementing of the new pilot project co-financed by the European Union Connecting Europe Facility (Action no 2016-PL-TM-0268-S). The project called "Construction of a pilot docking station, as part of an LNG distribution system based on cryogenic tank containers” will be carried out for the next 3 years. The objective of the project is designing, construction and testing of the pilot LNG docking station.

The main task of the station will be sustaining crucial safety technical parameters of intermodal, cryogenic LNG tank containers, enabling long-term storage. This will allow further LNG distribution via all possible transport means (including road, sea and rail transport not yet used for these purposes). Each of the containers will be equipped in a set of sensors monitoring safe parameters of pressure and temperature conditions of the tank. Those conditions will be visualised by colour light indicators specified for a given state. Thanks to the application of integrated automatics the “intelligent” docking station will be able to restore the optimum, safe pressure and temperature parameters of the tank. The station will have an additional functionality enabling L-CNG refuelling. The construction will be based on a standard ISO frame. This will enable transport of the station to any location, including the port, which in turn will enable efficient bunkering of LNG-powered units. The pilot station will be located in the logistic terminal in Sławków (Poland, Śląsk region), which is a core rail/road terminal located on the Baltic-Adriatic TEN-T Core Network Corridor

LNG (Liquefied Natural Gas) is natural gas cooled to ca. -160°C. In liquid form it has approximately 630 times lower capacity than in normal (natural) state, what increases its "energy density". Additionally the process of liquefying natural gas requires its thorough purification of carbon dioxide, moisture, sulfur compounds and liquid hydrocarbons, what causes that it consists of almost fully pure methane (about 95%). The use of methane reduces emissions of solids and sulfur oxides by almost 100%, of nitrogen oxides by 85% and carbon dioxide by approx. 25%.

In an era of rapidly shrinking crude oil reserves and increasingly polluted atmosphere, LNG is no longer an alternative and is slowly becoming one of the main fuels in the world. Apart from the ecological aspect in favor of LNG also speaks the economic aspect and the fact that it enables diversification of supplies and thus ensures energy security.

Remontowa LNG Systems Sp. o.o. is part of the REMONTOWA holding. The company was founded in 1945, and since 2013 it specializes in the production of LNG power systems. Remontowa LNG Systems is one of the few companies in the world that manufactures LNG fuel systems for shipbuilding. It also produces heat exchangers, steam and water boilers, tanks, coolers, heaters, condensers and steel constructions. The company has manufactures and delivered a complete LNG power supply system among others for the SAMSO ferry – the first LNG-powered ferry in the European Union.