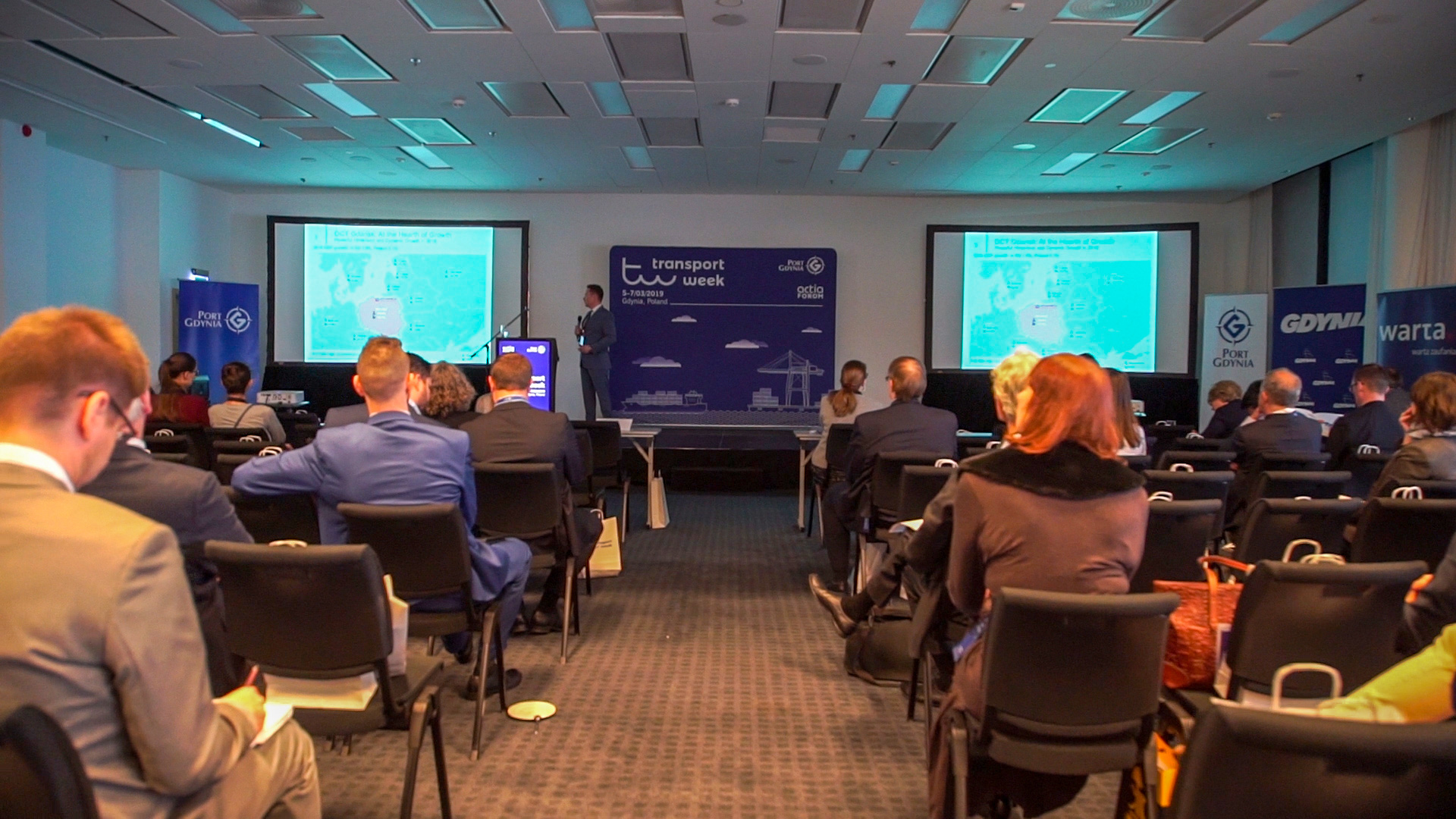 Seaports, Shipping, Logistics
Divining the future of the port market – Transport Week 2019 kicks off in Gdynia

Around 200 participants gathered during the first day of the ninth edition of the Transport Weeek conference. The event, held at the Courtyard by Marriott Waterfront hotel in Gdynia, Poland, on 5-7 March, 2019, focused on port investments, in-depth analysis of the port market, accompanied by an outlook for the near future.

The main event kicked off with an official speech by the Mayor of Gdynia, Wojciech Szczurek. The Mayor underscored the role the port played in the birth of the city and underscored the importance of cooperation between the port and the city hall. Modernization of the hinterland has also been mentioned as one of the highest priorities.

Speaking on behalf of Ryszard Świlski, the Vice Marshall of the Pomeranian Voivodeship, Karolina Lipińska underlined the role Transport Week plays not only as a source of knowledge about the market but also a great way to establish new business contacts. She also mentioned the impact maritime transport has on the development of the region and emphasized the rising competitiveness of ports in the region, reflected in the constant growth of cargo turnover.

The port market is as complex as markets get. Bogdan Ołdakowski (Actia Forum), gave a brief description of the dynamics governing the development of the port sector, with a special focus on the Baltic Sea region, characterizing the latest movements on the container, ro-ro and ferry markets. He also offered a glimpse into the situation in the Polish ports, which are enjoying a long period of growth, resulting in a quite extensive investment programme as shown by a later presentation by the Port of Gdynia.

Finding ways to support port development and competitiveness of the ports was one of the focus points of the event. Christopher Quinn (Wexford Strategies) highlighted the importance of port to port partnerships and some untapped potential that might lie hidden in the shadows. Quinn stated that it is very important to not view ports in a vacuum, but as a part of a broader community also including the cities and business communities they are connected to. A good understanding of the engagement and role of these communities in the operations of the port you’re looking to partner with is one of the keys to a successful partnership.

James Kyritsis (Drewry) switched the attention of the audience from the US towards Chinese investments in European ports and the impact they may have on the Baltic Sea region. Opportunities created by China’s Belt and Road Initiative (BRI), which remains supported by the Chinese government, are linked, among other things, to the growing interest of the country’s investors in global projects and the fact, that the Baltic Sea provides a route to North Europe, accessible to Chinese ports. That said, these investments should be carefully assessed, as experience shows that not all of the projects under BRI are financially viable.

As already mentioned, the Polish ports find themselves in a period of growth, which has been under way for quite a few years. This translates into a broad portfolio of new investment projects. Maciej Krzesiński (Port of Gdynia) listed a number of investments that are a part of Port of Gdynia’s plans for the coming years. The projects include the redevelopment of the railway access to the western part of the port, construction of port reception facilities and reconstruction of the railway and road surface on one of the quays. Completion of these projects, foreseen for the year 2020, will be followed in 2021 by the construction of a public ferry terminal and intermodal infrastructure, located at the port’s logistics centre. Year 2022 is set to see the deepening of the approach fairways and port’s internal waters.

Switching the attention of the audience from Gdynia to Gdańsk, Dominik Landa (DCT Gdańsk) gave an overview of the current developments at the Deepwater Container Terminal in Gdańsk. The terminal’s unrestrained location with dedicated logistics and intermodal access, as well as the terminal’s ability to handle vessels of all sizes are key to maintaining its position in this highly competitive sector, especially considering the continuous growth of the vessel size. Future developments include gate and berth expansions, purchase of new eRTG’s and heavy expansion of the terminal’s railheads. Sufficient intermodal support is one of the key priorities. The terminal cooperates with the city, recognizing the need to modernize rail and road access.

Expansion and development of ports and terminals are a very complex undertaking. Jarno Kuipers (Kalmar) explained how technology and data can be leveraged during the terminal design process. He briefly identified the main challenges faced during the design period, among them the need for comprehensive research of the business cases, which is at times difficult due to scarcity of time available for a proper analysis. And that’s where an integrated and flexible decision tool comes in, processing data faster, allowing to narrow down the details at a later stage and eventually resulting in better decision making.

Environmental regulations are a constant reality in multiple industries these days, the maritime sector being no exception. Alan Arent (Actemium) showcased his companies take on on-shore power supply and how it can allow a port to comply with some of the requirements. Benefits of the technology include lower emissions and noise reduction while at the same time being cost effective. This aspect comes into play in the discussion surrounding ports existing side-by-side with cities and the pressure they often face from local communities.

Obviously, development isn’t possible without funding, which fuels investments. Paweł Wojciechowski (European Commission) spoke briefly about the general objectives of the Connecting Europe Facility (CEF), including the development and modernization of the trans-European networks and facilitation of cross-border cooperation, with a special emphasis on promoting synergy between different sectors. He also touched upon the budget proposed for the transport sector, currently amounting to EUR 24, 115 millions. The European Commission (EC) is confident in smooth operation of the already proven funding delivery mechanism, managed directly by the EC via INEA and based on a “use it or lose it” approach.

Anthony van der Hoest (MTBS) delivered the last presentation of the day, talking about the best practices characterizing a successful maritime investor. He focused on the role of port PPP projects and possible reasons for lack thereof, being a squandered opportunity considering the benefits they offer. Lack of port PPP projects can be a result of poor risk allocation, difficulties related to traffic forecasting and too short time frames. It is essential to always consider market needs first, since that’s what a project’s viability depends on – an obvious, yet often overlooked aspect. Lack of sufficient understanding of the market needs is the main reason for failure.

A discussion panel concluded the conference, further discussing the main themes of the first day of the event – the development and financing of ports. Participants of the panel included representatives from the European Commission, ESPO and the Ports of Gdynia and Rønne.

The Transport Week 2019 returns tomorrow, on March 7th, focusing on the role digitalization and other innovations play in the development of the maritime sector.