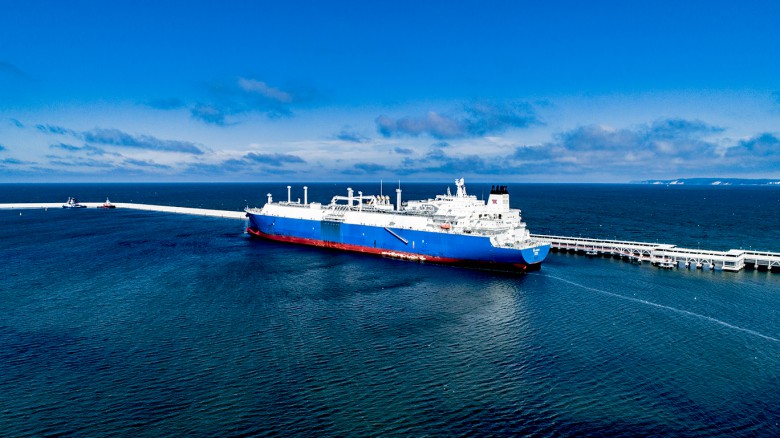 Seaports, Shipping, Logistics
First cargo of US LNG under long-term agreement between PGNiG and Cheniere arrives in Poland [foto, wideo]

The first cargo of liquified natural gas under the long-term contract between PGNiG and US LNG provider Cheniere Energy arrived today at the President Lech Kaczyński LNG Terminal in Świnoujście. The long-term contract, which was signed in November of 2018, will total approximately 39 bcm of natural gas over the 24 year period of the agreement.

The official reception ceremony of the first delivery at the LNG terminal in Świnoujście included representatives of the government of the Republic of Poland, local authorities, as well as executives from PGNiG and Cheniere Energy.

“Two years ago, in this place, together with our partners from Cheniere we greeted the first ever delivery of American LNG to Poland and to this part of Europe. The cargo, purchased as part of a spot transaction, came from Cheniere. Today we are also meeting with our American partners and with today's delivery we are launching the first long-term contract for the purchase of LNG from the USA,” said Piotr Woźniak, President of PGNiG Management Board. “Our portfolio of contracts with U.S. suppliers covers over 9 billion cubic meters of natural gas after regasification annually – that is more than we import from Russia. Such a volume strengthens Poland's energy security, but also gives us the opportunity to actively participate in LNG trading on the global market,” he added.

Oak Spirit – the LNG carrier that arrived at the terminal in Świnoujście – provided about 165 thousand cubic meters of LNG, which after regasification equals about 95 million cubic meters of natural gas. It was the 65th delivery of LNG to Poland since the launch of the LNG terminal.

“This first cargo under our long-term agreement is the start of more than two decades of partnership that will bring reliable, clean, and secure energy to Poland,” said Anatol Feygin, Executive Vice President and Chief Commercial Officer for Cheniere. “We are honored to stand with our partners today to welcome this inaugural cargo, which will be followed by many more for years to come.”

Deliveries will be based on DES (delivery ex-ship) formula – delivery to the terminal in Świnoujście is provided by the seller. Earlier, supplies of U.S. LNG were coming to Świnoujście as part of spot transactions and as part of a medium-term contract. PGNiG has received seven cargoes of such type so far. In June 2017, the company received the first ever LNG load from the United States – a spot supply from Cheniere Energy.

About Cheniere
Cheniere Energy, Inc. is the leading producer and exporter of liquefied natural gas (LNG) in the United States, reliably providing a clean, secure, and affordable solution to the growing global need for natural gas. Cheniere is a full-service LNG provider, with capabilities that include gas procurement and transportation, liquefaction, vessel chartering, and LNG delivery. Cheniere has one of the largest liquefaction platforms in the world, consisting of the Sabine Pass and Corpus Christi liquefaction facilities on the U.S. Gulf Coast, with expected aggregate adjusted nominal production capacity of up to 45 million tonnes per annum of LNG operating or under construction. Cheniere is also pursuing liquefaction expansion opportunities and other projects along the LNG value chain. Cheniere is headquartered in Houston, Texas, and has additional offices in London, Singapore, Beijing, Tokyo, and Washington, D.C.

About PGNiG
Polish Oil and Gas Company (PGNiG) is the leader of the Polish natural gas market. Listed on the Warsaw Stock Exchange the company’s core business includes exploration and production of natural gas and crude oil. Its key subsidiaries import, store, sell and distribute gaseous and liquid fuels. They also generate heat and electricity. PGNiG holds stake in about 30 companies including entities that provide professional geophysical, drilling and maintenance services. PGNiG holds exploration and production licenses on the Norwegian Continental Shelf and in Pakistan. It also holds a license in the United Arab Emirates. The exploration and production activity in Norway is carried out by PGNiG Upstream Norway. While Munich-based PGNiG Supply & Trading is engaged in gas trading in Western Europe, also operating the LNG trading office in London.