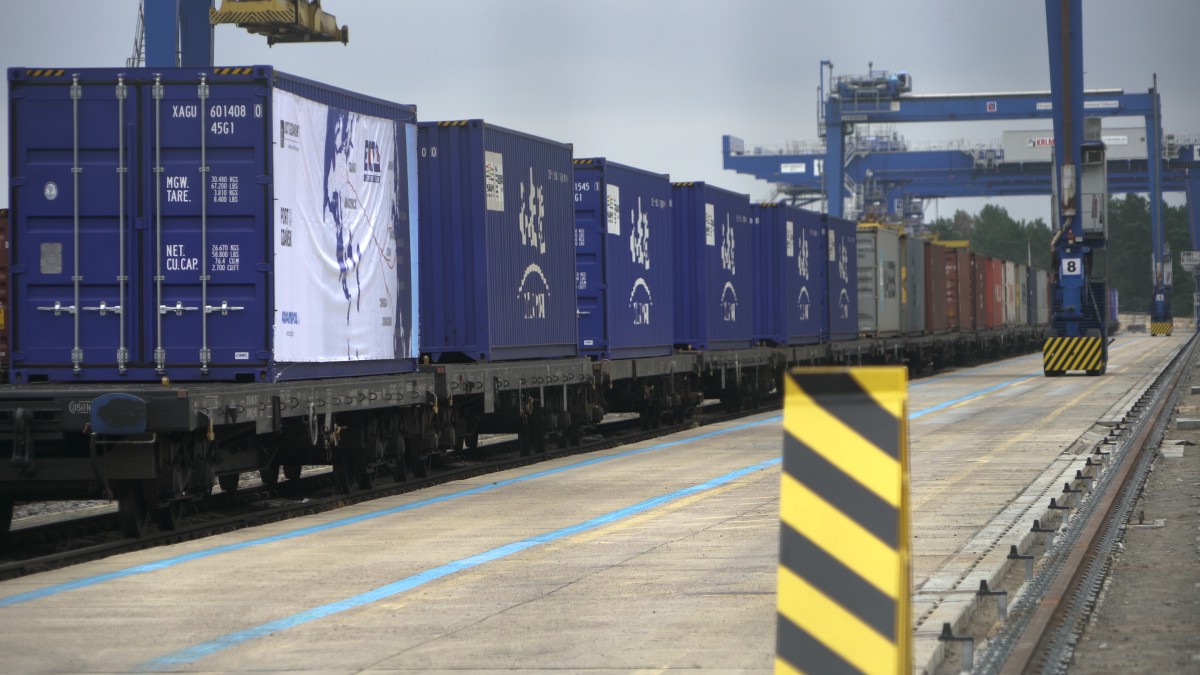 On November 21, 2019, DCT Gdansk launched the first permanent railway connection of the Euro China Train. The train will regularly arrive from Xi'an in China via the Adampol Małaszewicze land terminal to the DCT maritime container terminal in the Port of Gdańsk.

EnlargeThe arrival of the train opens a whole new chapter in the context of intermodal transport and the "One Belt, One Road" concept, which involves creating a fast and secure connection between China and the rest of the world. From the very beginning, Poland was an important and integral part of this initiative. The ceremony is the culmination of many months of talks conducted by Polish authorities and companies: The Port of Gdańsk Authority, Adampol and DCT Gdansk, involved in the development of this initiative.

EnlargeThe first train was officially welcomed by the representatives of Polish authorities and from other countries. The Ministry of Maritime Economy and Inland Navigation was represented by Grzegorz Witkowski, the Undersecretary of State. The Deputy Minister thanked the representatives of the companies for their contribution to the development of intermodal transport and emphasized the high dynamics of the development of the Port of Gdańsk in recent years.

EnlargeThe time it takes for rail freight from China to reach the Małaszewicze terminal, one of the largest railway terminals of international importance in Poland, ranges from 9 to 10 days. Travel time from Małaszewicze to Gdansk is only 1 or 2 days, and it is possible to shorten the whole transit even to 10 days. Another train from China is scheduled to arrive in December, and regular weekly transports on this route will start as early as in January 2020.

Enlarge"The new rail link from China directly to the Port of Gdańsk is an alternative to Western European ports, which significantly reduces the time of container delivery to the Scandinavian and British markets. We see it as an opportunity to use our highly developed network of connections and transhipment infrastructure - says Łukasz Greinke, the President of the Port of Gdańsk Authority S.A., present at the event. "Thanks to this solution we are able to accelerate the transport of goods from China up to as many as 5 days. It is also important to remember that there are fewer operations on the container, which translates into lower costs. From now on, the Port of Gdańsk can offer a faster, cheaper and more competitive service than the current solutions."

Enlarge"Since 2010, DCT Gdansk has operated direct ocean connections with the Far East, enabling Poland to connect with the largest maritime transport trade route; between Europe and Asia. It also ensures efficient trading in products from our region with Asia. Today we are witnessing the launch of a permanent railway link between China and Gdańsk and we are happy to be part of this service. It is an added value for the port and an extended range of possibilities for its customers. This proves that sea and land transport can develop and co-exist in harmony, thus strengthening the position of the Port of Gdańsk and the DCT terminal as the Northern Gateway to the fastest-growing region in Europe." comments Cameron Thorpe, the President of the Management Board of DCT Gdansk.

Adampol company, involved in the creation of the Euro China Train service, has been operating in the area of international and domestic transport of passenger cars, commercial vehicles and vans for 20 years. The company has at its disposal several thousand car transporters and several hundred specialized wagons.

Enlarge"The Adampol company has many years of experience in reloading trains from China at its terminal on the Polish-Belarusian border. Every day, 19 trains from all major Chinese land terminals pass through Małaszewicze. The connection between the Adampol Małaszewicze land terminal and the DCT maritime terminal opens up a number of competitive transport routes, e.g. those leading from China via Hamburg and Duisburg to the UK or Scandinavia can be replaced and consequently accelerated up to as many as 5 days. Alternative transport routes, which will strengthen even more the position of the port of Gdańsk in Europe. - adds Elena Łukanowa, the President of the Management Board of Adampol S.A.