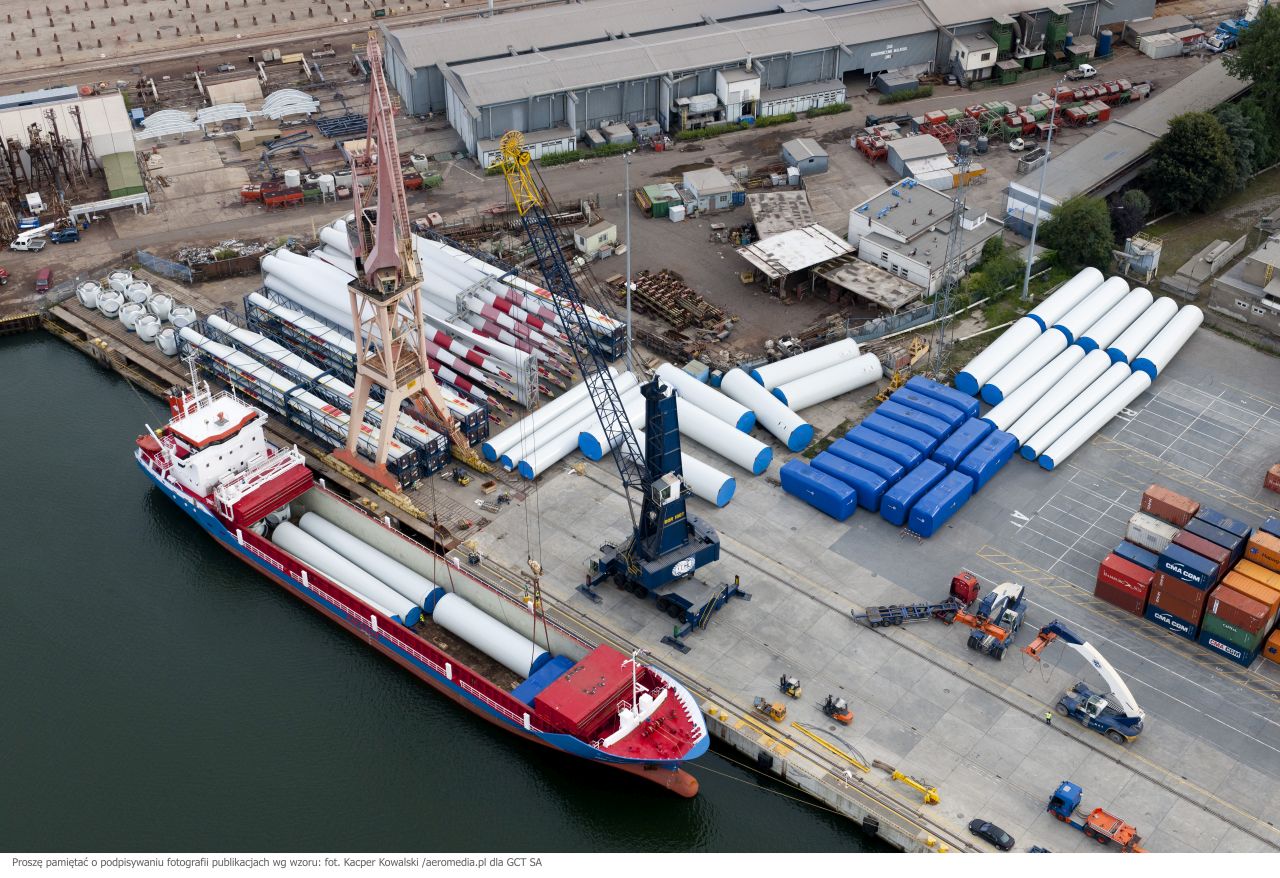 Seaports, Shipping, Logistics
GCT in the Port of Gdynia. A terminal with a lot to offer in the Polish offshore game

They have been operating on the Tri-City port market since 2006, they have completed 29 wind power plant projects in Poland, co-created many spectacular offshore investments abroad and their annual potential throughput is over 600 thousand TEU. We are talking about Gdynia Container Terminal (GCT), which is a part of international group Hutchison Ports. We talk to CEO of GCT about his experience in onshore, participation in Polish offshore, and upcoming plans.

Gdynia Container Terminal is located at Bulgarskie Quay in the Container Basin of the Port of Gdynia. It covers an area of 19.6 hectares - it has 620 meters of its own quay and also uses 192 meters of public quay.

- We are the first terminal in Gdynia, if not in Poland in general, which started to carry out onshore projects. The first of them appeared already in 2009. In total, 365 turbines for 29 onshore wind farms passed through our terminal - recalls Jan Jarmakowski, managing director of GCT, which is a part of CK Hutchison Holdings conglomerate from Hong Kong.

Turbines from Gdynia used to go practically all over the country. However, the situation changed in 2015. Since then, the company has been recording growing container turnover, hence the decision to set aside onshore projects.

- And it is not a coincidence, as containers are the main business of Hutchison Ports group, to which we belong. It is a business that brings relative stability, grows a few percent a year - GCT's managing director points out. - Last year we exceeded the 400 thousand TEU milestone, and this year we will certainly improve the result.

- For example, the port in Gdansk operates two direct connections to the Far East. That is why it is more oriented towards import cargo - quotes the head of GCT.

BTC tender. Will there be development next door?

Let's recall. In August this year, the Port of Gdynia announced a tender for a container and installation terminal for offshore wind farms.

In practice, it means that the area currently occupied by BCT will be enlarged by almost 1/3. The lease is directed towards handling of containers and elements of offshore wind farms, thus it is to be one of the elements of the temporary installation port.

The bids will be evaluated in terms of, among others, estimated revenues, number of containers handled and evaluation of the concept of handling offshore wind farm components. The bidders will be obliged to contact the owners of the Polish offshore wind farm concessions on the Baltic Sea in order to establish the necessary conditions for the presentation of the land development offers. The contract will be effective from the first of June 2023.

Will GCT, which is located right next to it, use the seemingly ideal opportunity and benefit from the participation in the tender for BCT?

- We are currently analysing all possibilities offered by Polish port authorities. We are interested in and looking at the proceedings for the BCT terminal, but we have not made a final decision. You have to remember that we operate commercially. The project must have its solid financial justification. In short, it must be profitable', sums up Jarmakowski.

The Outer Port in Gdynia. This business will definitely pay off

At the same time, it recalls that GCT participates in the proceedings concerning the External Port in Gdynia.

- We take part in this project as one of four entities. The scope here includes construction of an offshore terminal. Looking at the perspectives of offshore development in Poland, i.e. 5.9 GW in the first attempt (the potential is estimated at 28 GW, ed.), there is a big chance that such a terminal will be used profitably for many years - believes Jan Jarmakowski.

- There is no denying that Gdynia is a natural place for us. We are already anchored here - he jokes.

He also recalls that there is an ongoing debate in the maritime industry, as well as on the national forum, regarding the support of the port sector for Poland's energy transition.

- For us it is extremely important. For Polish, for consumers of electricity, for people who understand the whole complexity of economic processes - he says.

- We speak out on various forums, we have talked to the board of the Port of Gdynia, declaring our full support for projects where we can use our experience. And within the Hutchison Ports network we have the expertise. We did offshore projects in the port of Harwich in Great Britain, which was the base for three big British investments.

- We handled 363 turbines with a total capacity of over 1.3 GW for these three projects between 2009 and 2013 - recalls Jan Jarmakowski. - We still have engineers in our group who remember these tasks very well.

As he points out, Hutchison Ports' projects in the Port of Harwich were significantly different from those planned for the Baltic.

- At present, we are talking about turbines over four times larger, which does not mean that it is an obstacle in the realization of the task. We have experience, but it has to be adjusted to the new realities. The challenge is going to be much more serious due to the weight and logistics of the turbine components," he emphasizes.

- We have repeatedly pointed out that in order for Polish ports to meet this challenge, they need better quality infrastructure. And above all, storage yards prepared for heavy constructions.

As an example, he says that it is already known that elements of farms, which will be handled by Polish ports, weigh even more than 800 tonnes per piece.

- Polish ports have so far had to deal with elements whose weight did not exceed 100 tonnes - he points out. - There is also talk of propellers 115 metres long. Today we handle approximately 70-metre long ones.

Hutchison Ports is currently operating an active terminal in Amsterdam. - Exactly the same equipment as at that terminal will have to be deployed in Gdynia. It is a project of 89 turbines for a Dutch Fryslan farm on a lake. I believe that Polish port constructors will also be up to the challenge - says Jarmakowski.

GCT. Which way will the Gdynia terminal go?

The head of the terminal stresses that the company does not want to give up containers.

- Offshore projects will be executed within a few years. Today, nobody in Poland is able to make a specific declaration, saying that this business can be operated for 20-30 years. Looking at the energy potential - it is said to be 28 GW for Poland and over 80 GW for the Baltic Sea - it is possible that such an installation terminal will be used for a longer period of time - GCT CEO forecasts.

- We would like to base our activity in Poland both on containers and offshore projects. We are talking about potential cooperation with many entities.

What troubles the GCT management today?

- We certainly lack land for development. So there is nothing strange in the fact that we are looking at the proceedings announced by ZMPG in terms of our activity - he says.

- As a terminal operator without access to port areas, we are not able to develop and offer wider services. However, the container transport market is developing dynamically. What is more, further forecasts are also optimistic.

The CEO reveals that GCT plans to develop intermodal connections to the Port of Gdynia, changing the model of cooperation into a more effective one.

- We see that Poland lacks a large dry port that would cooperate with Tri-City terminals and possibly with the one in Świnoujście, which will probably be built in the future. It is important for us to be present in these talks because we have experience from European ports, especially Rotterdam and Barcelona. We have been developing intermodal projects around large container terminals there for a long time - he justifies.

- It is our natural location, from which we can benefit economically enough by shaping logistic connections from the north to the south - he points out.

Offshore may be a recipe for rising energy prices

The president of GCT has no doubts that there is no turning back from the energy transformation, and offshore projects in the Polish sea are crucial in it.

- Transformation will give us access to reasonably cheap sources of green energy. Without it, the economy will not develop dynamically. That is why offshore will be an important element in stabilising, and perhaps even lowering the prices of electric energy in Poland - believes Jarmakowski.

- We would like to support the Port of Gdynia, as well as the whole country, in achieving this goal in the shortest possible time - he concludes.