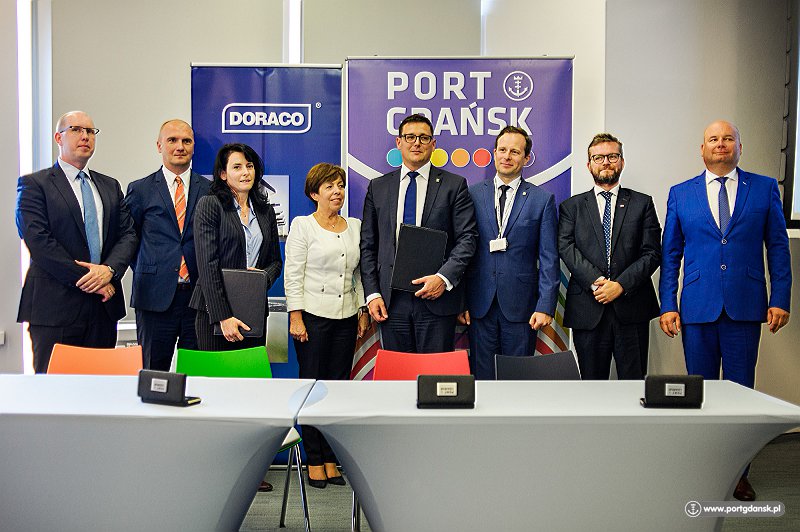 Seaports, Shipping, Logistics
Gdansk is about to launch the expansion of its quays and the fairway

The project concerning the expansion of embankments and the upgrade of the fairway at the Port of Gdansk is officially set for execution. On 17 August 2017, the Port of Gdansk Authority signed an agreement with the contractor on the performance of construction works in the area of the Obroncow Poczty Polskiej Quay and the Mew Quay. The cost of the investment is over PLN 40m.

The Port of Gdansk Authority signed a construction works agreement with Doraco. The agreement covers the performance of works aiming at the expansion and upgrade of the quays to streamline shipping at the Port of Gdansk. The actions are a part of the Port's multi-stage infrastructure upgrade project which includes dredging the fairway and reconstructing the quays at the Inner Port. The project's total value exceeds EUR 110m. The funds come in 85% from the European Union funds obtained as part of the Connecting Europe Facility (CEF). The documents were signed in the presence of the representatives of the Ministry of Development and the Ministry of Economy and Inland Navigation.

The Connecting Europe Facility supports the development of the most important transport routes in the European Union. The Port in Gdansk is one of the key points of the Baltic - Adriatic route. Each coin spent on its expansion is therefore not an expense, but an investment. We have already obtained PLN 500m from CEF for three investments executed solely by the Port Authority. At least just as much will be granted e.g. to PKP PLK to improve rail connection with the port - says Witold Slowik, Vice-Minister of Development.

- The port in Gdansk is the key communication node in the Baltic Sea, and it is developing rapidly - says Andzelika Cieslowska, President of the Management Board of Doraco. - We are glad that we have a share in the process. Work in the region of the port's internal fairway, the Mew Quay and the Obroncow Poczty Polskiej Quay is the next advanced hydrotechnical project in Doraco's portfolio and another one in the Port of Gdansk.

At the end of July this year, an agreement between ZMPG and the contractor of project and environmental documentation for the expansion of core network nodes as related to the road and rail infrastructure was also signed.