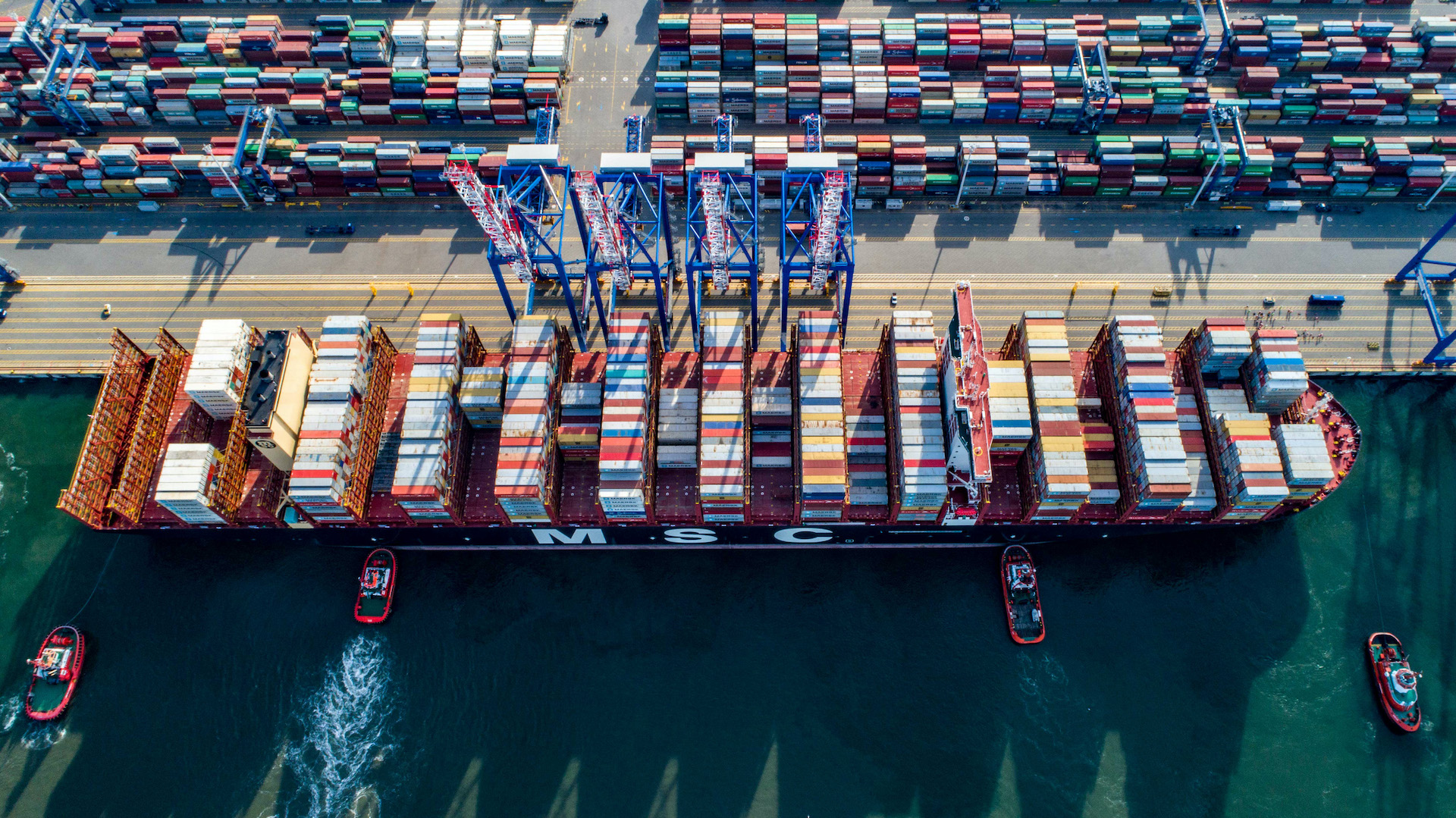 Global economy development and trade activity should be regarded as basic drivers for the maritime container business. Issues like the harsh dispute between the United States and China causing a raising of tariffs as well as factors contributing to economic uncertainty included the government shutdown in the United States, the United Kingdom’s departure from the EU, and changes in monetary policy in major economies as the key drivers of changes in global trade in 2019. The last quarter of 2019 was also the starting point of the COVID-19 pandemic, initially influencing the Chinese economy and then spilling out over the world. The main channels through which COVID-19 harms economies include weaker investment, consumption and trade, erosion of human capital, and shifts in labour markets, slowing momentum in labour reallocation as well as heavy debt burden. A factor directly affecting the economies was the lockdown introduced by most countries of the world in the first half of 2020.

As result, global GDP growth slowed to 2.3 per cent and the world merchandise trade volume declined by 0.1 per cent in 2019, the first contraction since the global financial crisis of 2008-09. The outcomes of the fourth quarter constitute a mostly negative trend. Seasonally-adjusted merchandise trade volume was down by 1.0 per cent in 4Q 2019, which is equivalent to a 4.6 per cent decline on an annualised basis. Merchandise exports were down 2.2 per cent in Asia (already hit by the epidemic) and 0.4 per cent in North America. It soon turned out that these results were just the beginning of the crisis that spilled over the world in 2020.

Considering the EU member states, GDP decreased by 3.3 per cent in the first and by 11.4 per cent in the second quarter of 2020 (quarter-on-quarter). Statistics also reveal that the EU household final consumption expenditure affected by COVID-19 containment measures ped by 4.2 per cent and 12.0 per cent respectively . Economic and social disruptions brought by COVID-19 resulted also in a dramatic decline in the trade. The value of global merchandise export declined by 2.8 per cent in the first quarter and by 15 percent in the second quarter of 2020 . At the same time, the Asian export shrunk by 6.1 per cent. Considering the outcomes of the second quarter, Europe and North America suffered a significant of 21.8 per cent and 24.5 per cent respectively.

WTO economists estimated that world trade would fall between 13 per cent and 32 per cent in 2020 as the COVID-19 pandemic disrupted normal economic activity and life around the world . UNCTAD expects a decline in trade of around 20 per cent for the year 2020. Similarly, global growth is projected to decrease to 4.4 per cent in 2020 . Europe (-7.2%) and North America (-4.9%) are regarded as regions affected by pandemic the most . The World Bank's recent forecast would see global output decline by 5.2% in 2020, falling between the WTO's optimistic and pessimistic range . The coronavirus outbreak could cost the global economy from $1 trillion up to $2 trillion (“Doomsday scenario”) according to the United Nations Conference for Trade and Development (UNCTAD) . Coronavirus outbreak would paradoxically ease the trade tension, especially on the China-US line. The “Phase One” agreement which was signed on 15 January 2020 to lower some US tariffs on imports from China to the US is the best example .

As was previously touched upon, container ports and shipping activity has been defined by international trade tensions, mostly between the US and China as well as the Brexit affair in 2019. Finally, the traffic improvement of 2.3% was reached, which means that a volume of about 155.5 million of 20-foot equivalent units (TEUs) or 1.3 bn tonnes cargo in boxes was shipped by vessels worldwide. At the same time, container ports transhipped about 802 million TEUs, while the top 50 container ports served 517 million TEUs (+3.3%) . It should be mentioned that the last quarter of 2019 was the seventh straight quarter of slowing growth, so disruption to the container supply chain did not start only with the coronavirus .
At the local Baltic level, the volume of 11.24 million TEU was reached by ports in 2019. The result of a 3.2 per cent increase, however, meant a reduction in the dynamics. The container traffic grew the fastest in Poland (+ 7.5%), reaching the level of 3.05 million TEU.

Market changes on a global scale caused by the coronavirus outbreak had a significant influence on the container business from the beginning of 2020. Many producers of containerised goods have halted production or are producing at lower levels. The Chinese hinterland transportation of containers was in massive labour shortages. Faced with the lower container volumes, container carriers have started a large-scale blanking of sailings (cancelling them) . For instance, vessel calls at Shanghai and Yangshang ports together fell by 17% in January compared to 2019 . In February, calls at Chinese ports ped by approximately 30% . The Port of Long Beach’s TEU traffic ped by 9.8% and the Port of Los Angeles suffered a 22.9% decrease in its TEU volumes in February 2020. After the first wave of coronavirus containment measures, a gradual reconstruction of the market occurred. Considering the key global container market – China, a year-on-year decrease of 5.4 per cent (120.2 million TEU) was noted from January to June 2020 . The achieved throughput of the top European container port in Rotterdam was only 3.3 per cent down in 2019 (in tonnes, 7% in TEU) . Another example is the DP World Limited handling 33.9 million TEU across its global portfolio of container terminals in the first half of 2020, with gross container volumes decreasing by 5.3 per cent .

The economic slowdown resulting from the pandemic also affected container handling in the Baltic seaports. In the first half of the year, traffic was reduced by 6.1%, which translated into a turnover of 5.37 million TEU. Also in this case, while most of the national markets were losing, the biggest restrictions affected Russia ( 129.7 thousand TEU), Poland ( 97.8 thousand TEU), Lithuania ( 72.0 thousand TEU), and Finland ( 59.6 thousand TEU).

Considering the relation between the economy and container business, the multiplier factor can be evaluated. In the past, the multiplier effect has been usually estimated at 2 (container traffic growth was twice as GDP development). In 2019, the factor ped to approximately 1. Currently, it has fallen back to 0.3 as protectionism and a global slowdown affect growth .

At the beginning of the pandemic, Alphaliner predicted that coronavirus could cut 0.7 per cent from 2020 global container throughput growth . Maersk reported weaker market conditions and global container growth of only 1.4 per cent . In May it was already obvious that the market performance would be significantly worse. According to the Drewry expertise, global container cargo handling would go down 8 per cent in 2020, however, the pandemic lingering deep into a year would result in a 12 per cent in container traffic followed by another 6 per cent decline in 2021 .

The fleet of Container Vessels

Despite the gradual slip in the container traffic development rate, further investments in tonnage were completed in 2019. The total capacity of the world’s cellular containership fleet passed the 23 million TEU mark in September 2019 . At the end of the year, the fleet reached the capacity of 23.23 million TEUs (+3.5%, y-o-y). Deliveries of container carriers covered about 1.2 million TEU or 178 vessels (2019). What is interesting, the global container fleet has reached the next, 24 million TEU milestone in September 2020. Moreover, the order book includes 282 vessels with a total capacity of 1.6 million TEUs today (10.2020) . Further expansion is also expected, hence the global container fleet market size should grow by 5.34 TEU during 2020–2024 .

The limited market demand in the first half of the year and the gradual growth of global fleet capacity extended the volume of the idle fleet. In a key moment (March 2020), it reached the capacity of 2.5 million TEU or 10.6 per cent . In mid-year, thanks to charter market revival, the idle container fleet was reduced to 4.1 per cent (0.97 million TEU).

Despite all negative effects of coronavirus outbreak the gradual improvement of freight rates, as well as lower bunker prices (despite the implementation of a new IMO sulphur regulation), were surprisingly lifting container carriers’ half-year profits. Considering the top global carriers, the average operating profit margin increased by 3.2 per cent up to 11.4 per cent in 1H 2020. At the same time, the net profit grew by an astonishing 472 per cent. For instance, the global leader – Maersk Group – achieved a net profit of USD 652 million in the first half of 2020 (USD 503 million in 1H 2019). Significant improvement and value of net profits were achieved also by Hapag-Lloyd (USD 314 million), COSCO (USD 274 million), or CMA CGM (USD 236 million) .

An important issue for the container business in the past months has been also the regulation on sulphur emissions implemented by the International Maritime Organisation (IMO). The new restriction prohibits vessels from emitting more than 0.5 per cent of SOx throughout a voyage. The first stage of implementation is the global upper limit on the sulphur content of ships’ fuel oil reduced to 0.50 per cent from 1 January 2020. So far, the total sales of low sulphur fuels (LSFO) did not exceed 8 per cent. In December, the share of LSFO with a total sales jump up to 70 per cent . Due to falling fuel prices, the shippers did not feel the changes and even improved their economic results.

Another major talking point is the growing importance of the Northern Sea Route (NSR), the Arctic passageway which may potentially greatly reduce the transit time between Asia, Europe, and North America. Russia, which is investing in the nuclear icebreaker fleet, sees opportunities for the development of the connection. Interestingly, the initiative met with a lot of contempt from companies both from the industry and transport sectors. The ecological threat to the Arctic has become a premise for the initiative of the companies (e.g. Ralph Lauren, Puma, Allbirds, Artizia, Bureo, Hudson Shipping Lines, International Direct Packaging, Kuehne + Nagel) that signed the Arctic Corporate Shipping Pledge launched by the Ocean
Conservancy and Nike in October 2019.

In conclusion, there is no doubt that the key issue is the further course of the pandemic, which is hitting the global economy more and more in the fall. The problem is that we do not know the magnitude of the knock on effect of COVID-19 or when it will come to an end. As the virus continues to spread, it remains immensely difficult to forecast the medium to long-term implications, yet the short-term consequences are clear – the demand is ping. Thus, three elements have become the primary challenges: capacity shortages, inability to plan, and disruption of supply chains . Returning to the question of how to plan container business for the future, we can point to the IMF prescription that says ‘Hoping for the Best, Prepared for the Worst’.