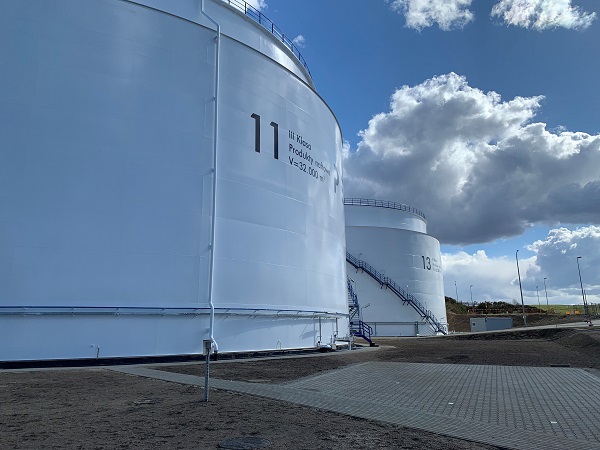 Seaports, Shipping, Logistics
Infrastructural investments of the Port of Gdynia and PERN

Port of Gdynia Authority S.A. and PERN have tightened their cooperation aimed at strengthening the Port of Gdynia as an independent maritime fuel hub.

The fuel depot in Debogórze at the back of the port, connected by pipeline directly to the liquid fuel terminal in the Port of Gdynia, was expanded by two new tanks of 32,000 m³ each. Thanks to this, the storage capacity of the depot has increased to nearly 260 thousand m³. Soon, the construction of another tank will start and it is scheduled to be commissioned next year. The comprehensive development plan of the depot includes not only the expansion of the storage capacity, but also the installation of pipeline transport and modernization of the railroad front. Moreover, in co-operation with PERN, Port of Gdynia Authority S.A. is implementing investments at the Liquid Fuels Handling Terminal. The new facilities will allow PERN's customers to import and further distribute diesel more efficiently.

The investment is aimed at adapting storage and technological capabilities to market conditions. Within the scope of the investment task concerning construction of storage tanks 2x32.000 m3 in BP21 in Dębogórze, an innovative construction technology was used. It eliminated the need to set up a storage area in the vicinity of the construction site for roof assembly and thus avoided cutting down a large area of forest for the purposes of preparing this area.

An ecologically friendly and effective solution was also applied to reinforce a large slope area with a fully biodegradable coconut anti-erosion GeomanetEKO grid instead of a cheaper solution using LDPE plastic geogrids.

“Our marine fuel hub - the terminal for petroleum products in Debogórze - is one of the pillars of a diversified liquid fuel supply system for Poland. We enable our customers to import fuel on a large scale by sea from any region of the world. We are constantly raising the bar and that is why we expand and modernise our depots, an example of which is the just finished second stage of the Megainwestycja programme,” said Igor Wasilewski, the CEO of PERN.

The Fuel Depot in Gdynia Debogórze, which uses the fuel terminal on the breakwater of the Port of Gdynia, is becoming a significant link in the import of ready fuels by sea, thus strengthening the energy security of Poland.

“Our investments contribute to record-breaking liquid fuel handling at the Port of Gdynia. We are glad that the extension of the infrastructure will significantly increase the handling capacity of the fuel base in Debogórze, allowing us to distribute fuel in volumes that meet the current and future needs of the domestic fuel market,” comments Adam Meller, President of the Port of Gdynia Authority S.A.

The Megainvestment Programme implemented by PERN aims at ensuring energy security of the country. As part of the programme, in April PERN announced a tender for the construction of 7 storage tanks with a total capacity of 224,000 cubic metres along with the accompanying infrastructure at its fuel depots in Koluszki, Nowa Wieś Wielka and Dębogórze.

The Port of Gdynia Authority S.A., in view of the observed increases in liquid fuel handling in the maritime transport market, already in 2017 decided to implement an investment programme aimed at modernising the Liquid Fuels Handling Station at the Port of Gdynia. The Liquid Fuel Handling Station, located at the breakwater, was equipped with a new nozzle together with a foundation and associated installations, which was put into operation in March 2020. In April this year a tender was announced for the elevation of the existing R203 Marine Loading Arm at the fuel terminal in the Port of Gdynia with a steel adapter. The complementary investments are conducive to the dynamic development and growth in cargo handling in this group of goods.