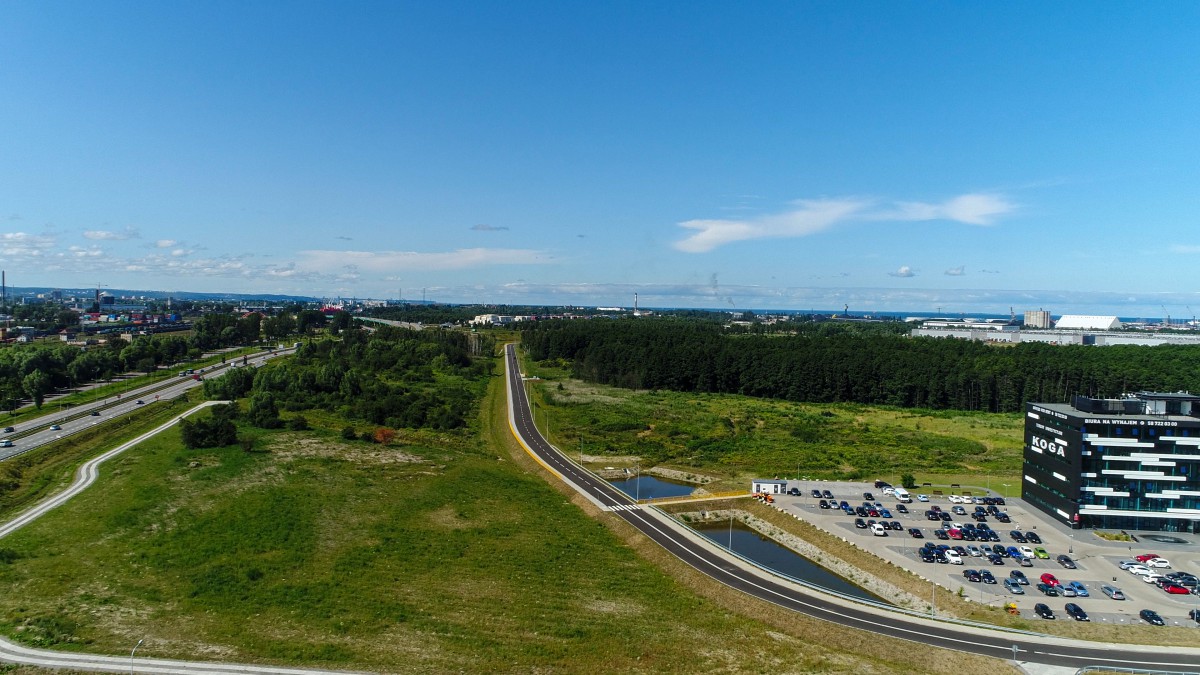 Seaports, Shipping, Logistics
InvestGDA: Development of further investment areas at the back of the Gdansk port (photo, video)

Modern, high-quality warehouse and production halls located in the city in the immediate vicinity of the port, airports with access to national and international roads are a great convenience for companies. They facilitate distribution, accelerate delivery and enable development. Due to the availability of such areas in Gdańsk, many serious investors have already decided to cooperate with the Gdańsk Economic Development Agency (InvestGDA).

InvestGDA deals with commercialization of investment areas as well as their sale and lease. One of the most attractive such areas is the Pomeranian Investment Center (PCI), located on the Sucharski Route near the Port of Gdansk and the DCT Container Terminal. Cooperation with the Gdańsk Economic Development Agency is possible in two ways: building your own plant or warehouse based on a long-term lease agreement or renting warehouses and storage yards, which InvestGDA will build, and which the company will then rent.

Thanks to the dynamically developing infrastructure of the Tri-City (Gdansk, Gdynia and Sopot) area, InvestGDA investment areas have access to national and international road, rail, air and sea connections. This is especially important in the era of Polish ports development.

Port of Gdansk closed first half of 2019 with a record result of 27.3 million tons of transhipped goods, achieving a 9% increase compared to the first six months of 2018. The development plans of the Port of Gdansk assume that the dynamics of transhipments will increase in the coming years even more particularly due to the construction of the Central Port, thanks to which the Polish port will be able to handle up to 100 million tonnes per year.

According to the final investment concept selected in May, the Central Port is to be a complex of six to eight terminals and deep-water quays for various purposes. Container, passenger, offshore, LNG and shipyard spaces are to be located on approximately 410 hectares.

The first terminals will be opened in 2029, enabling Gdańsk to receive the largest ships sailing on the world's seas and oceans.

The implementation of this investment is another step towards the transformation of the Port of Gdansk into the fifth generation port, a key communication node in the southern Baltic Sea and a port and sea trading center attracting investments that fuel the economy of the Pomeranian region and the country.

The immediate vicinity of the Port, including the DCT container terminal, stimulates the demand for warehouse space and affects the commercialization rate. The location at the back of such a dynamically developing industrial area also means financial benefits for customers in the form of reduction of handling, storage and transport costs.

Based on the available data, there is a gap in the availability of functions supporting the Port's operations, which are usually located in its immediate back (container depots, services accompanying the port's activity, including warehouses for packaging of imported goods, spaces for temporary storage of goods).

Considering the above conditions, as well as the needs of small and medium-sized enterprises, InvestGDA and the City of Gdańsk have been investing in the construction of linear infrastructure as well as strengthening, preparation and activation of subsequent investment areas at the back of the Port for several years.

The "Preparation of the Pomeranian Investment Center" project is currently under development.

As part of the investment, construction of warehouse halls offering Small Business Units (SBU) is planned, as well as storage yards. This offer is addressed to all companies, with particular emphasis on companies from the SME sector. The planned date of commissioning the investment is Q4 2020.

Many major companies have already become convinced about the attractiveness of the areas located in the Tri-City, such as Panattoni, 7R, Goodman, Segro and Schenker.

As Ryszard Gretkowski, vice president of 7R S.A .: told us: "Today, companies often compete for customers with the speed of delivery. The winner is the one who is closer and is able to deliver the ordered products faster. 18 thousand warehouse sq m, like all previous buildings in Gdańsk - Kowale, was fully rented shortly after the construction was completed, which once again showed that this location is particularly attractive for tenants. "

Goodman Polska is one of the best known logistics developers who took advantage of the InvestGDA area offer. This is one of the leaders in building and managing high quality logistics properties. His key investment in Pomerania is the Pomeranian Logistics Center - the largest logistics center in Poland in terms of the planned warehouse space, which currently has over 100,000 square meters of warehouse space in Gdansk (another 25,000 m3 is under construction).

Companies that cooperate with the Gdańsk Economic Development Agency receive comprehensive support, from assistance in obtaining construction permits or approvals to the involvement of engineers who cooperate with InvestGDA.

InvestGda also offers companies new investment areas at Benzynowa Street in the vicinity of Lotos and in the area of Elblaska Street. They are well located and give the opportunity to build industrial plants and remain in close proximity to the developing Port.