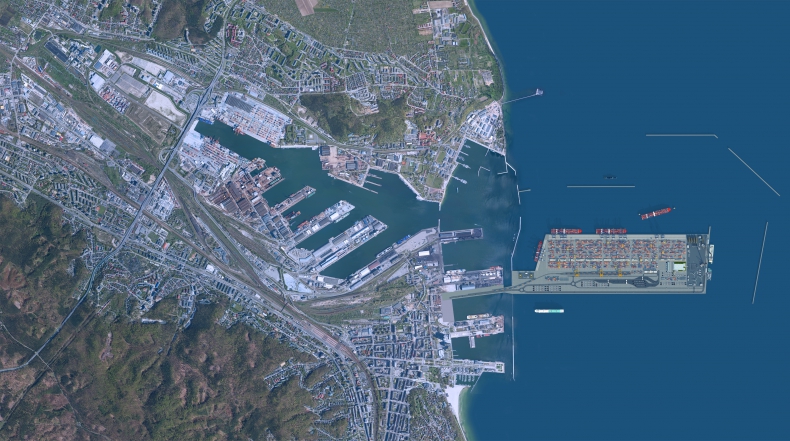 Seaports, Shipping, Logistics
Key chapter of the “Outer Port in the Port of Gdynia” investment

The Port of Gdynia Authority S.A. has formally launched a procedure to select a private partner for the “Construction of the Outer Port in the Port of Gdynia” project. The procedure is conducted in the form of a competitive dialogue – the most optimal form of conducting an order provided for in the Public Procurement Law and Public-Private Partnership Act, for large infrastructure projects.

The launch of the competitive dialogue is one of the key milestones of the Outer Port in the Port of Gdynia project.

With the publication of the announcement, an important stage of work in the economic, financial, legal and technical area was completed by a transaction advisor, which is a consortium of companies:

The deadline for submitting applications for admission to the qualification procedure is scheduled for 15 January 2021.

It is extremely important that the Outer Port project is currently the only one on the market to receive funding for the construction of access infrastructure in the form of the necessary breakwaters. In addition, PKP PLK's current investment in Gdynia Port station, worth PLN 1.53 billion, has a track reserve for the needs of the Outer Port. The modernisation of line 201, which provides the Outer Port with a collision-free connection to the south of Poland and Europe, is also in progress.

This is a very important project for the PPP market. The implementation of this investment in the form of a public-private partnership shows that today, in times that are not the easiest for the economy, we are effectively using various sources of financing for public investment. Despite the pandemic, we are not slowing down and the procedure for selecting a private partner was announced in accordance with the announced deadline Waldemar Buda, Deputy Minister for Funds and Regional Policy, Government Plenipotentiary for Public-Private Partnership.

At the same time, the Management Board of the Company is in the final stage of agreeing with the city of Gdynia the details regarding the Droga Czerwona [Red Road]. This investment has provisions in the act as to the precise amounts allocated for the road construction from the state budget year to year.

All this makes the interest in the project very high.

The steady increase in transhipments and good forecasts for the coming years are a strong argument for developing the Port of Gdynia. Over the last 3 years, investments made or commenced in the Port of Gdynia amount to over PLN 1 billion. The Outer Port is a strategic investment, which is under construction. We want to continue the vision of Eng. Tadeusz Wenda and Eugeniusz Kwiatkowski, so that the Port of Gdynia can be a generator of economic development of the country for the next decades, says Adam Meller – President of the Port of Gdynia Authority S.A.

In the case of such investments, cooperation between the Port of Gdynia Authority S.A., whose role is to create appropriate conditions for road and rail access to the port, and the private partner ensuring the success of the entire project, is crucial. A private partner must be a world-class operator able to attract cargo to the Port of Gdynia – Maciej Ziomek, Associate Partner at EY Transaction Advisory Services Transport & Infrastructure Sectors Leader

The Outer Port is a strategic investment of the Port of Gdynia. The project, as a priority task of the Port of Gdynia Authority S.A., has received the approval of the Government of the Republic of Poland and has been included in the governmental draft Programme for the Development of Polish Seaports until 2020 (with an outlook to 2030). The deepwater Outer Port will be built on the base of the existing Nabrzeże Śląskie [Silesian Quay] – on artificial land extending beyond the current protective breakwater. Its construction has become a necessity in the face of growing market competition and forecasts of the demand for container transhipment in Polish seaports, which is expected to grow to around 9.5 million TEU in 2050. The Outer Port, as a jetty constituting a landed sea area, increasing the port area by 151 ha and the transhipment capacity by 2.5 million TEU.

The construction of the Outer Port will have a positive impact on the development of the labour market in Gdynia, directly generating about 700 jobs in the Outer Port itself and over 4,200 in the surrounding industry.


The Port of Gdynia is an important link in the Trans-European Baltic Adriatic Corridor, which plays
a very important role as one of the most important development levers for Central Europe. This corridor is approximately 2,400 km long and connects key transport regions from Poland, the Czech Republic, Slovakia, Austria, Slovenia and Italy, which are also links in the Three Seas Initiative.