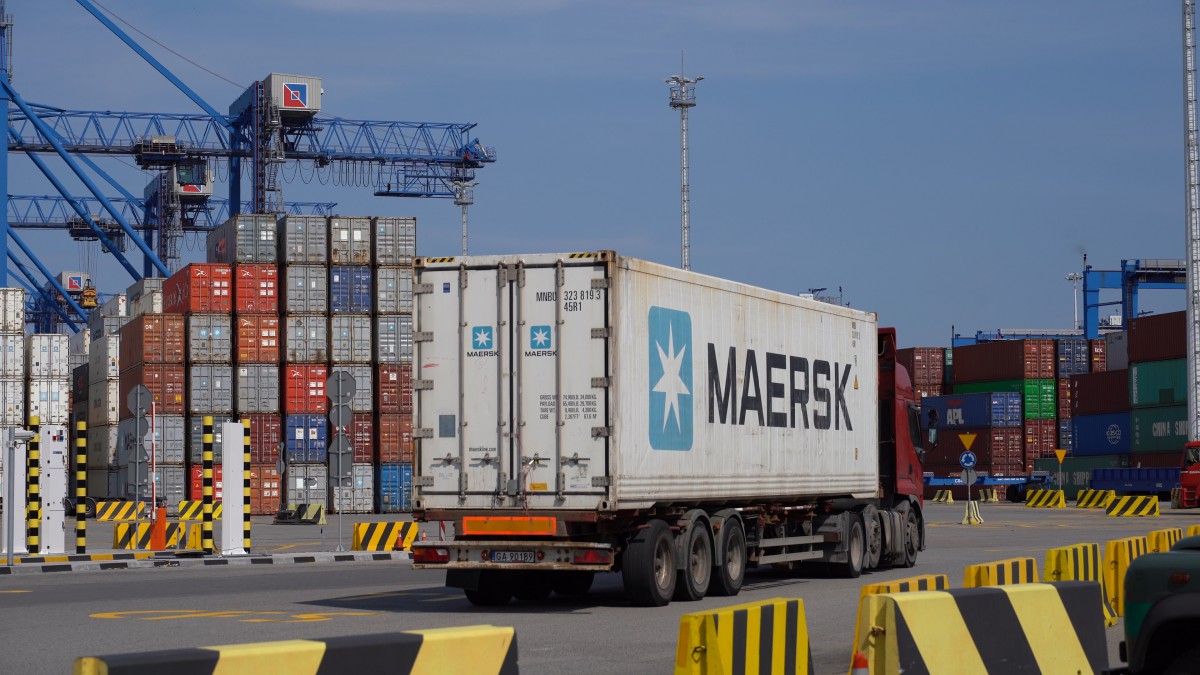 Maersk has launched a new AE19 ship-train-ship service from the Far East to Gdansk. Its inauguration took place on Wednesday at the DCT Gdansk container terminal. Thanks to the intercontinental train, transit time from Asia to Poland will be twice as fast. The connection will complement existing services based only on the ocean product.

- Today we have finalized pilot transport from Busan in South Korea, to Gdansk and transported containers within 18 days. This service is relatively simple. It is constructed of three basic branches: the first is the "sea leg" in Asia, the second is the "land leg" from Vostoczno in Russia to St. Petersburg in Russia, and then the sea route from St. Petersburg to Gdansk - explains Tomasz Zwiercan, managing director of Maersk in Poland.

He added that the basic and key benefit of this service is very fast transit time, which, compared to traditionally sea transport, is halved in most cases.

- This service will be very flexible, because like all other Maersk maritime services, this one will be made based on our standard transport documents, sea bills of lading, despite the fact that land transport is a large part of it - says Zwiercan.


The journey of the intercontinental container train from Asian locations through Russia takes 9 days. Then, after 2 days short sea service, containers are delivered to DCT Gdansk. The first of them, intended exclusively for the Polish market, arrived there on container ship Calisto. The vessel is 167.98 m long, 25.73 m wide and has capacity of 1 574 TEU. Built in 2005, the ship sails under the Liberian flag.

- This is a great example of rail and sea transport synergy that bring benefits to the port. We have often wondered if trains will take goods transported from China from shipping lines and ports. The new service shows that it doesn't have to be this way. On the contrary, it's added value, increasing volumes and connections. We are very happy that we can be part of the new opportunity - says Cameron Thorpe, president of DCT Gdańsk.

He added that over 1.9 million TEU was transshipped at DCT Gdańsk last year. This years' result is expected to reach about 2 million TEU. He emphasized that strong growth is observed in Poland and neighboring markets, which is why DCT Gdansk will be a new hub and logistics center for the entire region.

DCT Gdańsk is currently implementing the T2B program, which will improve, among others quality of terminal customer service. In the middle of next year it will have fourteen STS cranes at the wharves with a total length of 1,300 m. Intensive work is also underway there to improve road and rail access to the terminal. Part of the existing infrastructure in the truck parking lot is also being rebuilt and arranged. It will be adapted to the needs of the newly implemented Gateway Optimization System. These will be fully automated gates that use OCR (optical character recognition) cameras to register trucks and containers that will arrive in Gdansk in accordance with prior booking in the e-Gate notification system.

At the end of last year, the first stage of expansion and reconstruction of the existing railway siding began at DCT Gdańsk.

Weekly service in the beginning

The transport time on the AE19 service from Busan to Gdańsk is 18 days. Return trip takes 22 days.

- Gdańsk will be entry point, but we are thinking about getting these goods not only to Poland, but also to the Czech Republic and Slovakia. We intend to maintain this service in the first weekly cycle in the first period of operation, but of course as the interest of our clients increases, the frequency will increase - says Zwiercan.

He informed that both in Asia and in the European part of the Baltic Sea, the goods will be transported by delivery vessels, i.e. smaller units that support the Saint Petersburg-Gdańsk connection in the case of the Baltic Sea. The advantage of the new service is the transit time and frequency that Maersk is able to provide.

- Compared to sea transport or intercontinental rail transport, we have a chance to handle large streams of goods  - emphasized Zwiercan.

He added that the AE19 service for dry and refrigerated cargo in containers was launched because Maersk customers expected it.

Sealand Asia, a Maersk Group company, will provide sea transport services from the Far East to the Russian port of Vostoczny. Sealand Europe will be responsible for maritime transport in the Baltic Sea. Customs formalities related to rail transit will be handled by one of the largest private rail operators in Russia - the Modul company. Containers will be loaded and unloaded at terminals belonging to Global Ports - the largest Russian port operator. These will be the VSC terminals at the Vostoczny Port and PLP in St. Petersburg.

Maersk plans to expand service to Japan and other Asian countries. Ships from St. Petersburg will be able to transport goods not only to DCT Gdansk, but also to Bremerhaven in Germany as well as to Scandinavian and Baltic ports. It will shorten the transport time compared to exclusively ocean-based services and ensure cost competitiveness in comparison to air freight.