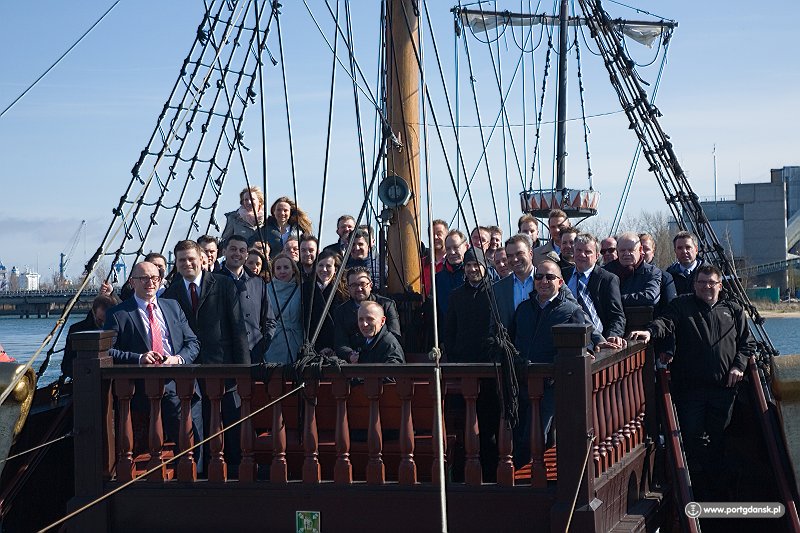 On 14 April, a meeting of representatives of the Association of European Vehicle Logistics (ECG), established in 1997 and currently bringing together 100 leading logistics companies from the automotive sector from 27 European countries, took place in Gdansk.

Active members of the Association also include long-term partners of the Port of Gdansk - Adampol and BLG Autoterminal Gdansk, companies specialising in freight forwarding of vehicles in Europe. Euro Marine Logistics, providing regular short sea shipping services for new cars to/from Gdansk, is also one of the members.

As part of the visit, the potential of Gdansk's port complex was presented to the guests from the water - including the potential of the quays currently used to handle new vehicles. The specificity of the port's activity and its individual terminals, both the deepwater ones and those located in the Inner Port, was also discussed.

During the second part of the visit, the representatives of the Association listened to a presentation by Julian Skelnik - Director of International Relations and PR, who presented the port's location-related advantages, its deepwater character and excellent transport connections with the base, undoubtedly constituting a great asset, particularly from the point of view of logistics, including logistics directly concerning the automotive sector.

The ECG Association is an extremely important organisation in the automotive market, aggregating a huge logistic potential of this industry through its members. As of today, the turnover generated by the members of the Association amounts to approx. EUR 22 million. In total, ECG member companies have a fleet of as many as 400 ships designed to carry vehicles, 18,000 railway carriages for the transport of cars, 80 specialist barges, and 18,000 car carrier trailers.

The Association's visit to Gdansk and the opportunity to present the port, and above all its role as an international communication hub for transport along the routes of North-South and East-West of Europe, was of great significance, also for the future. As a reminder, in its development strategy, Gdansk included an increase in the importance of the port in the context of transit handling mainly for countries from the Southern, but also South-Eastern European base. Bearing in mind that these European locations are now considered some of the most thriving and most frequently selected areas by investors when it comes to the production of passenger cars in Europe, the dimension of the Association's visit to the Port of Gdansk was all the greater.