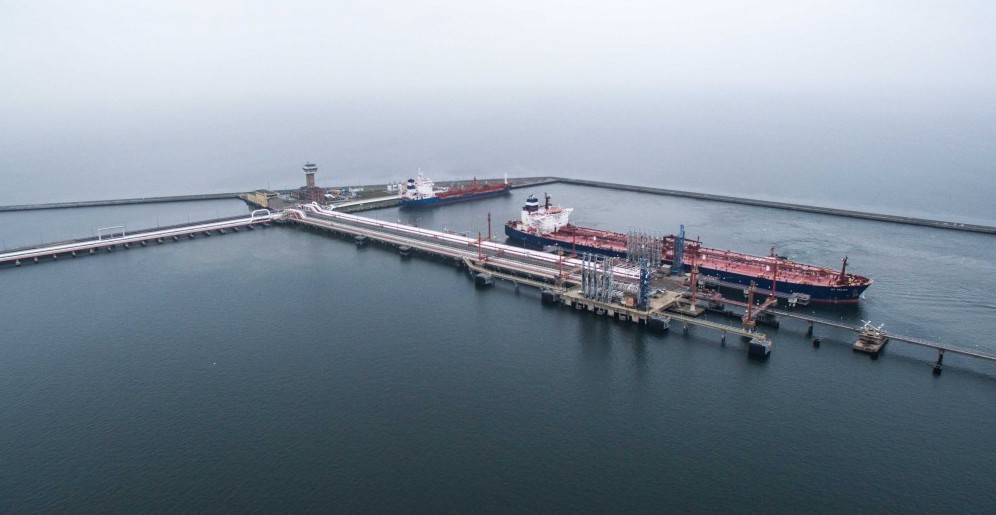 In the first half of the year, 8.3 million tons of crude oil was delivered to Naftoport, part of PERN Group. It's about 30 percent. more than in the same period a year earlier - said PERN. Company assessed that Naftoport confirmed its strategic importance, especially during problems with contaminated oil in the Druzhba pipeline.

"The Polish crude oil logistics has passed a test related to contaminated raw crude, which entered Poland through the pipeline ”Druzhba” in the second half of April this year," PERN stressed in its Tuesday statement.

“Naftoport has collected twice as much oil from the sea shipments than usual," PERN stressed. As he stated, "in total in the first half of 2019, the company collected 8.3 million tons of crude oil, a nearly 30 percent. more than in the same period last year, which in terms of the volume of transshipments has been record-breaking in the history of Naftoport."

PERN reminded that "in the second half of April, organic crude oil contaminated with organic chlorides hit the Polish pipeline system. That was very dangerous for sensitive refining systems." He also mentioned that on 24 April, at the request of clients, he stopped activity of the Druzhba pipeline. Partial operation was resumed after 46 days. "At that time, PERN was constantly servicing the refineries by transferring the raw material from stock and delivered by sea imports via Naftoport. Customers was not affected by this situation - the company emphasized.

The CEO of PERN, Igor Wasilewski, pointed out that Polish refineries "have been increasingly diversifying their portfolio in terms of sources of oil supplies for several years." "We have seen in recent months that we need that diversity. The test was successful because customers at stations have not experienced problems with deliveries of raw material to the country, "said Wasilewski, quoted in the company's Tuesday statement. He added: "We are on the right track when it comes to building energy independence in the area of oil and fuels."

According to PERN, in May this year, Naftoport transshipped 2.2 million tons of crude oil. Before that company has reloaded about 1 millions tons monthly on average. The company calculated that "Naftoport serviced 13 more tankers than at the same time a year earlier" - in total there were 51 of them.

At the same time PERN emphasized that Naftoport transshipped almost 15 million tonnes of oil and fuels in 2018, serving 314 tankers at that time, of which one third were tankers exceeding 80,000. tons of carrying capacity. "Taking into account market trends and challenges in the energy sector, as well as governmental policy for the oil sector, PERN has launched a number of investment projects," the company said.

Among its strategic investments, company mentioned construction of a "second raw material pipeline from the Baltic Sea port to the center of Poland". "This will deepen the diversification and full quality separation of new types of oil for PERN's customers" - explained the company.

PERN informed that "it is expanding oil storage tanks" - it concerns about 7 new tanks in its facilities, Oil Terminal in Gdansk (TNG) and in the Gdansk storage base. "In total, the storage capacity for crude oil will increase by almost 600,000. cubic meters to the level of 4.1 million cubic meters. Both the construction of new crude oil tanks in the Gdańsk base and in TNG has already begun "- noted the company.

PERN is a strategic part of Poland's energy security, Company manages storage facilities for crude oil with a total capacity of approx. 3.5 million cubic meters. and a network of over 2.6 thousand. km of oil and fuel pipelines. The company is pumping crude oil from Russia to domestic refineries: PKN Orlen in Płock and Grupa Lotos in Gdańsk, as well as two refineries in Germany. It also transports raw material delivered by sea to Gdańsk Naftoport.

As a result of the merger with OLPP finalized in early 2018 - previously a company from its capital group, which was Poland's largest storage and handling entity for liquid fuels - PERN took over 19 warehouse bases with a total capacity of approximately 1.8 million cubic meters.