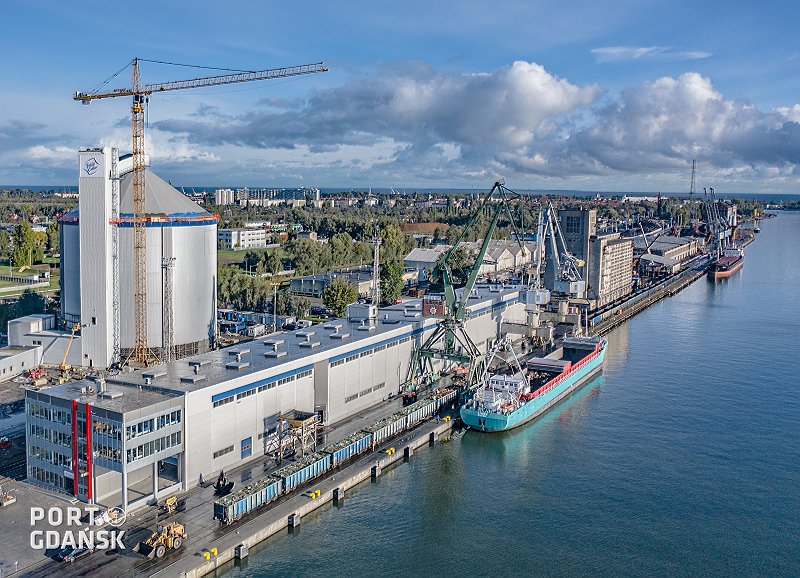 KSC S.A. invested over PLN 100 mio. to develop the Sugar Terminal, the silo and quay infrastructure. This move will help the Company reach new markets in Asia and Africa. Krajowa Spolka Cukrowa plans to ship 300,000 tons of sugar over its terminal in the coming years. A few dozen jobs will be created in the Tricity as a result of the project.

EnlargeOn 10 October, Krajowa Spolka Cukrowa S.A. opened its Sugar Terminal in the Port of Gdansk. The facility is located at the quay, in direct vicinity of the Martwa Wisla river, which ensures passage and loading of high-tonnage vessels.

The entire project covers a handling and shipping terminal, comprising:


EnlargeThe opening of the Sugar Terminal reasserts the Port's readiness to respond to customer needs. We are happy to cooperate with Krajowa Spolka Cukrowa, the largest sugar market player. KSC's decision to choose the Port of Gdansk as the site of its project proves right our Port development strategy based on establishing strategic alliances with leaders from the respective industries, and validates the claim that the Port of Gdansk is a safe and promising location to develop business operations - says Lukasz Greinke - President of the Management Board of the Port of Gdansk Authority SA.

The entire project enables sugar unloading from rail cars and silo trucks. Modern handling and shipping facilities provide for sugar shipping in polypropylene bags, stacked both in containers and cargo decks of conventional ships. Circulation yards, car parks for trucks and passenger cars are being developed at the Terminal, to be followed by railway track rehabilitation.

EnlargeThe Sugar Terminal enables us to export by sea at least 300,000 tonnes of sugar per year. Our own Terminal eliminates the requirement to hire storage space at third-party warehouses, which will cut down our costs significantly - says Krzysztof Kowa, President of the Management Board of Krajowa Spolka Cukrowa S.A.
Krajowa Spolka Cukrowa S.A. seeks not only to maintain its current domestic and global customer base, but also to acquire new customers, previously difficult to reach due to sea shipping constraints.

In the years to come, Krajowa Spolka Cukrowa S.A. plans to manufacture one million tonne of sugar per year, approximately 30% of which will be exports outside the European Union. The Sugar Terminal is a major step in the development of KSC S.A. Sugar consumption has remained stable in Europe for many years. To be competitive on the market where sugar consumption is growing, notably in Asia and Africa, we need our own handling terminal - notes Krzysztof Kowa, President of the Management Board of Krajowa Spolka Cukrowa.

The agreement on the property lease for the development of the handling and shipping terminal, including access infrastructure to support sugar transport, was signed by Krajowa Spolka Cukrowa S.A. and the Port of Gdansk Authority SA in November 2017. The development work started in April 2018 and was carried out by T I Construction Sp. z o.o., supervised by KSC S.A. staff. The Terminal development cost will exceed PLN 100 mio. KSC S.A. will employ a few dozen new staff members for the Terminal, such as warehouse and forklift truck operators and logistics staff.

Krajowa Spolka Cukrowa S.A. was established in August 2002 and is currently Poland's largest and one of Europe's major beet sugar manufacturers. The majority stake in KSC S.A. is held by the State Treasury, and an over 20% stake by sugar beet farmers and employees. The group comprises 7 sugar processing facilities (Dobrzelin, Kluczewo, Krasnystaw, Kruszwica, Malbork, Naklo, Werbkowice) and a fruit and vegetables processing facility Zaklad Przetworstwa Owocowo-Warzywnego "Polskie Przetwory" of Wloclawek. The sugar processing facilities located in five provinces annually process some 6 mio. tonnes of sugar beet farmed over 100,000 hectares, and supplied by some 15,000 farmers. The Company manufactured in total over 910,000 tonnes of sugar in the 2018/2019 campaign. This performance is second to none in the company's history. Krajowa Spolka Cukrowa S.A. is primarily involved in the production and sale of sugar, trading in sugar processing products and fruit and vegetables processing.

Customers for the Company's products under the brand name "Polski Cukier" are both Polish businesses and renown international groups. The Krajowa Spolka Cukrowa Group, developed for years, today operates in five agricultural and food processing market sectors. The primary sector of the Group remains sugar processing. Four other include the confectionery industry, fruit and vegetables processing, grain and milling and potato industry. Next to KSC S.A. the KSC S.A. Group owns four manufacturing subsidiaries: