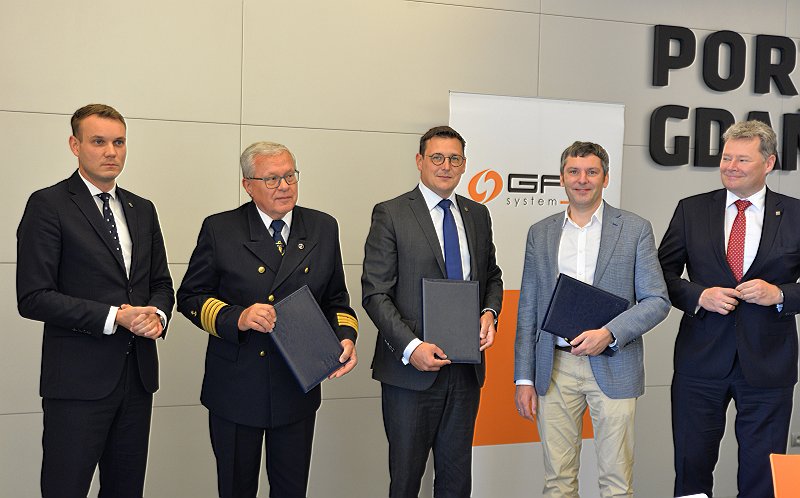 Seaports, Shipping, Logistics
One step closer to establishing the FSRU terminal in the Bay of Gdansk

Representatives of GAZ-SYSTEM, the Port of Gdansk Authority and the Maritime Office in Gdynia signed a letter of intent regarding cooperation in the construction of a floating storage and regasification unit (FSRU) terminal at the Port of Gdansk.

The document specifies the role of each party in the LNG FSRU terminal construction programme. It also includes a list of projects necessary for its implementation. The letter of intent will serve as a basis for a separate agreement, where each stakeholder will define the terms and scope of their cooperation.

"We are happy that Gaz-System has chosen our port as the best location for the construction of the terminal. This will have a direct impact on increasing the number of transshipment operations within the port. Moreover, it will pave the way to handling a completely new cargo group, that of natural gas. It is also going to be a great opportunity for entities in the region, which will be able to source the raw material for their own processes through our port. The greatest advantage of the project is efficiency, because regasification of 1 m3 of LNG creates 600 m3 of gaseous product. Our joint investment, involving not only the Port and Gaz System but also the Maritime Office in Gdynia, will contribute to the energy independence of our country. It should also be added that in our region, this type of regasification unit, called 'Independence' has been already successfully used since 2014 by Lithuanians at the Port of Klaip da," says Lukasz Greinke, President of the Port of Gdansk.

"The construction of a floating LNG terminal within the Bay of Gdansk has long been discussed. It is also part of the spatial development plans for the waters of the Port of Gdansk, which are currently being processed by the Maritime Office in Gdynia. The functions of the hydrotechnical facilities, such as the currently being modernised and newly built protective breakwaters in the Northern Port, are not strictly limited to safety of navigation. Such structures will also facilitate the implementation of the planned undertaking," says Wieslaw Piotrzkowski, Master Mariner, Director of the Maritime Office in Gdynia.

The FSRU (Floating Storage Regasification Unit) is essentially a floating tanker equipped with liquefied natural gas (LNG) regasification equipment. The unit will be based in the Bay of Gdansk. Currently both the market research and business parameter analyses for the planned investment project are underway. GAZ-SYSTEM's current plans assume the construction at the port of a unit having an annual capacity of 4.5 bcm.

The construction of the FSRU terminal as a new entry point to the national transmission system is a response to the increasing demand for natural gas. As a result, the possibilities of importing gas into the Polish market will be boosted. This will translate into the development of the LNG market in our part of the European continent, and will also contribute to Poland's energy security.

Locating the FSRU unit in the Bay of Gdansk will reinforce the significance of this part of the coast on the economic map of the Baltic Sea, including through the possibility of direct bunkering (refuelling of LNG ships). Importantly, access to a low-emission gas fuel for the maritime fleet will have a positive impact on the natural environment.

In 2020 the construction of the FSRU terminal was added to the fourth list of investment projects with the status of Projects of Common Interest (PCIs) in the energy sector. PCIs are key infrastructure projects aimed at increasing the level of security on the European energy market. Their implementation is intended to support the energy policy and tackle climate challenges in the EU.