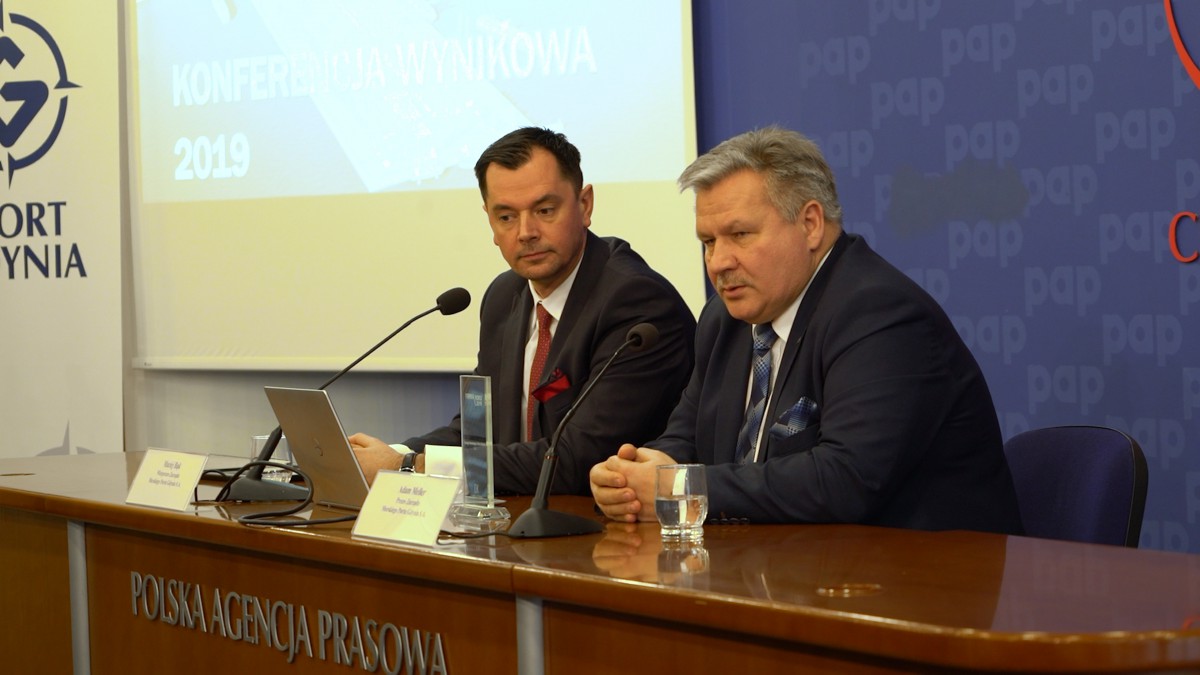 Last year, the port of Gdynia earned profit of PLN 54 million, with revenues reaching PLN 237 million, according to preliminary financial data. They added that 24 million tons of goods were transhipped at the port at that time.

- We started and ended this year with record results. The longest container ship docked at the Port of Gdynia - mv "Charlotte Maersk", which moored at the BCT terminal in February 2019. We also managed to beat the transshipment result from 2018 by almost half a million tons, which indicates a favorable economic situation in maritime transport - says Adam Meller, President of the Board of the Port of Gdynia Authority S.A.

The container ship entered the port and moored precisely thanks to the RTK system. The Port of Gdynia is one of only two ports in the world using RTK corrections for navigation purposes, in accordance with the requirements of international IMO standards and IALA recommendations.

In 2019, the Port of Gdynia commissioned the first of four high storage warehouses. The modern warehouse is one of the key elements of the Intermodal Logistics Center in the Western Port. Bearing in mind the ever-growing market requirements, especially in the area of logistics and warehouse facilities, the Port of Gdynia Authority manages to expand the offer of storage yards and storage rooms. This is the first of four warehouses of this type planned at the Port of Gdynia, which already found a tenant at the time of the investment. The next facility is currently in the advanced design phase.

- Everything is going according to Port of Gdynia strategy. We are taking into account key areas with respect for the natural environment, from safety to the strategic project of the port's departure into the sea, i.e. the construction of the Outer Port - adds Adam Meller.

At the beginning of August 2019 the special act was implemented. It introduced facilitations enabling efficient implementation of sea port expansion projects. It concerns the ports marked as important for the Polish national economy. The act will support the full use of the transhipment potential of the Port of Gdynia.

In addition to favorable legislative changes, the port also took advantage or the EU funds. The port investments are supported by consistently obtained funds from the Cohesion Fund under the Infrastructure and Environment Operational Program. The Port of Gdynia is implementing one of the key investments thanks to which it will be possible to operate large ferries with a length of up to approx. 240 m, as well as increasing the frequency of their calling. The construction of the New Public Ferry Terminal results from the growing passenger traffic and trade exchange with Scandinavia. New location — next to the Pool Marshal Piłsudski - will ensure connection with the most important local and national roads constituting an important element of trade.

From 2021 it will be possible to supply ships with electricity at the Ferry Terminal at the Port of Gdynia, which will eliminate exhaust emissions during standstill. This activity clearly indicates that the Port of Gdynia is aiming to become a "greenport".

In addition to the transhipment record, the Port of Gdynia achieved very good financial results. Total revenues of ZMPG-a S.A. increased in 2019 by 5.2% to over PLN 237 million. It was mostly thanks to growing sales (by 2.3% in 2019) which reached a record level (PLN 195 million). This was due to the increase in rental income, which was primarily the result of the purchase of new port areas in 2018. Due to the increase in operating costs, including depreciation and labor costs, net profit was lower than in the previous year and amounted to nearly PLN 54 million.

Funds generated from the basic activity of PGA S.A. (illustrated by PLN 98 million EBITDA in 2019), increased by funds from financial activities and supplemented by EU funds, are the main source of financing the modernization and development program of the Port of Gdynia.