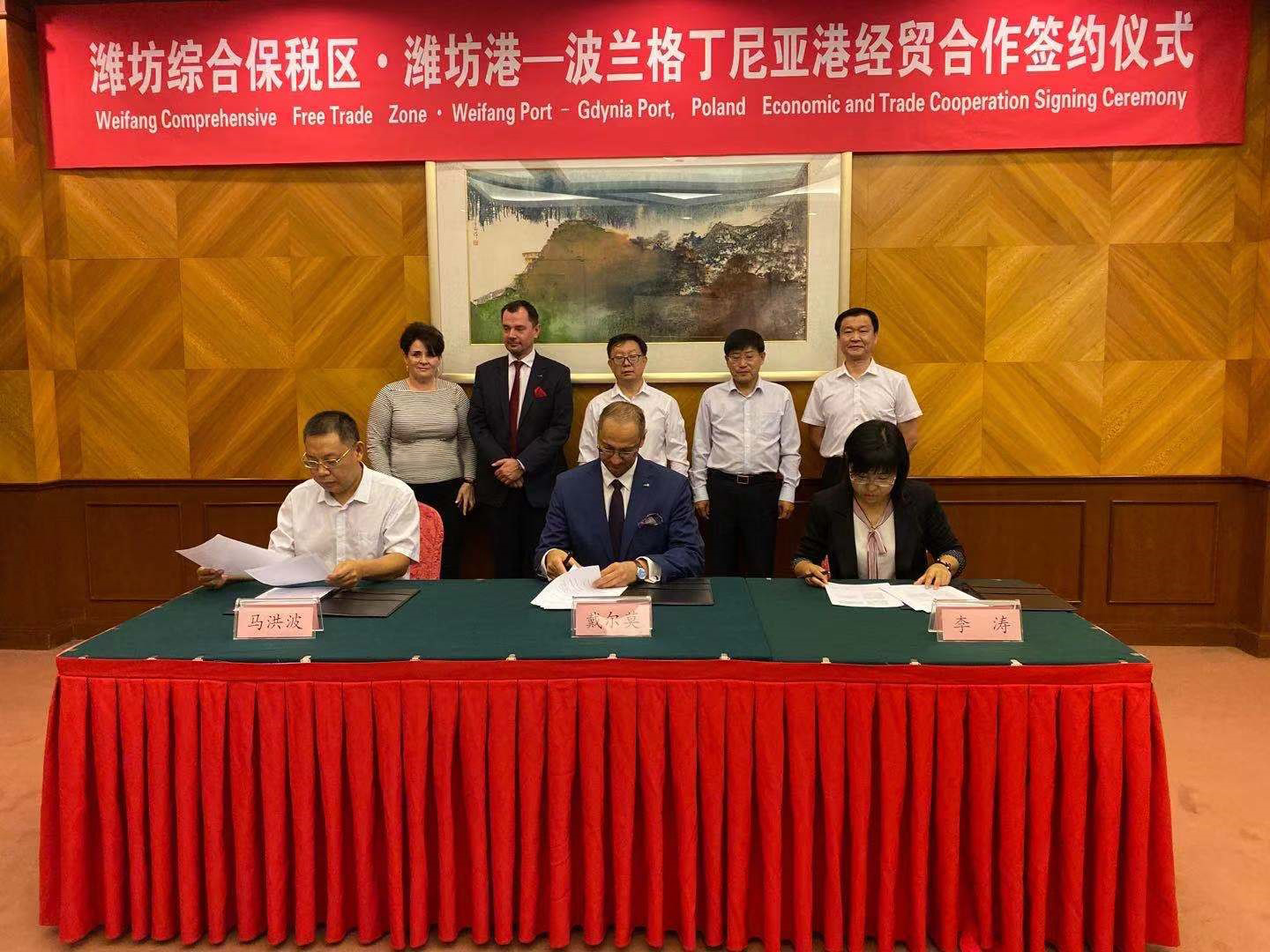 The development of the New Silk Road and transportation in the Three Seas Initiative area is an opportunity for Poland to become a hub for freight transport in the region, which is significant for the activities undertaken by the Port of Gdynia Authorities.

The ongoing Port of Gdynia Authority S.A. visit in China is held with purpose of keeping up the good relationship and contacts established during the last visit. Mutual understanding and common priorities in the implementation of strategic business goals are essential aspects for establishing even closer cooperation. The ceremonial signing of a letter of intent between the ports of Gdynia and Weifang is the best proof of a mutual desire to keep the good cooperation in the area of best commercial practices, which in consequence are supposed to strengthen the competitiveness of both ports.

In the presence of Wang Fu - Director of the Ministry of Trade in Weifang, Chen Honggang - Vice-Director representing the Ministry of Maritime Economy in Weifang, Yuan Guoming - Director of the Free Zone in Weifang, a letter of intent was officially signed to increase cargo flows and exchanging thr experience between Weifang Port Group co Ltd. and the Port of Gdynia. The Port of Gdynia Authority was represented by: Maciej Bąk - Vice President for finance and Grzegorz Dyrmo – Vice President of Infrastructure, from the other party the document was signed by Mr. Ji JianYong - President of the Port in Weifang.

- Cooperation between the ports of Gdynia and Weifang is an important element of Poland's ongoing economic integration with the Chinese market and it is another step to improve transport from China, says Adam Meller - President of the Port of Gdynia Authority S.A.

- Business is all about time and measurable effects. I am glad that our commitment and the time we have spent working on our relationships with our Chinese partner has resulted in a valuable agreement on numerous benefits for the Port of Gdynia - adds Adam Meller.

Poland is one of the key partners in the development of the New Silk Road - primarily due to the strategic location between China and Western Europe. Polish sea ports can also benefit a lot when creating the New Silk Road, i.e. the development of a transport network from China to Europe. In this project the so-called intermodal ports, integrating several types of transport, eg by sea and rail, where goods 'travel' without transhipment. The Port of Gdynia, constantly developing its logistics facilities such as roads, railway and warehouse infrastructure, is increasingly becoming the Chinese favorite for freight transport to Europe.

- The signed letter of intent is the part of the Strategy of the Port of Gdynia being a part of the European logistics center, aiming to build the most effective international cooperation network - comments Maciej Bąk - Vice President of the ZMPG.

An important element of the established cooperation is also the possibility for the Port Gdynia to establish its office in Weifang, thanks to which international trade activities will become even more effective.

- We plan to exchange knowledge about planned infrastructure investments and implemented technology solutions with our Chinese partner. Our ports also begin the cooperation with the aim of promoting and increasing the range of services offered to contractors, says Grzegorz Dyrmo - Vice President of the Port of Gdynia Authority S.A.