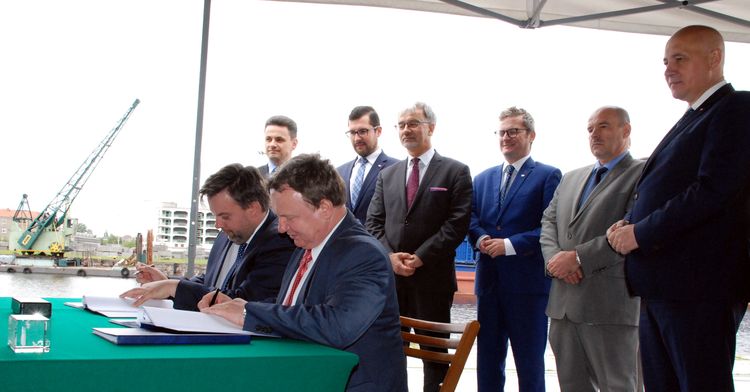 On 4th July this year, in the Szczecin Seaport, a contract was signed for the project of ‘Improving the railway access to seaports of Szczecin and Świnoujście’. It is a very important project for the Szczecin-Świnoujście port complex, since it is expected to improve railway accessibility of the two ports.

The importance of the event was highlighted by the presence of Joachim Brudziński, the Deputy Speaker of the Polish Parliament, Jerzy Kwieciński, the Secretary of State at the Ministry of Development, Krzysztof Kozłowski, the Governor of Western Pomerania Province, Marcin Pawlicki, the Deputy mayor of the city, Przemysław Gorgol, the Director of EU Transport Projects Centre, Izabela Baraniak, the project manager at the EU Transport Projects Centre, Ireneusz Merchel, President of Board at PKP Polskie Linie Kolejowe S.A., and  Włodzimierz Żmuda, Member of Board and Director for Development and Investment at PKP Polskie Linie Kolejowe S.A.. Dariusz Słaboszewski, the President of Board at the Szczecin and Świnoujście Seaports Authority, welcomed guests at the event.

One of factors decisive regarding the competitiveness of ports is their accessibility from the hinterland. For this reason, investment improving access infrastructure, including road and rail, is particularly important for the port. Today, the rail transport accounts for 34% of cargo handled in the ports of Szczecin and Świnoujście. Rail transports mainly bulk cargo, such as coal (33%), ore (26%) and general cargo (23%), e.g. cellulose.

The objective of the project of ‘Improving the railway access to seaports of Szczecin and Świnoujście’ is primarily the elimination of bottlenecks, increasing capacity of railway lines, shortening the inbound and outbound traveling times, as well as ensuring timely arrivals and departures. The project is expected to enhance the quality of services offered by the ports and better competitiveness of the Szczecin-Świnoujście ports complex on the sea shipping market. In Szczecin, the project includes the building of an overpass above Gdańska Street, rebuilding of a railway bridge on the Parnica River, electrification of the access to the Wrocław Park (shortening travelling time by as much as 2 hours), modernizing the railway system in the vicinity of the Wrocław Park (track, traffic control equipment) and a container terminal to provide a direct access using the electrical railway line, as well as modernizing a railway track between the Szczecin Port Centralny Station and quays in the area of bulk cargo handling (SpA, SpB and SpC).

In Świnoujście, the project will build the second track of 1.5km between Świnoujście SiA and Świnoujście SiB stations to improve traffic capacity between passenger and cargo stations and modernize railway infrastructure in the area of the cargo station of Świnoujście SIB (e.g. modernization of track and traffic control facilities) to reduce the railway cars handling time, as well as build track for reloading at the ferry terminal.