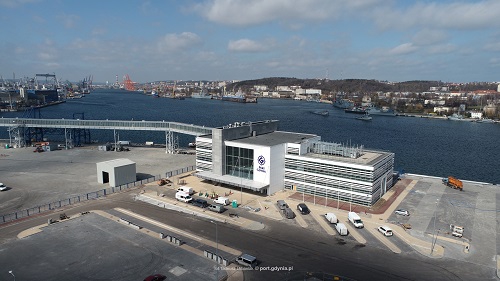 In June, new Public Ferry Terminal will be completed. It is another the investment of the Port of Gdynia Authority S.A.

- It is the largest project in last 50 years of Port of Gdynia, the general contractor of which is Korporacja Budowlana DORACO Sp. z o.o. The investment is carried out on an area of 6 hectares. The historic Polish Quay was demolished and in its place was put a complete new quay.

Thanks to this huge investment, which translates into the sustainable development of the port, transport accessibility from the sea will be increased, increasing the competitiveness of the port.

Not only ferries, such as Stena Line, but also other ferry operators will be able to use the investment. The Port of Gdynia will be able to accept vessels up to 240 m in length, i.e. with the target size of serviced ferries, related to the conditions of the Baltic market.

Both the Port of Gdynia and the city of Gdynia will benefit from the soon-to-open terminal. More passengers and tourists means increased development of local industries. New jobs will also be created, and the number of new services related to sea and land transport will increase.

An important aspect of the new Public Ferry Terminal will be the ability to power ferries while they are docked. This fits in with the idea of the so-called "Green port". This solution completely excludes the emission of exhaust fumes when the ferries stop at the quay. This is of great importance for the port of Gdynia, which is located in the vicinity of the city center, so air pollution would affect many Gdynia residents, and its center would lose its attractiveness.

OPS or onshore power supply, also known as cold ironing, is a system that is designed to provide electricity to a ship from land during its stay in the port.

Supplying ships with electricity while docking at the port has a very positive effect on the environment by: reducing the noise level in the port, almost completely reducing noise and vibration on the ship by switching off the engines, extending the life of auxiliary engines on the ship.

Research has shown that 10 hours of port power usage by a large cruise ship reduce CO₂ emissions by 22 tons, nitrogen oxides by 1.4 tons and sulfur oxides by 1.2 tons.

The shore-based electricity supply system for ships is based on a dedicated converter station in the form of a built-in container, a cable line along the Polish Quay, in a cable channel, cable sockets located in three places on the wharf and a mobile crane (a device that will move along the quay and fed a cable with a "socket" to the ship).

- Kalskrona, Goteborg and Stockholm have this type of system (from December 2020). Historically, the first port to install a shore-based power supply system was the American Port of Los Angeles in June 2004, and the first ship to benefit from it was the Japanese container ship NYK Atlas, adds Capt. with. v. Mieczysław Amielańczyk, who sailed as a senior officer on passenger ships: Albatros, Minerva and Explorer, and earlier - as the 2nd officer on Stefan Batory. He also served as a captain on the casino ship The Mercury, sailing in the Singapore region and the Malacca Strait.

On the other hand, it is the first system of this type in Poland, so it is undoubtedly innovative and avant-garde. This investment will certainly determine the way of implementing this type of installation in Polish ports. It increases the standard of ship service and allows for the connection of ships mooring to the quay based on modern infrastructure.

- A thriving business combined with care for the environment is a modern standard that attracts more customers. When implementing strategic investments, we cannot forget about the surrounding environment. The construction of the Public Terminal in Gdynia is a large-scale undertaking that we implement as part of sustainable development - comments Adam Meller, President of the Port of Gdynia Authority S.A.

The capacity of connection for ships is 3.5 MW, which means the ability to quickly "charge" the batteries of a given ferry, without the need to turn on diesel engines, which are certainly not ecological and therefore limiting their role becomes the goal of a number of pro-ecological activities in many areas economies. The system is designed to supply ships with an 11kV 50Hz / 60Hz on-board installation from the 15kV 50Hz coastal power grid.

It is also worth emphasizing that vessels powered only by electric motors can be powered from such a connection. Thanks to the described system, the Port of Gdynia will be able to handle ships of this type since September.

- An interesting fact is that the container device - a connection (converter) station — due to the search for optimal solutions in the field of land development organization — was located just below the inrun flyover — says Karol Zduńczyk, President of the Management Board of Korporacja Budowlana DORACO, the general contractor of the investment — The size of this the container and the height of the place under the flyover gave us only about 50 cm of clearance, which excluded the possibility of placing a container weighing almost 30 tons with the help of a crane. This station was therefore "slid in" using the sliding rails and actuators which positioned the device at its final location.

The Port of Gdynia is the base node of the TEN-T trans-European network and a category A port. It is one of the two Polish seaports is the Gdynia-Karlskrona Sea Motorway connected to Sweden. The location of the Public Ferry Terminal at the Polish Quay will ensure connection with the most important local and national roads, which are an important element of the international trade corridor. The first call of ships at the new terminal is planned already in September this year, and the value of the investment is approximately PLN 292 million, of which funding from the European Union is PLN 116,837,137.67.