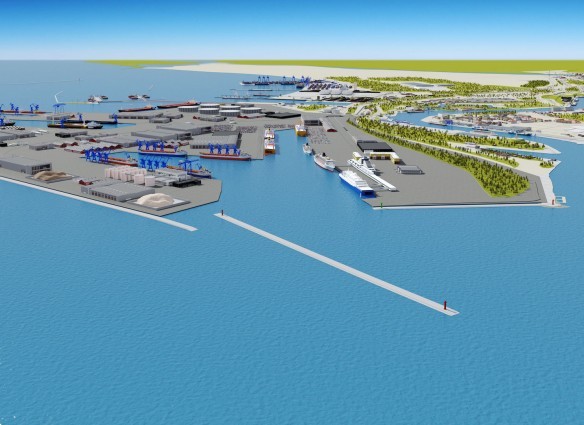 Polish ports do not cease in development and are already preparing new investments. In Szczecin, Gdańsk and Gdynia big changes are coming.

The end of 2017 and the beginning of 2018 was a very busy time in the Port of Gdynia. Intensive work is currently underway on one of the most important tasks, which is the construction of a new turntable, which should be ready to serve larger vessels, including primarily container vessels, in the second quarter of 2018. New turntable will be another milestone in the history of the Port of Gdynia, as it will primarily meet the expectations of shipping operators.

The President of the Port of Gdynia Maritime Port Authority, Adam Meller, said that "the turntable would increase the potential and capabilities of the port". "Further investments carried out after increasing the turntable will help the port in Gdynia to become a deepwater port" - he stressed. Currently, the only Polish deepwater port is the port in Gdansk.
Port Gdynia is also planning to expand the external approach fairway to 280 m, as well as its deepening to 17 m. Inland water basins will also be deepened to 16 meters, and the internal port entrance will be extended to approx. 140 m. The reconstruction of quays adjacent to the Port Channel is also planned.
It is assumed that thanks to the new turntable, ships up to 400 m in length will be able to enter the port in Gdynia. Now the port can accept ships with a maximum length of approx. 320-330 meters (bulk carriers) and approx. 240 meters (container vessels).

Port Gdynia is also planning to build brand new ferry terminal to create the possibility of servicing significantly larger passenger ferries (entering the shipping market) of up to 240 m in length, and the solutions applied are to ensure the universality of ship services. As part of the project, two-level ramp will be installed, which can be adjusted to the height of the ferry. Efficient passenger service will be ensured by a passenger gallery with an entrance connector, adapting mechanically to various locations of ships' entrances.

The Port of Gdynia also wants to build a new intermodal terminal with an estimated handling capacity of 2-3 million tons. The estimated construction cost is 123 million PLN, of which 61 million PLN is to be acquired from EU funds.

The intermodal terminal, located on approx. 30 ha, will enable railway transport from the logistics areas of the Port of Gdynia. The transshipment potential of the new intermodal terminal is estimated at 2-3 million tonnes. Port wants to build a two-track terminal with a length of 650 meters and a road connecting maneuvering and storage areas with the following streets: Logistyczna and Kontenerowa. The terminal is to be equipped with railway traffic control devices and consist of a system of storage yards designed for storing loads.

At the end of previous year Sea Port in Gdansk announced tender for the concept of development of the Central Port.. Several hundred hectares of the area will soon be home to new universal terminals. The first may be ready in 2024.

"Both the number of passengers served and the volume of goods transshipped at the Port of Gdansk are systematically growing, and the Port itself has a chance to become a leading entity in the Baltic Sea - argues Vice-President for Infrastructure ZMPG, Marcin Osowski. It estimates that in ten years the port can handle transshipments of the order of one hundred million tons per year.

Among the planned terminals in the Central Port are: passenger and cruise ships terminal, a ro-ro terminal, a chemical products terminal which and shipbuilding facilities.
According to plans, the documentation phase of the Central Port will start in 2019, while the project implementation will begin after 2020. The cost of the PGAG investment is estimated at about 6-9 billion PLN.

Bigger ships to arrive in Ports of Szeczin-Swinoujscie

The Maritime Office in Szczecin has announced a tender for the anticipated modernization of the Świnoujście-Szczecin fairway. Thanks to it, the track will be deepened to 12.5 meters, which will improve the transshipment capacity of the Szczecin port.

The tender covers the design and execution of construction and dredging works as part of the modernization of the Świnoujście-Szczecin fairway to a depth of 12.5 meters. Proposals can be submitted until 27 February this year. The contractor will have to develop project-estimate documentation and obtain a building permit.

As repeatedly emphasized by the representatives of the maritime industry, the deepening of the fairway will improve the transshipment capacity of the Szczecin port. It will be affected by ships with a greater draft. The works will also include reconstruction of bank embankments without fortifications, leveling the bottom in the Świnoujście zone, construction and reconstruction of bank fortifications and hydrotechnical constructions as well as deepening and widening of ships' turntables. Investment will cost about 1.38 billion PLN.

The Szczecin and Świnoujście Seaports Authority has also increased its areas in Świnoujście by almost 10 ha. The plot of land was bought from PKN Orlen.

The newly acquired area will be used to the develop new ferry terminal facilities, including construction of car parks. This is to improve access to the terminal and relieve the surrounding streets, especially when the traffic of trucks moving towards ferries is stacked up.

The development of the port area is also due to the fact that the terminal already used almost a hundred percent of its infrastructure and transshipment capabilities. Additionally, each year, the volume of serviced ferry freight is increasing by 10 percent. This is a signal for the Management Board to take action aimed at developing the terminal.