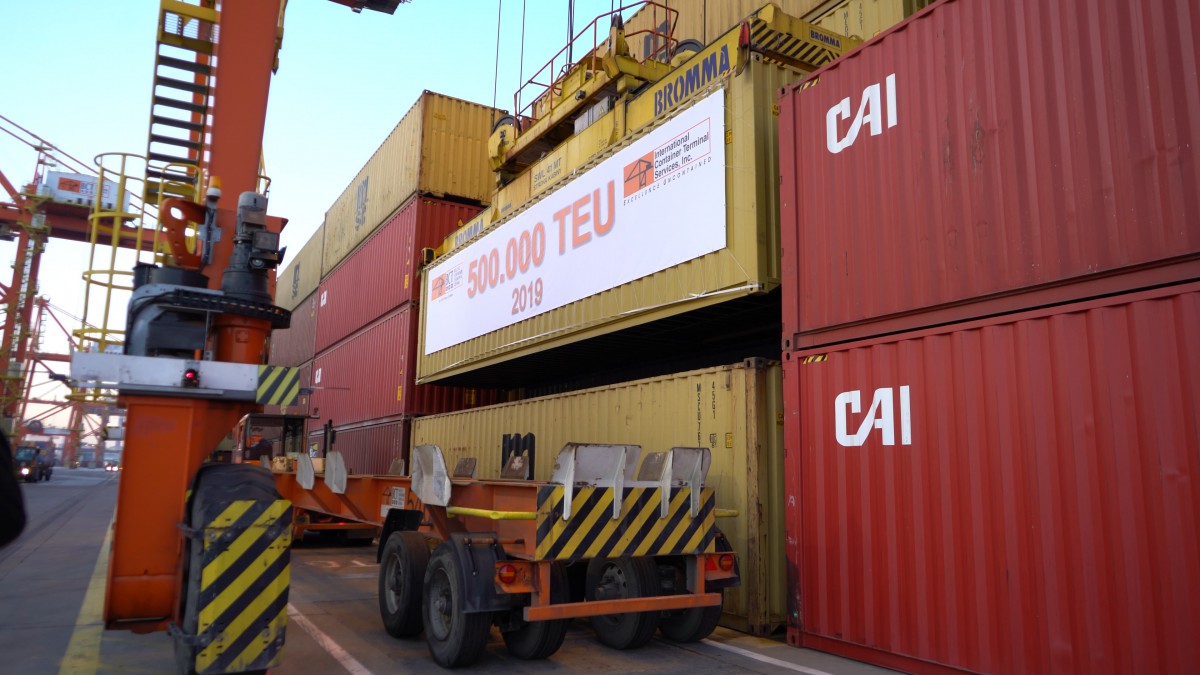 On Friday 20.12.2019 BCT - Baltic Container Terminal Sp. z o.o. in Gdynia, for the first time in its history exceeded the level of 500,000 TEU of annual transhipments. This record was achieved thanks to excellent cooperation with shipping companies and shippers who have been using BCT services for years. The Port of Gdynia is getting better and better transshipment results every year. In 2020 it is expected to exceed 24 million tons reloaded including 900,000 TEU.

"In the forty-year history of BCT operations in Gdynia and the 17-year presence of ICTSI at the terminal, we have approached the border of 0.5 million reloaded TEUs several times a year" - said Wojciech Szymulewicz, CEO of Baltic Container Terminal. "It should be emphasized that we are a gate terminal for loads intended almost for the polish economy, that's why we are all the more pleased with the achieved result... We would like to thank our customers who entrust us with their loads, appreciating the work of the BCT terminal - told Wojciech Szymulewicz, CEO Baltic Container Terminal in Gdynia.

We also hope that in the future, thanks to new port investments, we will be able to launch ocean connections, which will significantly contribute to further records" - adds Wojciech Szymulewicz.

"On behalf of the Port of Gdynia Authority, I would like to congratulate the Board and Employees of the Baltic Container Terminal, which is celebrating its 40th anniversary this year. On the occasion of the round anniversary and the upcoming holidays, I wish you more successes and more spectacular results - comments Maciej Krzesiński, Director of Marketing and International Cooperation of the Port of Gdynia

Considering the constantly growing potential of terminals, the Port of Gdynia Authority is undertaking multimillion investments that will contribute to accepting larger units and a significantly increase transhipments.

This year, the Port of Gdynia Authority SA and the Center for EU Transport Projects have signed an agreement for EU funding of project: "Expanding rail access to the western part of the Port of Gdynia - reconstruction and electrification". Total cost of investment will carry out about 70 million PLN. As a result of the signed contract, this investment received EU support in the amount of approximately PLN 20 million. By electrifying rail access, the investment will improve inland transport of the Intermodal Container Terminal.

The new turntable and deepening of the harbor basins and the reconstruction of the quays are key elements of the development of the Port of Gdynia. These investments add strategic value to Poland and trans-European transport networks.

This year, the BCT container terminal is also celebrating its 40th anniversary. Opened in 1979 for many years it was the only "window to the world" for the Polish economy. During its many years of container operation in Gdynia, the terminal has transhipped  over about 9.3 million TEU.

After the takeover of the Gdynia terminal in 2003 by ICTSI - an international container terminal operator and supported by investments, it became one of the largest Polish container terminals in the country. These many years of activity have enabled us to achieve a breakthrough result in 2019 - transhipment of 500,000 TEU.

"This is a special day for us, behind my back you can see a half-million TEU placed in a container that will be loaded into the ship. This is a special gift whick we got from our customers before Christmas. In previous years, the Baltic Container Terminal boasted large investments that have been already implemented: we have new squares and new equipment. Now is the time to consume these investments. We are happy with the half-million container, while the reloading capacity here is one million TEU, we can also double the turnover without investment. The main shipowners who use our services are: MSC, Containership , COSCO, Evergreen, Unifeeder and the Maersk group. All major players are present in our terminal - adds Wojciech Szymulewicz, president of the board of BCT in Gdynia

The Port of Gdynia, in line with the expectations regarding transhipments, is still growing. Last year, we achieved over 23 million tonnes in the entire port. This year, we anticipate that this transshipment will be over 24 million, including over 900 000 TEU. Both of our container terminals will produce the largest result ever. BCT, our largest container partner, has achieved a record result and it is a great surprise for the 40th anniversary, a great Christmas gift summarizing the year - adds Maciej Krzesiński, director of marketing and international cooperation in an interview.

Half a million TEU was loaded for export to MSC Veronique