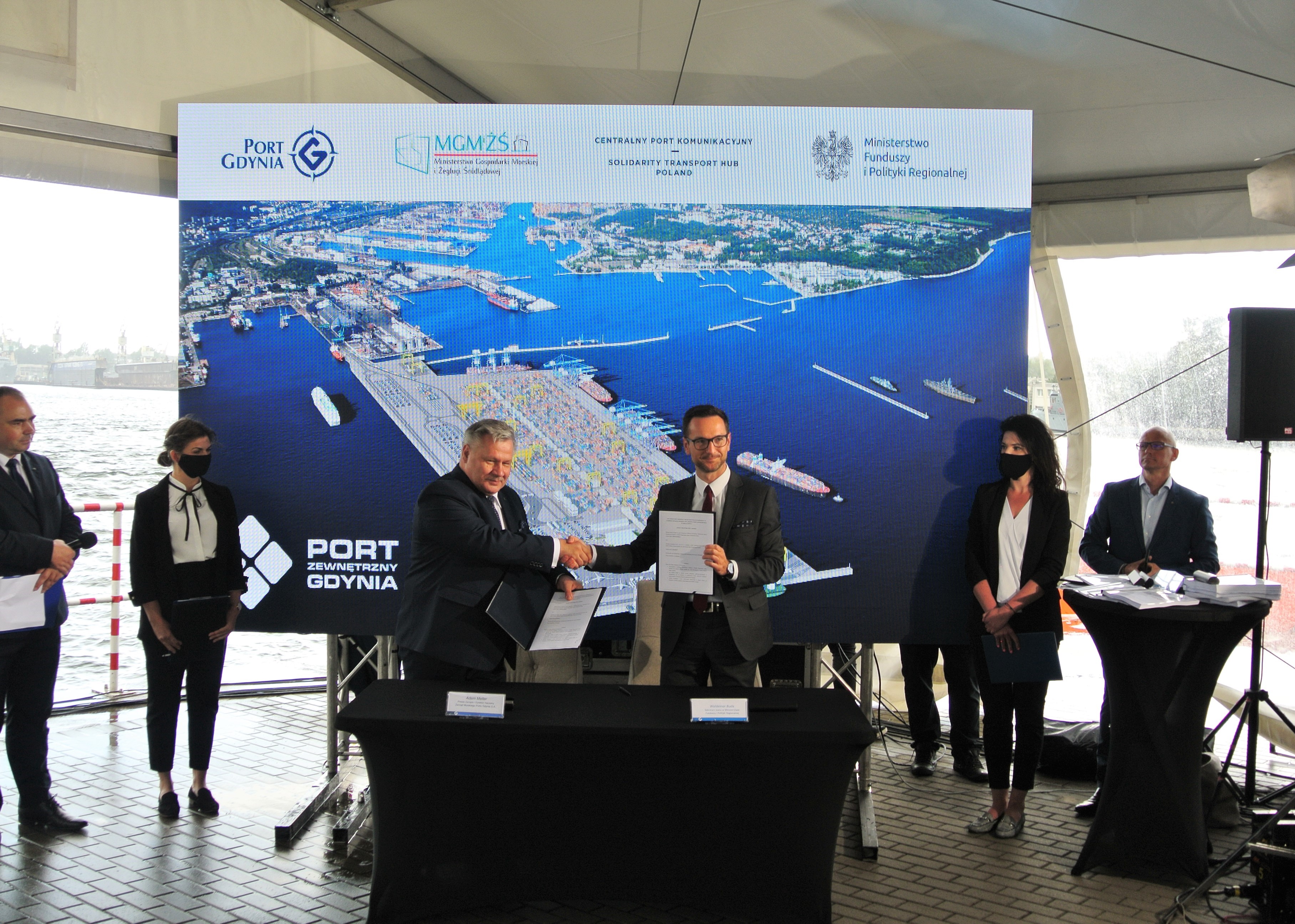 Seaports, Shipping, Logistics
Red Road to the Port of Gdynia – Investmet co-financed from Multiannual Programme for the Central Transportation Port

Marek Gróbarczyk, Minister of Maritime Economy and Inland Navigation and Marcin Horała, Government Plenipotentiary for the Central Transport Port, signed an agreement on improving access to the Port of Gdynia in the presence of Polish Prime Minister Mateusz Morawiecki. Preparatory works for the construction of the so-called Red Road in Gdynia will be financed from the CTP Multiannual Programme for 2020-2023.

The Red Road will provide a direct connection between the Port of Gdynia and the national road network, including the S6 expressway. The new dual carriageway section will lead from the Port of Gdynia to the intersection of Morska Street with the Tricity Bypass and will replace the renovated Kwiatkowski Flyover. The investment will improve the port's accessibility from the land and thus increase its cargo handling capacity.

The estimated total value of the construction of the Red Road, i.e a direct link to the Tricity Bypass, is over PLN 1.5 billion, and its implementation by the General Directorate for National Roads and Motorways is planned for the years 2020-2028.

“The Red Road will ensure optimal connection of the Port of Gdynia with the Tricity Bypass. Right now, we are next to the Emigration Museum, which is a symbol of how Poles used to sail out of the country forever in search of a better life. Today we want goods to come to Polish ports, trade exchange to increase, and thus our country to develop even faster,” – said Polish Prime Minister Mateusz Morawiecki.

Marek Gróbarczyk, Minister of Maritime Economy and Inland Navigation and Marcin Horała, Government Plenipotentiary for the Central Transport Port have made a commitment to undertake actions together in order to carry out this undertaking.

Financing of preparatory works for the Red Road was provided for within the framework of the Economic and Social Programme included in the Multiannual Programme referred to in the Act of 10 May 2018 on the Central Transportation Port. The Multiannual Programme of the CTP, which is already at the last stage of governmental arrangements, will provide funding in the years 2020-2023 for preparatory investment works on a new transfer airport for Poland, new railway lines (so-called spokes) and complementary investments.

“In the development of seaports, it is essential to ensure safe access to terminals both from the sea and from the land. Apart from railway access in Gdynia, the construction of the so-called Red Road is of great importance. I am glad that it has its place in the strategy of building the Central Transportation Port,” said Marek Gróbarczyk, Minister of Maritime Economy and Inland Waterway Transport.

„The main goal of this investment is to facilitate the transport of people and goods, which perfectly fits into the sense of the CTP's investment,” emphasized Marcin Horała, government plenipotentiary for the CTP. “This initiative shows how false the alternative between strategic and local investments built by some is. Meanwhile, it is thanks to the great, strategic investment program of the CTP that we can also carry out related local investments such as the Red Road in Gdynia,” he added.

In a separate cooperation agreement signed today, the Port of Gdynia Authority and the Central Transportation Port have committed to close cooperation in the implementation of important investment projects.

"The construction of road and rail investments will significantly accelerate the implementation of key projects for the maritime and national economy, such as the Outer Port. The construction of the Red Road will stimulate the development of the region, but also support activities for new shipping connections in the Baltic Sea,” said Adam Meller, President of the Port of Gdynia Authority.

The planned railway investments in Pomerania, in particular the construction of a new railway line no. 5 CPK-Płock-Grudziądz-Gdansk and the modernization of the existing railway lines no. 131, 201 and 202 through the Tricity to Słupsk are also important for the Tricity ports. They will make it possible, for example, to reduce the travel time from Gdynia to Warsaw to 2 hours 25 minutes and to the CTP in 2 hours 10 minutes.

"These investments mean the separation of passenger and freight traffic, thereby increasing the capacity of the rail network for freight traffic. Shortening the time of transport to and from seaports will be crucial for their further development,” says Mikołaj Wild, President of CTP.

The strategic investment of the Port of Gdynia is the Outer Port, whose construction has become a necessity in the face of growing market competition and in the face of the forecasts of demand for container cargo handling, predicting an increase in Polish seaports to the level of about 9.5 million TEU in 2050.

The construction of the Outer Port is prepared in the Public-Private Partnership (PPP) model. This means that companies will participate in the costs of the investment, in exchange for the right to carry out activities related to cargo handling. That is why Deputy Minister of Funds and Regional Policy Waldemar Buda, Government Plenipotentiary for PPP and President Adam Meller from the Port of Gdynia signed an agreement on the continuation of preparation of the PPP project.

"The construction of new infrastructure is important for the competitiveness of each port, and the application of the PPP model will provide an opportunity to optimise public spending. The key issue for the Outer Port project is to provide the necessary access infrastructure, both from the land and sea side,” said Deputy Minister of Funds and Regional Policy, Waldemar Buda.

A very important issue for the Port of Gdynia is the construction of breakwaters, which will allow access for ships of higher tonnage and will be coordinated with the creation of an additional approach fairway to the war port. The breakwaters will also become a shield for the current port entrance; they will facilitate the movement of merchant ships at the Outer Port as well as ferries and cruise ships entering the Port of Gdynia.

The Port of Gdynia serves as a nodal point of the international core TEN-T network. It is located at the entrance to the Baltic-Adriatic corridor, extended by the Gdynia-Karlskrona Motorway of the Sea connecting Gdynia with Sweden.