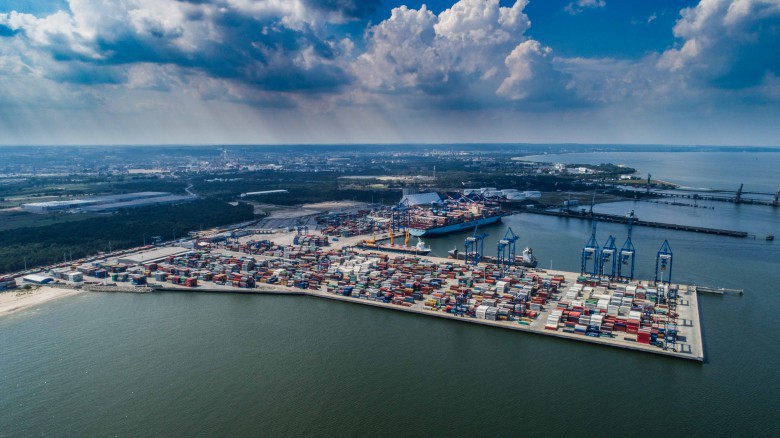 On June 27, a modern Vaga Maersk containership called at the DCT Gdansk terminal. The vessel represents the latest ice class design for the Baltic routes. Interestingly, ships from this series will be permanently included in the Baltic service with calls to Gdańsk, operated by a company from the Maerskpe group - A Maersk Company.

Vaga Maersk is the younger sister ship of the Vistula Maersk, the first ship of this class. It not only has a reinforced hull, but also many other features that enable it to navigate in extreme conditions. Ship is optimized for operation at temperatures down to -25 ° C.

Captain of the vessel, Steen B. Larsen, admitted: "With a load capacity of 3.596 TEU it is the largest ice class container vessel in the world. Ship is 200 meters long and has been adapted for navigation in all conditions in this region of the Baltic Sea. It is also a great ship, equipped with the latest technological solutions. Working on it is truly a pleasure. "

Vaga Maersk was built in 2018 in the Chinese shipyard COSCO Zhoushan. It's the sister unit of Vistula Maersk, the first of seven feeder containers with the high Swedish-Finnish ice class. The series of ships classified by Lloyd's Register takes names from rivers of the Baltic states (Poland, Russia, Lithuania, Latvia and Finland). All vessels in the series will be adapted for navigation on the Baltic Sea. A cruise to St. Saint Petersburg is often impossible for ordinary ships in the winter months and must be served by ships with ice strengthened hulls, but even these are sometimes forced in the Gulf of Finland to ask for help of icebreakers.

Last Thursday DCT Gdańsk hosted a ceremonial meeting with ship presentation for clients and the media members. It was also announced that the vessel will permanently enter the Baltic service calling in Gdańsk and operated by Sealand Europe - A Maersk Company.

Tommy Nilsson, operational director at Sealand, told: "I have been working at Maersk for 18 years and at that time I learned that there is one thing permanent in our company. It's a constant change we are undergoing to meet the expectations of our clients. The fact that our latest vessels arrive in Gdansk is the best proof that this market is very important to us. We are very proud to be here together today with our clients, employees and the entire crew of Vaga Maersk."

The role of the new vessels in the Baltic service was also emphasized by Wojciech Muchlando: "This is a new ship, new transport possibilities and certainly a significant improvement in terms of service stability and our offer".