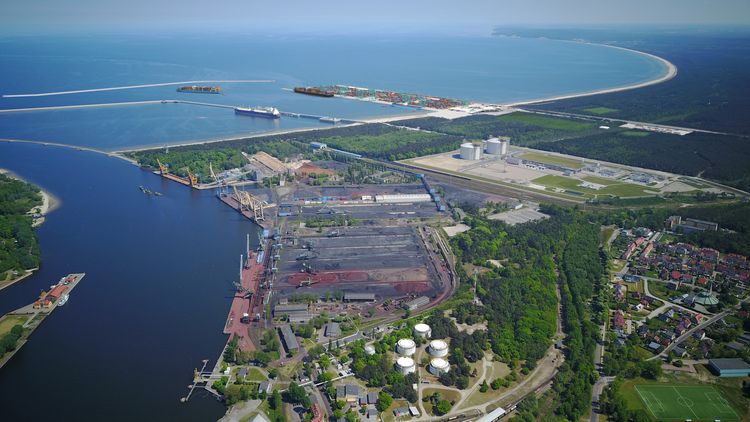 Seaports, Shipping, Logistics
Świnoujście. Intermodality is one of the cornerstones of the container terminal concept

Without the synergies provided by the combination of rail, road and inland waterway transport, it is scarcely possible to meet competition and customer expectations in contemporary market conditions while maintaining high environmental standards. Therefore, in the case of container terminal in Świnoujście, intermodal will be the mode of transport that shall mainly connect the terminal with its hinterland.

The intermodality of transport in the concept of a deep-water container terminal in Świnoujście is obvious – admits Krzysztof Urbaś, President of the Management Board of the Szczecin and Świnoujście Seaports Authority. - We closely observe the transport market, legislative changes, dynamics, and analyze market trends. We are aware that intermodal transport is imminent and basically a necessity. We are also aware of the importance of environmental aspects. That is why we are already focusing on infrastructure investments, in order to be able to benefit from the full chain of the greenest mode of intermodal transport when the terminal is completed. Therefore, we are already adapting the infrastructure of the ferry terminal in Świnoujście to support intermodal transport. The ferry terminal is located in the immediate vicinity of the future container terminal and will offer that kind of services as early as next year.

In global maritime transport the changes are dynamic, significant increase in the size of ships among other things – and in consequence larger parties of containers handled in ports at each ship’s call. We also note the increasing importance of intermodal transport chains. Containers along ocean routes are shipped between sea ports, than they are moved to railway trains, and then onto trucks - to reach the final consignees.

The use of intermodal transport is an excellent solution used in the sustainable maritime supply chain: environmentally friendly, cost-effective, helping to reduce traffic on the roads. The Highway Code rules for loads transported in the intermodal system allow for a higher maximum mass of the vehicle for the 'last mile' section, allowing intermodal deliveries of heavier freight units than it is possible along the road transport route only. The container terminal in Świnoujście also gives the possibility to use inland waterway transport, which is the cheapest and greenest mode of transport. The planned revitalisation of the Oder Waterway is an opportunity for the recovery of this mode of transport for delivery between the seaport and its hinterland. The terminal in Świnoujście, with convenient access to the Oder Waterway, the international railway line and with a smooth road connection will give the opportunity to effectively connect all available modes of transport.

It is the synergy resulting from the combination of maritime, rail and road transport that makes delivery cheaper on the one hand, and greener on the other. As a result of the intermodal chain - containers or semi-trailers are increasingly delivered using ecological methods of transport, and to a lesser extent – just the road transport. As a consequence, the traffic at roads and highways gets easier, gas emissions into the atmosphere are reduced, etc.

As part of the investments included in the intermodal transport project, PKP Polskie Linie Kolejowe S.A. improve and modernize the railway infrastructure of the ports in Szczecin and Świnoujście at the cost of PLN 1.5 billion. They will modernize nearly 100 kilometers of tracks, along with almost 84 kilometers of traction power network. As many as 285 rail crossovers will also be replaced, modern traffic control systems will be installed, and 22 road crossings rebuilt. In Szczecin, they will rebuild a bridge over the Parnica River and 3 railway viaducts. According to the schedule, the work is to be completed by mid-2022.

Another investment of PKP Polskie Linie Kolejowe S.A. will be the modernization of the international railway line CE 59 (so-called Nadodrzanka), connecting Świnoujście with Lower Silesia and further to the border with the Czech Republic, which is a connection of the ports with Central and Southern Europe. The investor will adapt the tracks to longer and heavier trains and speeds of up to 120 km/h.

The ports of Szczecin-Świnoujście are connected with the European motorway system via A11 and A20 highways, while expressway S3 (E65) will connect Świnoujście with the Czech border as early as in 2024.

The Maritime Office in Szczecin will complete the dredging of the canal between Świnoujście and Szczecin to 12.5 m next year. That modernization will cost about PLN 1.4 billion, and is very important in the context of the inland waterway transport chain.

The Oder Waterway (E30), included in AGN convention, will be gradually modernized as a water route of international importance, in line with the government's strategy of improving the parameters for navigation on Polish rivers in the long term.

Offers can be submitted until January 28th, 2021

Proceedings are ongoing to select the investor and the subsequent operator of the deep-water container terminal. Interested parties may submit their bids until January 28th 2021.