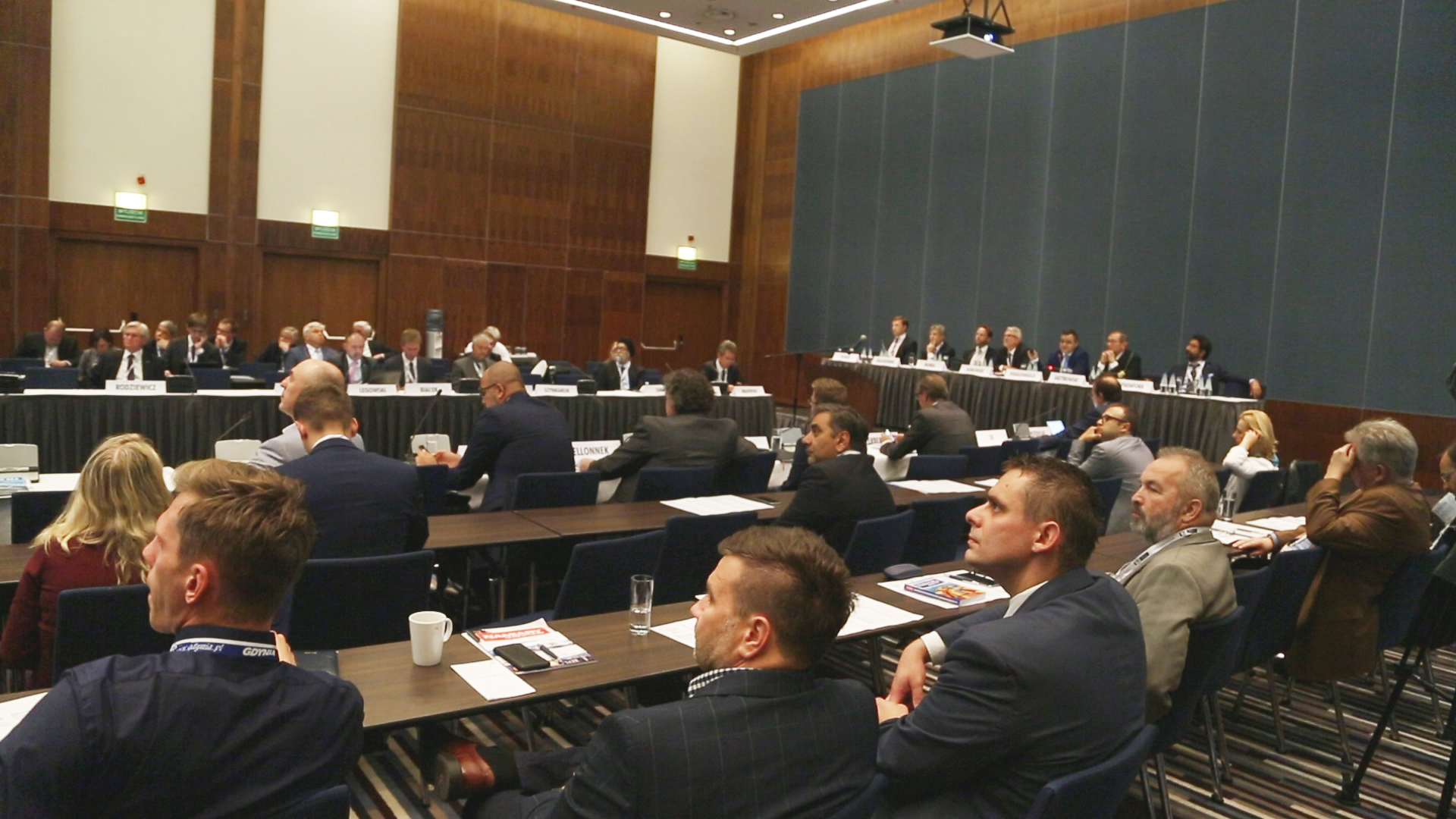 The *1st MARE FORUM POLAND* was held in Sopot, Poland on 21 September 2016 under the Chairmanship of Apostolos Poulovassilis, Chief Operating Officer of Eletson Corporation. The event was organised by *Mare Forum* under the *Honorary Patronage*of the *Marshal of the Pomorskie Voivodeship* and a wide range of excellent presentations, very good discussions and a positive atmosphere, which resulted in new perspectives and ideas being explored and a conference day that was thoroughly enjoyed by all participants.

Mare Forum President *Jannis Kostoulas* welcomed all participants stating that Poland is a key maritime country with strong growth potential hence the decision to add it to the Global Mare Forum network of conferences.

Conference Chairman *Apostolos Poulovassilis* gave the audience an outlook of key industry issues as well as the opportunities and risks for the development of the Polish Maritime Industry. Recent regulatory developments at IMO where the Ballast Water Convention has been ratified could present an opportunity for Polish shipyards which willneed to prepare their technical offering accordingly. The Brexit vote in June also poses some risks for Europe and Poland in particular which will need to be analysed and addressed. Mr Poulovassilis finally emphasised the need for Polish yards and companies to focus on specialisation in order to differentiate in niche elements of the shipbuilding/shiprepair sector in order to enable further growth.

The key policy issue raised by Deputy Marshal, Pomorskie Voivodeship, *Wieslaw Byczkowski *concerned the development of Offshore Ports & Logistics as a top priority, as well as the importance of Pomerania in the regional network of the European Commission and the high ranking position of Gdansk and Gdynia within the Baltic Sea ports.

*Ambassador Wojciech Ponikiewski*, Deputy Director Economic Cooperation Department, Ministry of Foreign Affairs presented an outline of the challenges facing Maritime Poland and explored the relationship between globalisation and the Polish Maritime Economy. The development of the LNG sector was highlighted as a key growth opportunity and progress that Poland was making, was stressed with a characteristic quote: "We are coming back to Europe."

*Bogdan Oldakowski*, Member of the Board, Pomeranian Chamber of Commerce, described the Baltic Ports situation and policies and emphasised the growth of Polish ports over the past decade and in the container segment in particular. Preparations for LNG bunkering were also highlighted as business opportunities going forward.

*Guy Verberne*, Chief Economist, PGGM Pension Fund, showed that we could be at a turning point for Emerging Markets and a possible return of optimism in the global economy. With China stable at more modest growth, other emerging markets such as Russia, Brazil, India and Indonesia could provide a boost to global economic growth while US and EU struggle. "We need more Europe and not less" was the conclusion.

*Marcin Bialek*, Minister Counsellor, Ministry of Maritime Economy and Inland Navigation, outlined the Government's initiatives to "rebuild" the Polish Shipbuilding Industry promoting Innovation and Experience. He also went on to describe the Polish Inland Waterways development plan 2016-2020 via fund set up with the support of the National Economy Bank (BGK).

*Piotr Kus*, Director of Brussels Office, Gaz-System S.A., explained that Poland is the biggest natural gas market in Central/Eastern Europe but that it still represents a relatively modest proportion of the overall Energy mix. The growing importance of the Swinoujscie gas terminal was outlined and the potential of the terminal as a regional supply solution.

*John Su*, President & CEO, Erasmus Shipinvest Group, gave an update on the developments in China with the slowdown still having a profound effect on world commodities trade but with stimulus measures put in place earlier in the year the demand for iron ore and coal could be boosted.

*Pawel Szynkaruk*, Director General, Polska Zegluga Morska (Polsteam), explained the root causes of the "dry-bulk problem" and went on to describe the potential of LNG bunkering for the region.

*Dr. Jerzy Majewski*, SVP Shipping Europe, HSH Nordbank AG, described the retreat of Global Shipping Finance in 2016 under increased regulatory pressure but stressed that banks lending is available for "good" projects and with banks remaining focused on their existing clients. In view of the overall depressed markets, investor interest (PE) in shipping has cooled down further.

*Zbigniew Kurowski*, CEO MARS Design & Solutions, went through the main design characteristics of "Smart Ships" explaining that these are a combination of many innovative features and highlighted the opportunity of the renewal of the Polish Ropax fleet for applying these new technological advancements.

*Pino Spadafora*, Area Manager Northern Europe – Continental Area, RINA, pointed out that increased use of digital technology on board has brought increased risks to cyber security and the need for shipowners and shipyards to focus on the overall ship network in order to identify and address vulnerabilities.

*Irek Kuligowski*, Chairman Polish Shipmanagers Association and Managing Director Green Management Sp z o.o. outlined a possible approach to Shipmanagement for Poland with the creation of a "Pomeranian Ship Management Centre" and the opportunity to become the "Singapore of the Baltic Sea".

*Andrzej Rodziewicz*, Board Advisor - Strategy & Development, MS TFI S.A. (Mutual Funds Society S.A.), gave a proposal for further development of the Polish maritime sector via the renewal of the naval fleet, the ropax segment, inland waterways and LNG bunkering. A prerequisite for this would be support of innovation by the government and the effective implementation of new legislation enabling the re-industrialization and development of Polish maritime economy by the Ministry of Maritime Economy and Inland Navigation. Polish companies have an opportunity and if they can develop further then Poland could progress in regaining a higher position in the Global and European maritime economy in the years to come.

*Professor Marek Grzybowski*, President Polish Maritime Cluster, effectively led a brainstorming session on the Polish Maritime Cluster with
many audience participants contributing to a SWOT analysis of the Polish maritime industry. The key conclusions of this analysis were that the legislative framework will need to be very robust, with government providing incentives for innovative companies and also promoting a
level-playing field. The need for the industry to enhance its external representation on international bodies was also discussed.

This year’s inaugural Mare Forum Poland on the last session of what will now become a regular Annual Event, took several key issues that the industry is wrestling with – LNG as a marine fuel (as well as other alternative fuels such as methanol), more autonomous ships (which could also ease the bottleneck on supply of competent seafarers), specialisation (on niche markets), competitiveness of Polish Flag and the development of the Vision of the Maritime Cluster - as themes to take forward throughout the year via the newly created Mare Forum Poland Community and then analyse further at the 2017 Mare Forum Poland (2nd week in May 2017).