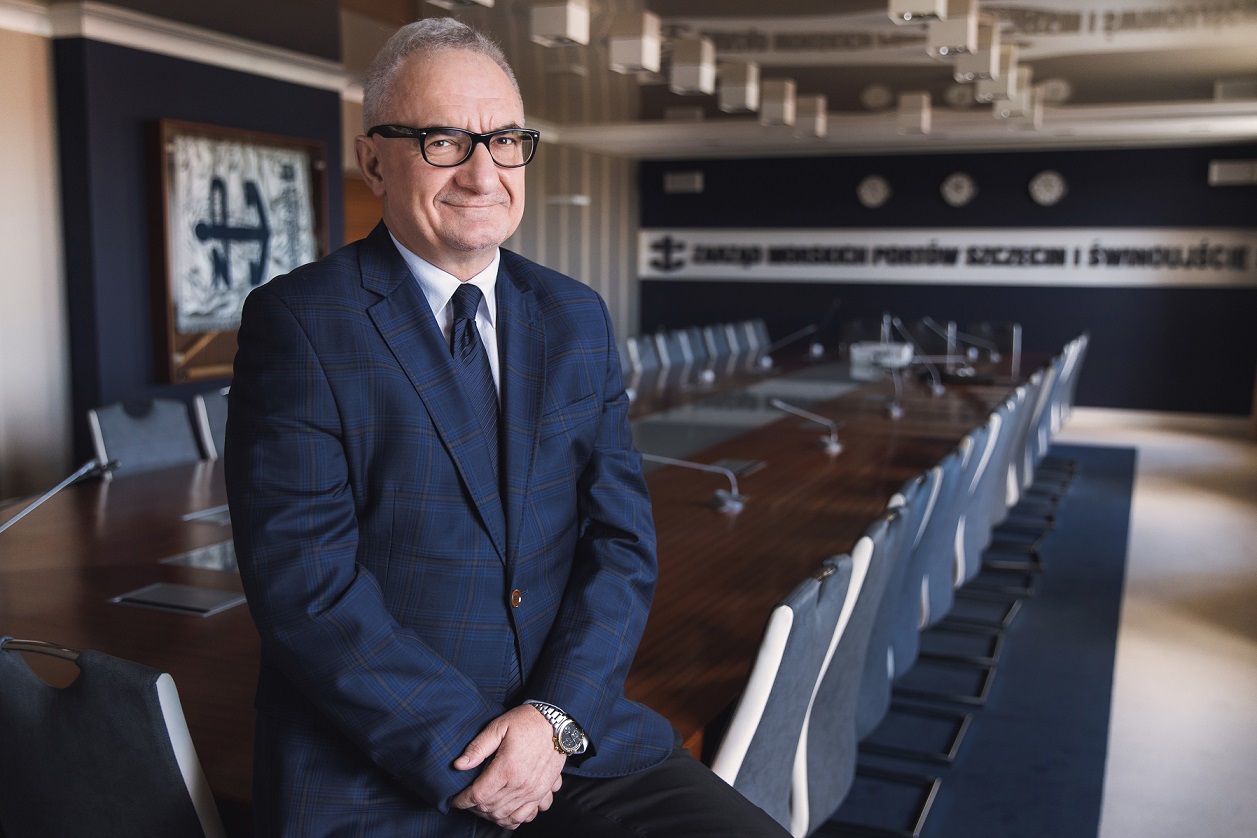 Seaports, Shipping, Logistics
Szczecin-Świnoujście Seaports: we have to seize the opportunities offered by our location (interview)

- If we manage to implement all our investment plans, in 2050 we will have the potential in the Szczecin-Świnoujście Seaports to handle almost three times more cargo than today - assures the President of the Szczecin and Świnoujście Seaports Authority, Krzysztof Urbaś, with whom we discuss the breakthrough construction of the deepwater container terminal, work during the pandemic, and the enormous role of corporate social responsibility.

Your first year as the President of the Szczecin and Świnoujście Seaports Authority has recently passed. How has this time been from your perspective?

Indeed, it was my first year in this position, but at the same time, I have already worked 38 years in this industry. I must admit that I am very happy to be able to work here, having devoted most of my professional life to the ports of Gdynia and Gdansk. I also gained experience in freight forwarding and shipping, but it was all closely related to ports and sea trade.

Ports are very interdisciplinary businesses. In the Szczecin and Świnoujście Seaports, we can see all four main modes of transport - sea, rail, road and inland navigation. This interdisciplinarity makes the work very interesting and has always fascinated me. I am happy to spend the last years of my professional career in ports.

In my daily work, I have the unique opportunity to create new projects and tasks, which brings me great satisfaction. What we are doing today was obviously not my brainchild; it is a continuation of some tasks that were developed in the last five years or earlier. Today, I can say with undisguised joy that despite COVID, we are implementing everything that we planned for this year.

The second issue is all the planned investments and large projects, such as the deepwater container terminal and a change in the image and character of the port in Świnoujście. We want to propose a completely different image of this place - greener and more ecological. This, of course, is also related to new projects concerning the deepwater section of Świnoujście.

New investments in ports are certainly met with different public reactions, especially when the city and port is as close as here.

Everything that we are currently implementing remains within the new port borders. Of course, there were moments that aroused great opposition from the residents, especially those living in the direct vicinity of the port. We believe, however, that our public consultations have done a lot of good for both the residents and ourselves. We have come to an understanding and we have incorporated many comments and ideas suggested during these consultations into our development concepts.

The flagship investment you mentioned is the construction of the deepwater container terminal. Could you tell us what stage this investment is at?

The preparatory work has already been completed. On September 18 a press release was published concerning the commencement of procedures aimed at concluding a preliminary contract with the company that would land the site and locate the container terminal there.

We are looking for a company that will design, finance and implement the investment, and be the operator. It is definitely a flagship project for our port complex. This terminal will primarily change the perception of our two ports on a global scale. As Jacek Bartosiak once said, ‘Work in ports should be guided mainly by thinking about space’. Extending his thought – we have to take advantage of the possibilities offered by our location. We are trying to do just that. Taking into account Polish ports, Świnoujście is the closest to the Danish straits, i.e. from the main entrance to the Baltic Sea. There is an 11-hour difference one way when it comes to sailing between the Tri-City and Świnoujście. In practice - that saves almost a day both ways. For the largest ships entering the Baltic Sea, this is a saving of $150,000 to $200,000!

The deepwater container terminal will also activate our facilities to recover certain cargo that has left Szczecin and is currently being transhipped at the DCT terminal in Gdańsk. This is obviously related to the fact that Gdańsk is currently the only port in the Baltic Sea that provides ocean connections, especially from Southeast Asia.

We intend to become a part of this service, but not necessarily by taking loads from Gdańsk, but rather by acquiring new ones for our facilities, including indisputable routes, i.e. the corridor between Świnoujście and the Czech Republic and Italy, which at the same time fits into the Baltic-Adriatic corridor, which will connect the sea basins - the Mediterranean through the Adriatic Sea with the Baltic Sea, Scandinavia and the British Isles. We hope that the new terminal will activate not only deep-sea calls, but also short-sea shipping, which, in view of Brexit, will certainly gain a new meaning.

The deepwater container terminal is planned for 2 million TEU, which means that its operating capacity should be between 1.5 and 1.7 TEU after the completion of both construction phases.

The terminal will enable the simultaneous operation of at least two ULCS / megamax units with drafts of 15 m, which are those permitted through the Danish Straits. We will have to create a new 17 m-deep access channel. This work is currently under preparation as the entire access infrastructure must be synchronized in time. We are in the process of making final arrangements for the S3 road, and the railway line is under construction so that connections with back-up facilities meet the relevant needs, which will crystallize during the operation of the terminal.

Additionally, depending on the level of automation of facitities, it is estimated that even several hundred people may be employed in the deepwater container terminal in the seaport in Świnoujście. It should be emphasized that each job directly in a seaport creates an average of two jobs in the port sector and an average of four more jobs in the immediate vicinity.

The construction of the deepwater container terminal is not the only investment project planned for the coming years. What else is happening at ZMPSiŚ?

Indeed, we have a lot of projects planned. We are carrying out projects related to the deepening of the fairway to 12.5 m (an investment by the Maritime Office). Although the deepening of the fairway itself is a task that is the responsibility of the Maritime Office in Szczecin, the role of the Port Authority is to adapt the port quays in Szczecin to the new parameters of the fairway. This investment brings a new quality to the port of Szczecin. We will gain new land that we can successfully use and develop for port purposes. New quays and new terminals mean a further increase in the handling capacity and thus a greater amount of goods in our ports. This investment is also an introduction to the further development of the western part of Ostrów Grabowski. If we manage to implement all these investment plans, then in 2050 we will have the potential in the Szczecin-Świnoujście ports to handle almost three times more cargo than today.

We also want to combine two ferry stands to make one large one, currently the largest in the Baltic Sea. Ultimately, this will be 270 m long. The largest ferries that have ever sailed in this area will be able to call here. We will also create an intermodal terminal here, i.e. at least a connection between ferries, rail and road. Additional railway tracks will be built, which will allow the transport of more trailers.

In 10-20 years we want to expand southwards on the basis of the Ferry Terminal. We have selected two areas where we can create two more stands for ferries. Additionally, we are building a second LNG import station together with PGNiG at the LNG terminal. There will also be a stand for bunkers and ships at which it will be possible to load and re-export via the Baltic Sea.

Railway access is a joint investment for Szczecin and Świnoujście, which I hope will one day change the image of these ports. It is mainly an investment by PKP PLK, but as the ports’ management, we will participate in the final stages of this investment.

There is also an investment in Świnoujście which is associated with the ferry terminal. This refers to the appropriate facilities, i.e. the construction of a car park or even two for trucks and trailers, which will increase the capacity of the ferry terminal.

We also have investments in technical infrastructure. These include the renovation and creation of new energy, and electric, computer, water and sewage networks. Everything that is under the ground and practically invisible on a daily basis.

Interestingly, all the works I mentioned are being carried out during the normal operation of the port. This is quite a complicated operation that requires a lot of organization on the part of port operators.

The subject that has dominated our daily life and the work of ports today is COVID-19. How are you doing in this difficult time?

Of course, this is a very important matter that we take very seriously. The second quarter of this year was particularly difficult for us, but I must admit that we are quite optimistic because the crisis did not affect us as much as had been expected.

Despite the difficult epidemiological situation, the continuity of the supply of goods has not been threatened and all major investments in both ports are progressing smoothly.

Of course, there are cargo groups such as coal and ore that are handled in smaller quantities than last year, but this is not a direct consequence of the pandemic. However, we see a strong light at the end of the tunnel because September was the first month in which transshipments increased by nearly eight percent compared to last year. This trend should continue.

Additionally, LNG reloading at the terminal in Świnoujście is systematically growing, as planned. We have a 22% increase compared to last year.

There is also the ferry terminal in Świnoujście, the largest terminal of its kind in Poland. At the moment, we have 12 departures a day. Of course, in the second quarter we had to deal with the suspension of passenger traffic, but from the third quarter we can see a very dynamic return to the daily amounts from last year. Therefore, we are optimistic that a significant part of the losses should be recovered by the end of the year.

Of course, we take into account the possibility of the number of Covid-19 cases increasing, but we hope that it will not significantly affect our work. We have already managed to organize an effective model of remote work and introduce solutions that will not reduce the quality of our services.

During the pandemic, many companies, including ZMPSiŚ, are committed to helping. Could you tell us what actions you have taken recently?

We reacted to this situation very quickly. Already in the first weeks, we made the decision to allocate one million zlotys to the purchase of various devices necessary for the operation of hospitals. We supplied four ventilators, one ambulance, 50 infusion pumps and 20 cardiac monitors. In addition, we tried to successively acquire the necessary personal protective equipment, such as liquids, gloves and masks.

Despite COVID, we tried to fulfill the role of corporate social responsibility. Our company line, which we embraced many years ago, is investing funds in children and young people. We have an agreement with the Szczecin Board of Trustees, so we respond to immediate needs. We also support local competitions, and sports, art and music associations. We invite children to the ports and we try to keep in touch with them. I hope we can encourage some of them to work here in the future.