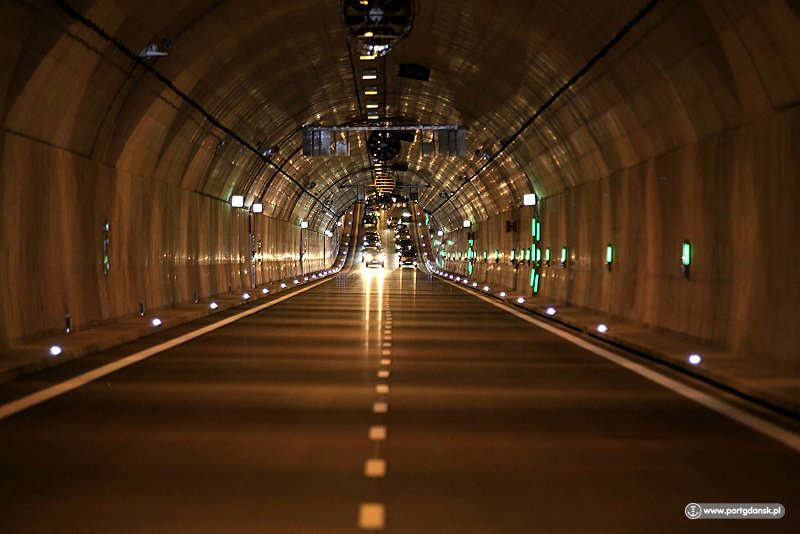 Seaports, Shipping, Logistics
The first, and longest underwater crossing in Poland, in the heart of the Port of Gdansk, is now open

The tunnel under the Martwa Wisla was ceremonially opened last Sunday. Thus, the long-awaited link between the right- and left-banks of the Port of Gdansk came into being.

The idea of the tunnel's construction dates back to the mid-1990s, when the Port of Gdansk began working on the concept of connecting both sides of the port, and the usefulness of such an investment from the point of view of the port-related activities conducted here. Apart from the construction of the tunnel, a bridge over Martwa Wisla was also being considered at the time. Proposals included the construction of a bascule bridge (drawbridge) or a swing bridge, but also the construction of a tunnel - with the use of the excavation and boring method. Initially, the idea did not have too many supporters. It was pointed out that the undertaking would be very cost-intensive, disproportionately to the investment's utility. It should be noted, however, that in the second half of the 1990s, Gdansk's cargo turnover reached 18-20 million tonnes, i.e. half the volume handled at the port today.

Finally, 2011 came, and Gdansk's municipal authorities launched the project of the crossing under the Martwa Wisla, thus initiating the first, and largest investment of this type in Poland.

In October 2012, the most important components of the tunnel boring machine arrived at the Port of Gdansk on board the "Deo Volente", including the machine's engine, weighing nearly 230 tonnes and built especially for Gdansk at the German "Herrenknecht AG" factory. In late May 2013, the tunnel boring process began, and 12 months later, completion of the boring works was announced. Finally, on 24 April 2016, the underwater crossing connecting both sides of the port, situated on the opposite banks of the Martwa Wisla, was ceremonially opened. Thus, the last element of the Slowacki Route, connecting Gdansk's seaport and airport, was commissioned and put into operation.

At the same time, the demand for full land access to both sides of the port was met. Up till now, the easy transport of goods into the port from inland areas via the A1 motorway, the S7 expressway or Gdansk's Southern Ring Road (Obwodnica Poludniowa) was limited to the right-bank of the Inner Port and the deepwater area of the Port of Gdansk. Now, thanks to the tunnel, the convenient connection of the port with the land base, and the main road network and motorway includes all of the port's quays.

The issue of considerable improvement of the conditions, and the reduction of costs for the transport of goods to and from the Port of Gdansk cannot be underestimated, either, as it will undoubtedly increase the investment attractiveness of the port related branches of economy. and stimulate port-related economic activity. The external side of the port is already home to the largest container terminal in the Baltic Sea and a huge logistics centre - currently the largest centre of this type in Poland, with a target storage area of approximately 500,000 square metres.

Year by year, the great dynamic growth of Gdansk's port, whose turnover has increased by as much as 60% within the last decade, is also influencing the ever increasing intensification of incoming and outgoing traffic on land. For example, last year, port activity generated traffic of nearly 346,000 trucks, while the total number of vehicles - both passenger cars and trucks - registered in Gdansk was just over 300,000. This means that almost a thousand vehicles a day passed through Gdansk's port during the previous year. These vehicles will now be able to bypass the city centre and smoothly leave the port thanks to the now complete tunnel under the Martwa Wisla - the first, and longest underwater crossing in the country.