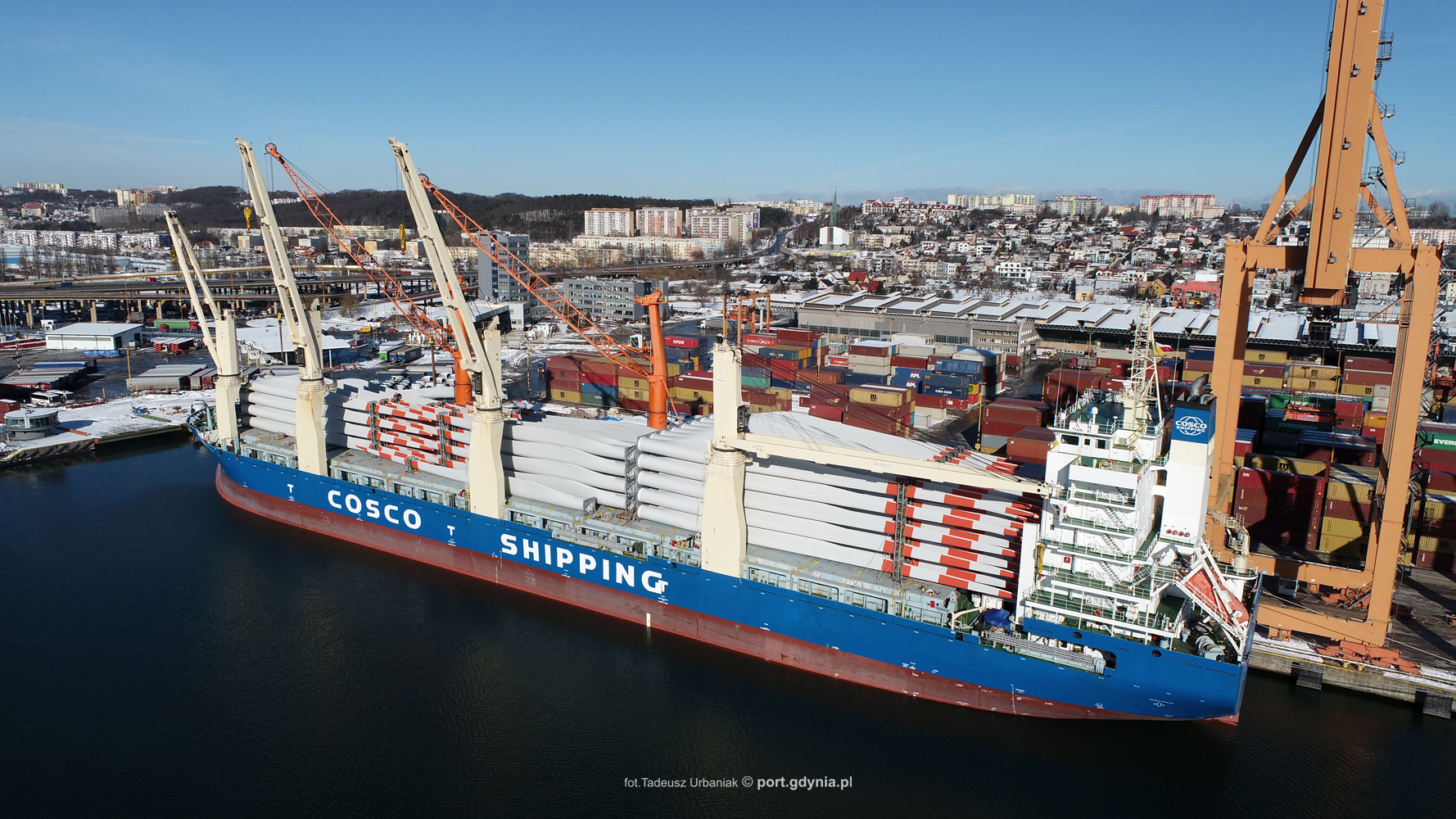 Seaports, Shipping, Logistics
The largest single delivery of wind turbine propeller blades in the history of Poland in the Port of Gdynia

Wind turbine propeller blades has arrived at the Port of Gdynia. MAG together with DSV broke another record. Tian XI vessel, measuring 190 meters long, delivered as many as 114 blades commonly known as propellers.

The cargo is impressive, because all the elements were attached to the deck, and the propellers themselves measure 54 meters in length. Another such cargo this year was unloaded at BCT Gdynia terminal. The unloading took two and a half days, and the delivered blades set off on their further journey to wind farms in Poland. MAG has traditionally provided agency and port services for the ship.

The growing wind power market in Poland and the efficient handling of logistics chains makes the Port of Gdynia a leader in handling wind turbine components in this part of the Baltic Sea.

"This type of cargo is received at the Port of Gdynia more and more often. We are intensively preparing for projects that will be implemented not only on land, as is currently the case, but also in the Baltic Sea. Our terminals are already 100% ready, there are still some minor investment works to be done," comments Maciej Krzesinski, director for marketing and international cooperation of the Port of Gdynia S.A.

Both the location, infrastructure and experience in handling this type of cargo make the Port of Gdynia seem to be the first choice for handling offshore wind farms.

Offshore wind energy can add significant value to the GDP and create additional jobs by 2030. Already today, more than 100 Polish entities that can be successfully involved in the processes of preparation, construction and operation of wind farms in the Polish Baltic Sea have been identified. For many local Polish companies, becoming involved in the offshore energy industry will be an opportunity for significant growth, providing them with an opportunity to generate high revenues. At the beginning of February this year the Act on the Promotion of Electricity Generation in Offshore Wind Farms was published in the Journal of Laws. It contains the regulatory framework for the development of offshore wind energy in the Baltic Sea.

European investments in new offshore wind farms in 2020 amounted to EUR 26.3 billion, according to a report published on Monday by WindEurope - the largest European organization in the wind energy sector. Europe currently has 25 GW of offshore capacity, with less than 3 GW added in 2020. According to the EU strategy, in 2050 the EU should have 300 GW in operation. Today, offshore wind energy in Europe employs about 77 thousand people, and in 2030 the sector should employ 200 thousand people. In Europe there are currently 116 farms in 12 countries, of which 40 percent of the capacity are British. Investors recognize that offshore is cheap, reliable and resistant to economic turbulence.