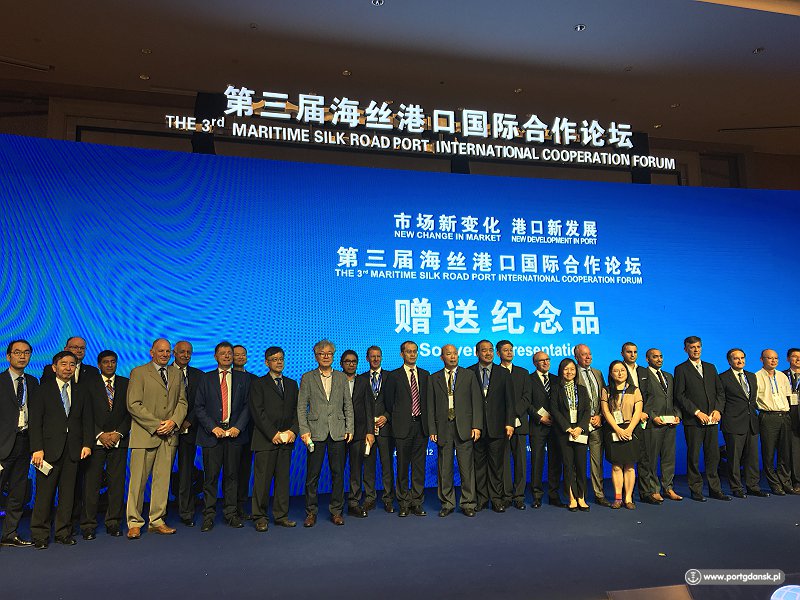 Seaports, Shipping, Logistics
The Port of Gdansk Authority participates in a debate on the Silk Road

Representatives of the Port of Gdansk Authority took part in one of the most important international conferences dedicated to the Silk Road idea for the second time already. This year, the 3rd Maritime Silk Road Port International Cooperation Forum, organised cyclically in Ningbo, China, focused on the development of sea and road transport with the participation of Poland, Slovenia, Croatia, Romania, and China, among others.

The Port of Gdansk Authority attended the 3rd Maritime Silk Road Port International Cooperation Forum. For the PGA's representatives, this was yet another visit in China. As part of the conference, a meeting of four ports from East-Central Europe and the Port of Ningbo was held. The aim was to present the opportunities for activities and to emphasise the role in the Silk Road project. The participants also analysed future GDP increases and decreases for over 60 countries situated along the Silk Road.

China ranks third among the most important non-EU trading partners of the Port of Gdansk, taking into consideration the country of origin and the destination of the cargo handled at the port's quays.

"The Port of Gdansk's appearance at the conference dedicated to the development of the Silk Road was a great success. Our presentation primarily highlighted the Central Port investment and its entry into the next stage, i.e. the feasibility study. However, the second part of the visit was equally important. It was a series of meetings with potential customers of the Port of Gdansk, active in the financial and logistics sectors, as well as with engineering companies and contractors," says Lukasz Greinke, President of the Board of the Port of Gdansk Authority.

In April 2017, the Central Port investment (the centrally situated port at the Port of Gdansk) was included in the government programme with the support of the Minister of Transport. This means that Poland's chances of participation in the Silk Road project are even higher. Poland is an important partner for the Chinese not only due to excellent GDP forecasts, but also on account of its reputation as the largest and particularly prospective market in East-Central Europe. China, in turn, is one of Poland's non-EU business partners with the highest growth potential.

Enlarge"After numerous meetings with Chinese institutions, we can clearly see China's huge interest in East-Central Europe. The Chinese are intent on cooperation with this part of Europe, also because of the dynamically developing trade, in which the Port of Gdansk invariably leads the way thanks to regular container links," says Michal Stupak, marketing specialist at the Port of Gdansk Authority.

In total, the two-day meetings were attended by more than 450 participants: representatives of ports, government bodies, and transport and scientific institutions operating in the broadly-defined maritime economy area. Guests listened to the speeches of 12 speakers from Europe and 27 from Asia (including 21 from China alone). It was already the third logistics conference organised in Ningbo, China as part of a series dedicated to the Silk Road. Its organisers include the province and the Port of Ningbo, APEC Antwerp, Port Klang, the Shanghai International Shipping Institute, Drewry Shipping Consultants, the Port of Antwerp, China Merchants Holding, the Port of Rotterdam, the Port of Singapore, and the Korea Maritime Institute.