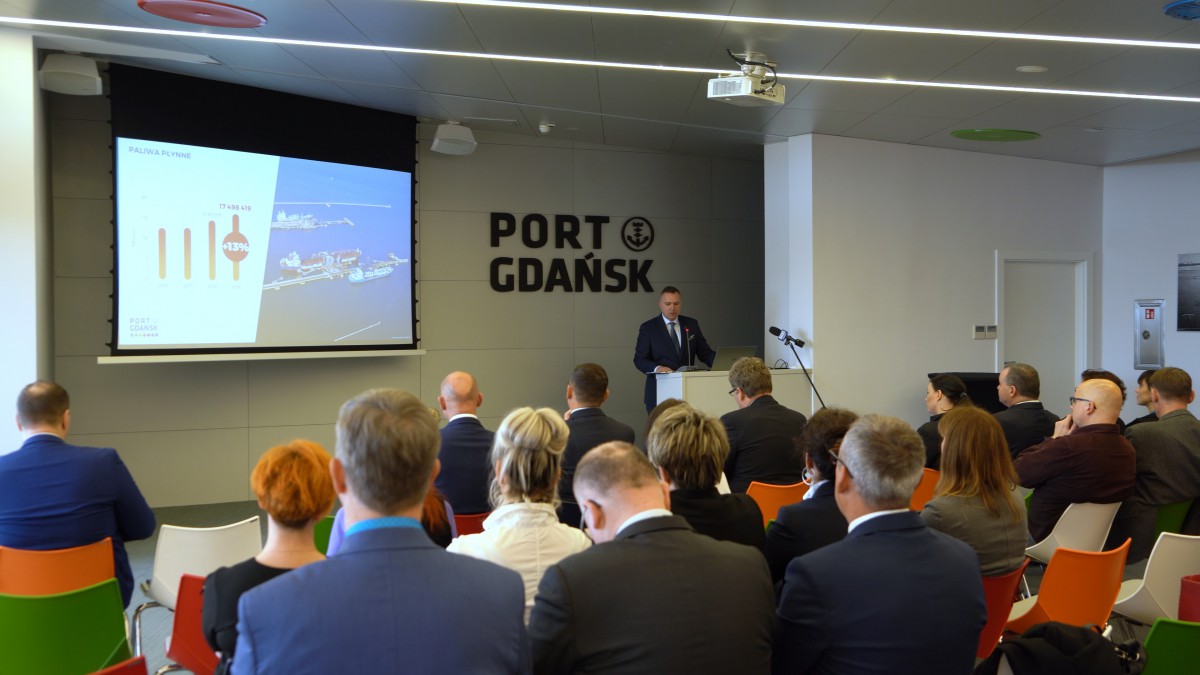 Seaports, Shipping, Logistics
The Port of Gdansk breaks the Polish record in transhipments! 52 million tonnes in 2019

"The Port of Gdansk breaks its own records and sets new challenges" - said the President of the Board of PG Authority, Łukasz Greinke, during the next press conference. There are reasons to be proud, because in 2019 the Port of Gdansk included a new transhipment record, exceeding 52 million tonnes. The company has reported impressive increases in almost all load groups.

As Adam Kłos, commercial director of the PGA, told us: "The last decade has tripled transhipments at the Port of Gdansk. From registers at the level of approximately 17-18 million in 2007-2008, closing the year 2019 we can summarize them at the level of over 52 million tonnes. So we have crossed the 50 million barrier, increasing by 6.4% compared to 2018. We are constantly moving forward. From 2016 to 2019, the increase in transhipments at the Port of Gdansk is estimated about 40% and we would like to continue this increasing trend."

Adam Kłos also emphasized that the volume of transhipments in 2019 meant that we entered the "heavy weight" ports handling over 50 million tons: "This allowed us to strengthen the fourth position in the Baltic. The first three places are occupied by Russian ports: Ust Ługa, Primorsk and Saint Petersburg. It is worth noting that we were in sixth place 2-3 years ago, ahead of Klaipeda (Lithuania) and Gothenburg (Sweden)."

Regarding to load groups, in 2019 bulk cargo definetly dominated with 44% share in total volume. The second group was liquid fuels with 34% share in the total transhipment and coal was in the third place.

The Port od Gdansk reported huge decrease in wood handling by 40.4%. To such significant differences over the years 2018-2019 contributed the natural disaster in 2017.

"We are a universal port, we can reload practically any group of goods. At the moment we are focused on three basic reloading groups. These are containerized cargo, liquid fuels and coal. These are our stable pillars that allow us to carry out millions of transhipments. (... ) We constantly set ourselves new challenges, we want to be a leader on the Baltic Sea, as well as to be in the top ten European ports. It is ahead of us and I am convinced that the potential of this port, our country and market is able to lead us to our goals, that we set ourselves four years ago. " - adds Łukasz Greinke, president of the Port of Gdansk Authority.

The financial results of the Gdansk port for the last year were presented at the conference by Sławomir Michalewski, financial director of the PGA: "It was a very good year both in terms of transhipments and revenues obtained by us. The net profit of the Gdańsk port reached PLN 60 million. It is a result 20% lower than the result recorded last year, but this is related to increased expenses earmarked for, among others, repairs of hydrotechnical infrastructure, construction of new storage yards, tracks, commutes, switches, new fences that should last at least 30 years or PGA expenses related to the concept of building a central port and the sailing of the Vistula ".

In the next three years, the PGA is going to spend nearly PLN 1.3 billion on investments. In 2019, it allocated nearly PLN 390 million, of which PLN 51 million came from the European Union budget.

The majority shareholder of the Port of Gdansk Authority, holding nearly 95.5 percent shares, is the State Treasury.